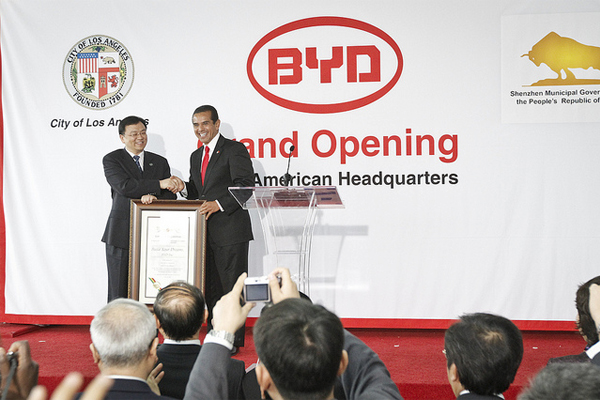 Chinese Investment in the US: BYD Auto Company

By Corrina Shuang LiuApril 8, 2012 No Comments

California, as one of the top 10 destinations for China’s foreign direct investment, has attracted $824 million from China between 2003-2010 including the market entry of BYD Auto.

With a recycled battery, silver body, black windows, and red and black leather seats, a new electrical bus debuted at the Los Angeles International Airport last October. The 40-passeneger electric eBUS-12 is able to run 155 miles on a single charge in urban conditions. The rental car company Hertz added the clean energy bus to its fleet used to transport customers around the sprawling Southern California airport.

The bus, however, was not the design of hybrid vehicle leader Toyota, or even its domestic competitor, Ford. Instead, the bus comes from BYD Auto Company of China.

“If you ask 10 random passers-by on street ‘who is BYD’, I suspect 10 will say they have no idea,” says Stella Li, President of BYD America.

But BYD, which stands for “Build Your Dream”, is no stranger to the U.S.

Started in 1995 and based in China, BYD initially specialized in batteries and became the world’s largest manufacturer of mobile phone batteries. BYD started its first U.S. office in Chicago in 2000, mainly selling batteries, cell phone chargers and keypads, marketing itself to clean energy related businesses.

With its business expanding to automobile industry, BYD opened its American headquarters in downtown Los Angeles during October 2011, announcing their goal of penetrating the market of electrical vehicles, particularly fleet vehicles. The company now has a fleet vehicle partnership with the Los Angeles Housing Authority.

“In the next three or five years we’ll mainly sell our electrical vehicles for fleet market and public transportation,” Li says. “Everything is still under planning but fleet markets are what BYD currently aims at in L.A.”

BYD’s auto industry was started in 2003 in China, where state-owned companies and joint venture businesses dominate the automobile market.

Founder Chuanfu Wang, a farmer’s son, started the company at 29 after working as a government researcher for five years. He attests his business model doesn’t rely on cheap labor, but instead competes on the values of innovation and technology. Wang bet that clean technology would be the future of automobiles, focusing on BYD’s specialization in batteries for both corporate and consumer environments. BYD positioned itself to lead in electrical vehicles technology.

As a private company, BYD thrived in a competitive market and is currently ranked eighth in vehicle sales in China with a 2.9% market share. 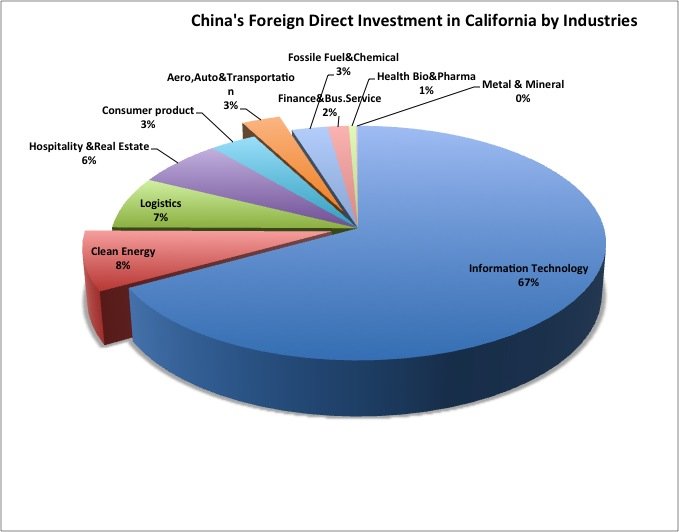 BYD’s leadership in electrical vehicles and its early success in China attracted plenty of attention from industry analysts and investors from other countries. In December 2009, Warren Buffett announced that he was investing in the company. He spent $230 million buying up a 10% stake in BYD, and described the business deal as “breaking a couple of his own rules” and admitting, “I don’t know a thing about cell phones or batteries.”

Wang was crowned China’s richest man on the Hurun Rich List in the same year.

“I don’t know how cars work,” Buffet admitted in an interview with Fortune. “But there’s no question that what’s been accomplished since 1995 at BYD is extraordinary.”

Analysts believe BYD surpassed other Chinese companies because of their dedication in technology development and quality control. Michael Austin, the vice president of BYD America said in an interview with Business Insider, “This is a Chinese company that’s thinking about the environment, and it’s thinking about how to change China. And certainly Warren said, ‘I need that in the U.S.’”

“California goes ahead of other states in green technology and it has the strictest emission standards in the nation,” says Li, “Its vision in protecting the environment matches with BYD’s.”

In early 2012, the California Air Resources Board adopted the new rules, which require that one-in-seven of new cars sold in California in 2025 be an electric or other zero emission vehicle. The plan also mandated a 75% reduction in smog-forming pollutants by 2025 and a 34% reduction in greenhouse gas emissions over roughly the same time.

Ferdinando Guerra, an economist at Los Angeles County Economic Development Center (LAEDC) says, “Green clean tech is one of the key industries we are focusing on, primarily the automobile industry. Attracting BYD to L.A. is a good example.” Guerra also pointed out China’s direct investment in L.A. county was an important way to create jobs and bring in revenue for the county.

BYD hasn’t gone directly to retail. Instead they decided to take on the American market from a different route: the fleet vehicle. According to Li, the market of individual buyers of electrical vehicles is not mature; both because consumers lack confidence in the new technology and the cost of charging the vehicle in the middle of the day still remains a major obstacle. Fleet vehicles will solve the problem to a certain degree, as Hertz rental company will spare the cost of charging by building charging stations at certain locations.

Li notes corporate and city level partnerships are also an easier way to market a brand.

“Foreign brands always need years to be accepted by consumers but if a BYD-made bus runs in the city, the name will soon be known,” Li says.

The BYD eBUS-12 will soon compete with other electrical buses, as the L.A. Metro released a request for up to 30 Super Low Emission Buses (SLEBs) or Zero Emission Buses (ZEBs) to evaluate burgeoning technologies for LA’s future bus fleet. The ultimate goal is to gradually replace L.A. Metro’s existing 2,500 buses with clean energy buses.

John Drayton, the executive vice president of Advanced Transit Vehicle Consortium (ATVC) and manager of the procurement, said ATVC had talked to 20 firms that indicated interest in the program, but Li is optimistic about the BYD’s edge over its competition.

“The most important element of electrical buses is the battery. We are the only bus maker specialized in battery,” Li said, “For those companies who had to purchase batteries from other companies, they have to spend more time adapting to the batteries.”

Listed in the Hong Kong stock exchange, BYD’s share prices rebounded in the past four months after it hit the bottom in October 2011. Investors were disappointed by its failure to deliver an electric car plan with prices peaking in February 2012.

Also, whether a Chinese company is backed by the Chinese government, is a controversial business advantage in the U.S.

“We are honored to get federal funding to test our BE 35,” says Marc Gottschalk, Chief Business Development Officer of Poterra Autos, a BYD competitor, “But in China, BYD can test 300 buses in a single city. That quantity will make a difference.”

However, BYD complained that the impression was a common misunderstanding of China’s competitive environment. As a private company, BYD doesn’t get many benefits and subsidies from the government.

“We are not the Chinese government’s ‘own son’. As an international company, we have to acclimate to how the local government works here as well.” says Li, “We achieve what we have today because of our technology and high quality.”

G.E Anderson, author of the book Designated Drivers: State Capitalism in China’s Auto Industry, has done extensive research on China’s auto industry. He admitted that compared with other state-run auto companies such as Shanghai Automotive Industry Corporation, BYD didn’t get wide support from the government. Looking forward, he thinks the top concern for BYD is neither funding nor subsidies but to “get its name out for selling good quality cars.”

“The challenge is twofold. First of all you have to prove to the Americans that the quality of the cars is good,” says Anderson, “Then you also have to show them the technology is solid.”

BYD’s downtown headquarters now mainly serves mainly a marketing function. But the next step is to open a manufacturing plant in L.A. in order to become a major player in the fleet vehicles market.

According to Drayton, L.A. Metro buys 200 buses every year to replace the retired ones. As the purchasing is largely funded by federal dollars, they have to follow the Buy American Act, which requires 60% of the product be produced in America.

To build its own American dream, BYD has a long way to go. Li states BYD believes in organic development and their strategy in the recent three to five years was conservative, which also means no radical changes will be observed in the near future.

Sitting in her office of the BYD L.A. building, Li notes the space was just an abandoned warehouse before the company moved in. The quiet building may have more in common with its previous status than with the lively forum its investors had envisioned. Still, she has hope.

Corrina Shuang Liu is a graduate candidate for a master’s in broadcast journalism.