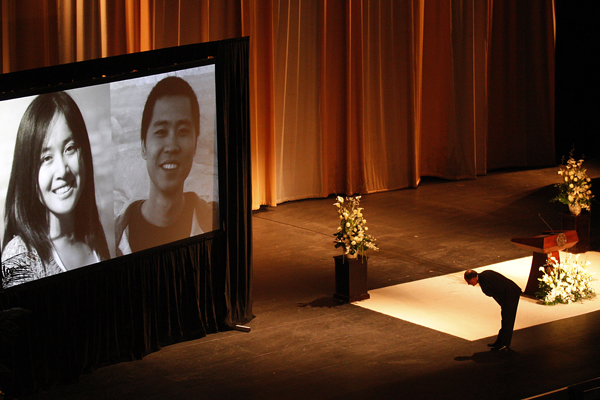 Earlier this month, two USC students from China, Ming Qu and Ying Wu, were shot and killed while sitting in Ming’s BMW near campus.

In the US the news was greeted as you’d expect for a crime of this nature. But in mainland China, it unleashed a startling response.

On popular website 163.com, Chinese netizens piled on with comments such as: “Studying in America, driving BMW, a male and a female, let them die.”

The venom this tragedy has generated in China illustrates the country’s deep divisions. It is not the monolithic, rapidly-rising superpower so many Americans fear, but a divided country – one where the gap between the haves and the have nots has widened so much, Beijing stopped publishing economic data on its Gini coefficient-a measure of inequality-over a decade ago.

For many Chinese, the fact that it was a BMW may have also pushed a button – the car has taken on an awful symbolism in China after several well publicized hit-and-run incidents, a Gatsby-esque metaphor for the clash between rich and poor.

Never mind that the BMW was secondhand and not a $60,000 luxury model as the Associated Press had erroneously reported initially. Or that Ming and Ying were not especially rich or well-connected – Ming’s father is a manager at an insurance company, his mother a teacher; Ying’s father a police investigator and her mother, a retired factory worker.

Even after more accurate reports filtered out, the reaction in China remains largely unsympathetic, judging from the Internet commentary that hasn’t been scrubbed out by censors.

Americans are, on the whole, indifferent. But it opens a window onto the vulnerable position that many of the 160,000 or so Chinese students who come to the US to study every year find themselves in – caught between an America that wants their tuition dollars but isn’t creating enough jobs for them to stay   and a China that often welcomes returning students with less-than-open arms.

These princelings, as they are dubbed in China, are but a drop in the ocean when you consider  the huge wave of Chinese who have come here to study, but the shenanigans of the few are contributing to the disdain graduates are encountering back home.

This is a big, and relatively recent, turnaround in attitude. When China began its economic expansion in the 1980s, Chinese students educated abroad were feted for their skills and knowledge, which were then scarce back home. They were dubbed “hai gui,” or “sea turtles,” as opposed to the “land tortoises”: local graduates. Now, thanks to a vast expansion in education, China is awash with college graduates, both local and international, when what its export-oriented economy really needs are more factory workers. More run-of-the-mill Chinese students are studying abroad now, not just the best and brightest. Increasingly, employers in China see U.S. returnee graduates as problematic hires, with unrealistic salary expectations. Even the advantage of being able to speak English has waned as there are now so many Chinese students on U.S. campuses that many socialize almost exclusively among themselves and never improve their language skills.

The result: the sea turtles now sometimes become “hai dai,” or “seaweed”, which in Mandarin is a homonym for “jobless returnees”. In China, these prodigal children are increasingly envied and despised. “May you guys die abroad,” posted a netizen named lishihua88 in a typical comment on 163.com.  “We should think about why a lot of families, even the poor ones, spend a lot to send their children abroad. This is meaningless. Studying abroad only contributes to American GDP, but what China gets is fake degrees like Tang Jun. (the former Microsoft China President accused of padding his CV.) Stop cheating us.”

As a lecturer at the USC’s Annenberg School, I have taught, counseled and mentored many graduate students from China, and encountered more than a few aspiring or newly-returned students when I lived in Beijing as a Wall Street Journal correspondent.

Having been a foreign student in America myself, I have great sympathy for the difficulties they face trying to chase their dreams in an alien land.

They are, for the most part, green. Most graduate students have come straight from college, with little or no working experience. They are sheltered, lacking the worldliness of American students of the same age, who get their first jolt of self-determination at 16 with their driving license. At that age, the average Chinese student is likely clambering through a crippling morass of standardized tests and shouldering the burden of being their parents’ only (because of China’s one-child policy) ticket in the lottery that is the nationwide “gao kao” university entrance exams — an event imbued with such importance that construction work is stopped, traffic diverted and parents given time off work leave to alternately coddle and bully their kids through it. (Some parents have even been known to put their daughters on birth control pills so they won’t be distracted with menstrual cramps during exams)

Even the most media-savvy Chinese students have a touching naiveté about what it means to study in America. A few years ago, one of our sharpest and smartest researchers at the Beijing Wall Street Journal bureau won a full scholarship to Columbia. I warned her to brace herself for rats and urine on the subway. She would not believe me –  how could that happen in the world’s richest country?  She later rang me, subdued, to complain that she couldn’t get cell phone coverage in her Manhattan apartment.

Most Chinese students I’ve talked to have dreams of working here in the U.S for a few years after graduation, burnishing their resumes and being able to pick and choose whether to stay or go home. Many aren’t succeeding. The job market’s brutal, and attitudes can be too. UCLA undergraduate Alexandra Wallace’s infamous YouTube rant about Asians in the library was justly derided, but it does echo what some Americans seem to think, if not say. I hear this refrain ever so often: Chinese students don’t contribute-to class discussions, or college social life in general. They are too insular. They cheat on their college admissions. They’re grabby.

In this clash of cultures, it is helpful to remember America’s historical openness to scholars from China -and the dividends it has paid. Over a century ago the Boxer Rebellion lead to the US government sponsoring China’s first generation of scholars sent to U.S. college. This first wave of students ended up building China’s first railroads and steamships, won Nobel prizes and helped create Tsinghua University, China’s equivalent of MIT. The first wave of sea turtles who returned following China’s economic opening in the 1980s-people like Charles Zhang and Robin Li-built China’s Internet.

The incomparable E.B White wrote in his classic essay on New York that the city is made great by people who are born elsewhere and come to it in a quest for something, embracing the city with the intense excitement of first love and absorbing it with the fresh eyes of an adventurer.

Apply that to Chinese students who come to America in search of a dream-the urbanites from Beijing and Shanghai, the provincials from places whose populations nonetheless exceed those of Chicago or Atlanta, the innocents who’ve dossed down six to a college dorm and never been behind the wheel of a car, the sophisticates with their Pradas and bejeweled phones, and those of more modest means, uneasily aware their parents and relatives have pooled their life savings just so they can study in the country that created Steve Jobs and Jeremy Lin.

So what about this generation, this seaweed tide?

Unlike the earlier generations of China scholars, they are not just majoring in the hard sciences. They are in creative writing programs, in art schools, even in journalism, despite media restrictions back home.

This is no small thing. Even as many Americans make the mistake of viewing China as a monolithic superpower, the Chinese, too, tend toward one-sided views of America. America the imperialist oppressor; America the violent. It’s a view that Qu’s and Wu’s tragedy unfortunately reinforces.

But there is also another dimension to the Chinese view of America. It is a country many admire as a place of hope and possibilities and opportunity, the land that created Steve Jobs and Jeremy Lin. This is the America that draws ever-growing numbers of Chinese students, who then take home a view of the United States that refutes the stereotypes.

Such an exercise of informal diplomacy on a grand scale cannot help but change U.S.-China relations. It may even change the world.

Mei Fong, formerly a China correspondent for the Wall Street Journal, is now a lecturer at USC’s Annenberg School for Communication and Journalism. Another version of this article ran in the Los Angeles Times on April 26, 2012.