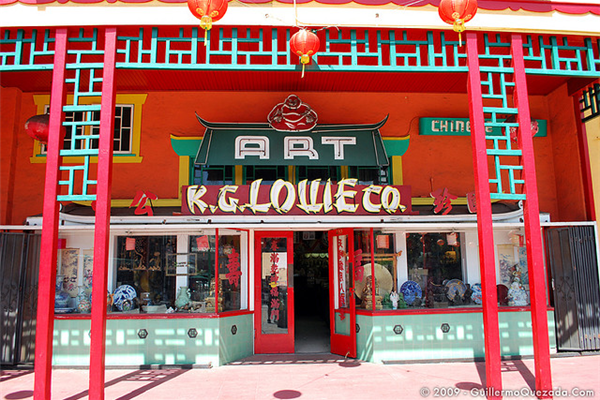 Audrey Chan lives in Los Angeles and comes to Chinatown almost every week. Instead of going to Dim sum restaurants or cheap souvenir stores, as a Chinese American artist, she’s there seeking inspiration, meeting up with other young artists and finding galleries to show and sell their work.

Chinatown as an Art colony. It’s a new side of the old town most people are oblivious to. In the world of artists, however, Chinatown is not only a destination to become inspired, but also a place to share experiences and sell artwork. As a colorful urban area with over fifty years in history, it’s not hard to understand why artists are drawn to this location.

“My introduction to Chinatown is through the art scene here. “ Chan said.

Chan described Chinatown as an incredibly active hub for experimental arts. She herself helped create an animated video piece introducing the culture and history of Chinatown in Mandarin Chinese, Spanish, English and Cantonese. The video is on show in the Chinese American Museum as part of the “Deconstructing Chinatown Exhibition.”

Chinatown is not only attractive to Chinese Americans who have cultural ties with it.

“It’s like a secret world for artists,” said Chan, sitting in the Vie Cafe located in the Chinatown plaza. “Every time I come into this cafe, I’ll run into artists hanging out here. “

Heimir Bjorgulfsson is a photographer from Iceland. He has been living in Chinatown for two years. His photos tell the story of Chinatown seen through the lens of his camera. What fascinated him about Chinatown is the way both history and present coexist in harmony.

“In Iceland, they tear down old things too quickly,” said Bjorgulfsson, “Here, it is very different. You can see the typical Chinese architectures and also modern buildings that are very fancy.“

It’s not just the cultural features that draw artists here. Actually, on Chunking Street, there are more than five galleries featuring and selling the work of artists.

Mat Gleason, famously renown as the “red hair” art critic, owns his gallery at the end of Chunking Street, selling mostly modern and experimental art. He claimed that cheap rent was a major decisive factor to open his gallery in Chinatown.

“It’s almost one fourth of the price of better neighborhoods such as Culver City and Beverly Hills.” Gleason said.

Also, the cluster effect helps his business as people can park one time and visit several galleries.

The gallery holds exhibits representing different artists monthly. Currently, only devoted art connoisseurs know about the existence of these galleries. Sales in volume vary from time to time but the business is steadily turning a profit.

“People who really understand art can tell that what we sell here is good stuff, “said Gleason pointing at a painting on the wall, “this one is booked already.”

Optimistic about the future of his gallery, Gleason hopes to see more visitors as people start to discover this hidden side of Chinatown.

Gleason cheerfully noted, “I notice that, when people find out the galleries, they do come back.”