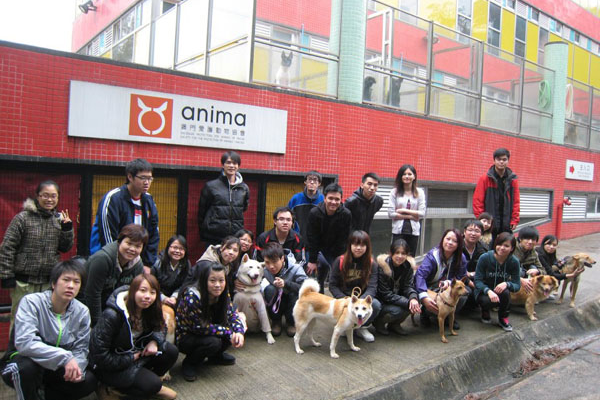 Writers Chan Mei-I, Emily Lo and Sarah Lai visit Anima, an oasis for animals in a land where animal protection laws do not exist.

On a quiet, tree-lined street in Macau sits a small building. Inside, over 200 dogs and cats– all of them rescued by the Macau Society for the Protection of Cruelty to Animals are housed in this locally known place, Anima.

Unlike neighboring Hong Kong, Macau has no laws against mistreating animals. This led Albano Martins, a Portuguese businessman and long-time Macau resident, along with a group of friends, to take matters into their own hands by establishing Anima, a Society for the Protection of Animals in 1997.

“There are no laws to protect animals,” said Martins, “so someone had to do the job. Animals are like people. They have feelings like us.”

Currently, the Civil and Municipal Affairs Bureau’s animal control division is under scrutiny for their lack of sufficient inspection on canine treatment. Specifically, the sport of greyhound dog racing and the euthanasia involved after they can no longer run has sparked enormous international debate.

Martins argues that the lack of control and protection of animals also hurt citizens as it contributes to the illegal import of dogs, increase of strays and the risk of spreading diseases such as rabies.

Many animals arrive at the shelter in terrible condition – scrawny, hungry, dirty, frightened, some crippled or missing limbs. One dog was confined in a shop where the owner provided food and water just once a week. Despite modest resources, the all-volunteer Anima staff has nursed these inflicted victims back to health. Each animal is cleaned and well-fed, getting two hours of exercise daily.

Anima encourages local people to adopt, with monthly adoption fairs outside the center, and adoptions available every day in the shelter. Martins uses his experience to educate the public, emphasizing that animals are not like toys that can be purchased on impulse and discarded on a whim. Some potential adopters have been rejected for fear that they may mistreat an animal. Those who are accepted undergo careful checks including visits to their home by Anima staff. 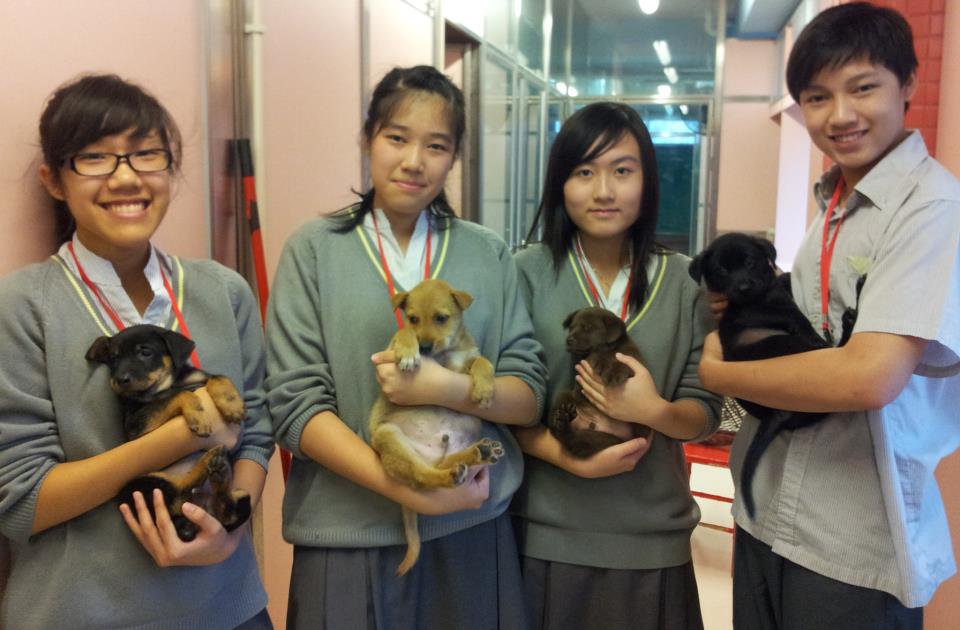 Student volunteers from School of Nations holding four of the 26 new puppies ready for adoption.

“We have to have a contract with animals for life,” Martins said. “We have to be with them just like we would if they were human.”

Peter Li, Humane Society International China Policy Specialist warns that, “Chinese cities are all experiencing a rising number of abandoned animals,” and asserts that, “for Macau to tackle this problem, we strongly believe that the Macau Autonomous Region government should devote resources directly or through local animal protection groups to public education, sterilization, and stray animal management.”

The society is now exploring ways to expand its facilities to cope with the increasing demand; it is also continuing to lobby for the Macau government to make legal protection of animals a much higher priority.

“We have asked the government every year since 2005 to pass a law,” Martins noted. “But up to now they haven’t done so.”

In the meantime, Anima provides the best hope and care for many of Macau’s mistreated animals.

More information and stories of saved animals available on Anima’s facebook page at https://www.facebook.com/MacauAnima or e-mail them at: anima@macau.ctm.net