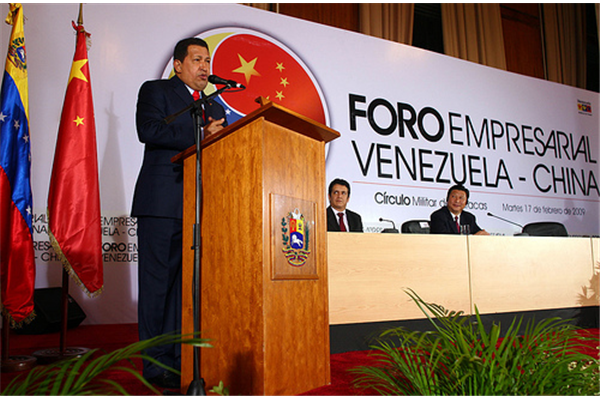 What Chavez’s Death Means for China

An examination of economic intricacies and the implications of Chavez’s death for Chinese and Venezuelan relations.

With a history of ruling the country for 14 years despite his young age, Chavez has been described as a leader of all sorts from charismatic to tyrannical. His capitulation to cancer after a two-year battle and the inevitable call for an election marks a new era for Venezuelan politics.

Official notes of condolences from neighboring Latin American countries poured into Venezuela minutes after the announcement, while analysts deliberated a substantial shift in regional politics and oil trade.

How does this impact the dynamics between Venezuela and China?

Diplomatic relations between the two countries began on June 28, 1974 and has since achieved 460 bilateral agreements, most of which were confirmed under Chavez.

“We have already sent out our condolences to the late leader,” said Lu Fengding, ambassador and member of the Foreign Policy Advisory Committee of the Foreign Ministry of China, “we’ve regarded him a friend and we’ve maintained a good relationship.”

China in the recent years has played a significantly larger role in Venezuela’s economy and infrastructure for a valid resource in return: oil.

The strategic exchange between the two nations has allowed the Venezuelan government to receive close to $80 billion in financing and direct foreign investments. Chinese investors and enterprises propel projects involving oil such as the development of Orinoco’s oil belt, which is considered to be one of the biggest hydrocarbon reserves. According to Xinhua News, the belt alone extracts close to 230,000 barrels a day, and with Russia’s recent investment of $46.9 billion, the capacity is set to increase by 700,000 to extract 930,000 barrels a day. The anticipated returns on investment from Venezuela’s oil extractions are immense, and the pressure to produce has been mounting with each added foreign investment.

“I doubt very much that the Venezuelan government would want to alienate Chinese investors at this difficult transition point,” said Doctor Carol Wise, associate professor at the USC School of International Relations and author of China, Latin America and the end of Neo-Liberalism.

Chavez has promised the Chinese government to return 1 million barrels of oil and the PDVSA (Petroleum of Venezuela) states that they send 518,000 barrels to China daily. Since the Venezuelan leader’s passing, there have been no mentions of oil production slowing down. The political instability resulting from Chavez’s death, however, may delay the number of new investments into Venezuela until a new leadership is confirmed.

In addition to oil, the China Development Bank has decided to lend $46.5 billion to Venezuela and the money has been carefully allocated to various projects nationwide.

Just last year in September of 2012, Venezuela and China agreed upon developing the mining industry of Las Cristinas, an area considered to contain the largest untapped gold deposit in the world. China International Trust and Investment Corp. (Citic) is behind the project and while financial negotiations have yet to be revealed, the reserve is expected to yield close to 17 million ounces of gold.

According to the PDVSA 2011 Annual Administration Report, technological advancements have also been made in Venezuela with support from the China Petroleum Technology and Development Corporation (CPTDC) since 2010 to improve production levels by 125%.

Other projects and areas of investment that are listed within the fact sheet under the Strategic Alliance for Joint Development between Venezuela and China include construction on the Simon Bolivar satellite, irrigation systems, agricultural processing plants, housing complexes, railway infrastructure, and Venezuela’s acquisition of Chinese built trainer jets and ground radars.

Data from the Center for Economic and Policy Research shows that China owns half of PDVSA’s $36 billion debt and with the various investments and joint projects involved, China has become the most involved nation outside of Latin America. Chairman Fu Cheng Yu of Sinopec, Asia’s biggest refiner, has also mentioned that the death of Chavez will not affect the company. Sinopec’s 2012 third quarterly report showed a 26% increase on overseas oil production from 2011.

“I don’t think we can foresee any negative changes because of the leadership change,” said ambassador Lu, “especially because the bilateral cooperation is based on mutual benefit.” With such intimate financial relations, and the insatiable thirst for energy, China’s continued investments are unlikely to sojourn.