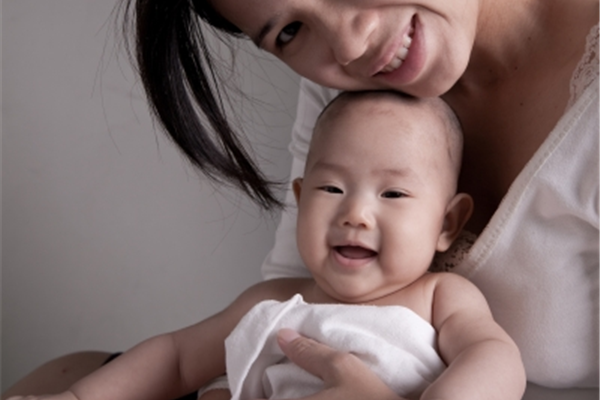 Developing a Sustainable Population: What China can Learn from Singapore

Writer Patrick Thelen carefully assesses the nature of Singapore’s population predicament and projects the looming population changes for China in the future.

On February 16, approximately 4,000 Singaporeans staged a demonstration protesting a government plan aimed at increasing legal immigration, voicing concerns that it will worsen already strained public services and increase the cost of living. Although protests are common in other parts of the world, they are practically unheard of in Singapore, where the ruling party -–in power since 1959-– maintains strict control over political dissent.

Among the plan’s most controversial statements –detailed in a 76-page document known as the Population White Paper– was an announcement that the island`s population of 5.3 million could grow by as much as 30% to 6.9 million by 2030, mainly through foreign workers to offset a chronically low birth rate.

Singapore`s birth rate has been falling due to later marriages and fewer children. At the same time, Singapore’s life expectancy has increased from 66 years in 1970 to 82 years in 2010, making it one of the highest in the world.

This combination of falling birth rates and increasing life expectancy may result in an aging and shrinking citizen population and workforce. The complexity of this issue increases when we consider that a large percentage of the population does not want the government to continue accepting large numbers of foreign workers.

Singapore’s struggle to address its shrinking birth rate is a microcosm of what other countries around Asia are facing. Japan has tried for years to reverse its aging demographics. The country is currently the oldest in the world with 23.9% of its 127 million population over the age of 65.

Despite being the world`s most populous nation, China is facing a formidable challenge as a result of its three decades-old one-child policy, coupled with rising affluence. In 1980, one out of ten Chinese were over 60 year old. By 2050, one out of four Chinese is expected to form part of this age group. 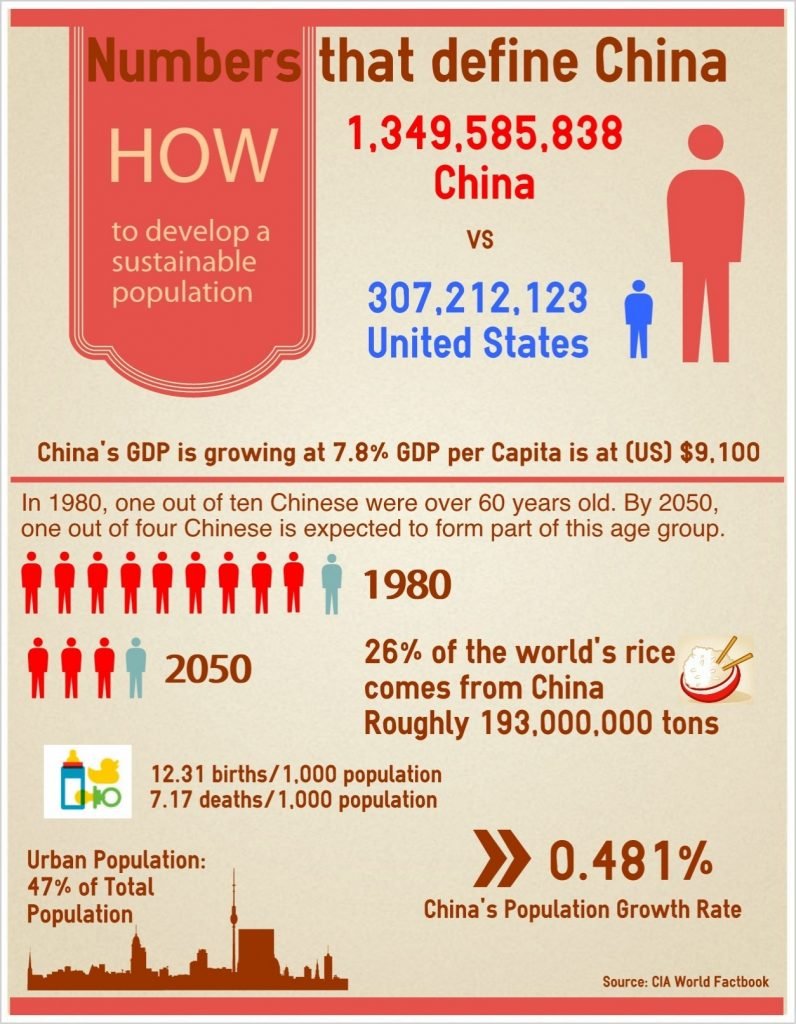 According to Beijing’s National Bureau of Statistics, China`s working age population -composed by those aged 15 to 59- totaled 932.27 million last year. That number represents a decline of 3.45 million from 2011. China’s working age population in 2012 was 0.6% less than in 2011 and the number of workers will decrease every year until about 2030.

Data in the Population White Paper shows that between now and 2030, the number of retired citizens, aged 65 and above, will triple to 900,000, more than a quarter of the current citizen population.

Singapore currently has 5.9 working-age citizens for each citizen aged 65 and above. Assuming current birth rates and no immigration from 2013 onwards, this ratio will fall to 2.1 by 2030 (See Chart 1). 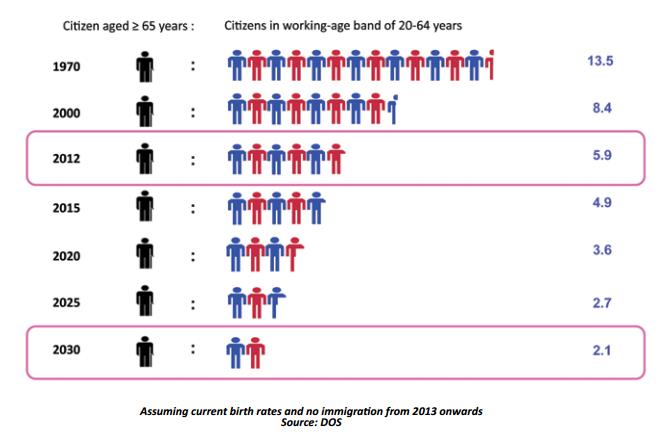 Chart 1: Declining support ratio for people aged 65 and above

According to the government, a declining support ratio would create a heavier tax burden on a smaller base of working-age Singaporeans. The economy would become less vibrant and innovative, making it more difficult to match the higher aspirations of a better educated population. In the absence of local opportunities, the government fears that Singaporeans may seek opportunities elsewhere.

Singapore`s total fertility rate (TFR) has been on a general decline. The last time that the TFR of the resident population was above the replacement level of 2.1 was in 1976. In 2011, the resident TFR was 1.20 (See Chart 2). 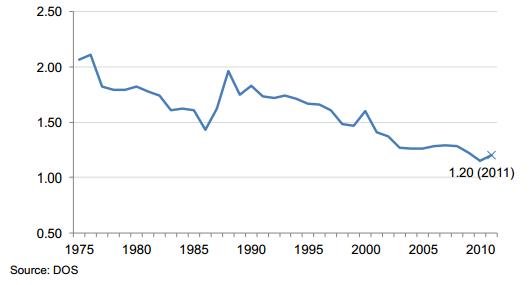 The declining trend in TFR is a complex issue for Singapore, and is attributed, in part, to the fact that more people are staying single or getting married later. Among citizens aged 30-34 years, the rates of people who were single increased from 33% to 44% for males, and from 22% to 31% for females.
During this same time period, the median ages of citizens marrying for the first time have also risen, from 28.5 to 30.1 years for men and from 26.1 to 27.8 years for women. As Singaporeans marry later, they tend to have fewer children. The proportion of women having one child or none is rising, from 21% in 2000 to 26% in 2011.

Similarly, China’s TFR and birth replacement rate has been on a steady decline since 1970. The China Daily newspaper reported that the average marriage age for Chinese citizens have been growing older as well, a trend that seems to stem from changing cultural and societal expectations. In Shanghai, the age at which women married averaged at 29 while the number was 32 for men. China’s family planning rate has been extremely successful, however, more lenient today allowing for two children per married couples.

Though China’s economy is still fueled by people who leave the countryside to work in cities, the burden of caring for an aging population, in a country with no real social safety net, is expected to weigh heavily on China`s future prosperity. Chart 3 shows just how much China’s fertility rate has decreased over the past four decades. 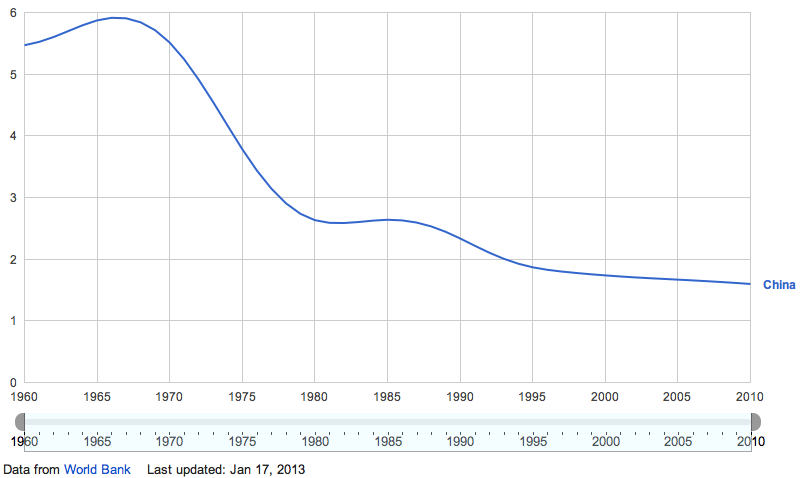 In search of a solution

According to Dowell Myers, professor of urban planning and demography at the University of Southern California, Singapore “needs to develop a population plan that can be sustained over 50 years. Once they grew this large cohort of middle-aged residents they created future needs when that group reached old age. Now they need to match that cohort with a suitably large new group of middle aged residents.”

Visibly concerned with their low fertility rate, the government will boost its annual budget on marriage and parenthood to S$2 billion from S$1.6 billion in 2012. Their money will be spent on matchmaking, housing grants, subsidized childcare, fertility treatments and cash gifts for babies.
Social policy-makers do not view these measures favorably. This type of policy will not “bring the fertility rate back to replacement level,” said Theresa W. Devasahayam, a researcher at the Institute of Southeast Asian Studies, to Bloomberg. “The government is in a fix. For the moment, it has little choice but to keep importing labor and keep the country’s doors open to foreigners.”

The problem with Ms. Devasahayam’s proposal is that having too many immigrant workers depress wages and reduce the incentive for firms to upgrade workers and raise productivity.

Increasing output by increasing labor supply eventually runs into the problem of diminishing marginal returns. As stated in an article written by Linda Lim, a Singaporean who teaches strategy at the University of Michigan, the easy access of cheap foreign labor in a small country in which land is a scarce resource, has increased “residential housing and commercial rental costs, and congestion costs especially in transportation.”
Higher costs of living should eventually translate into higher nominal wages. The problem that Singaporeans have been facing is that wage increases have been held down by the high supply of foreign labor. For this reason, Ms. Lin argues that the country should engage in a policy that tightens foreign labor supply and increases labor productivity.

The government seems to agree with this assessment as it recently decided to cut the quota for foreign job-seekers and impose higher levies on companies that hire low-skilled foreigners. However, they have also said that the number of foreign workers cannot be reduced drastically. Without immigration, the government says the citizen population will start to shrink from 2025 onwards.

According to Mr. Myer, “labor force growth is good for the economy, but so is rising per capita incomes of consumers. Singapore needs to strive for a more balanced approach, allowing for modest population growth while maximizing productivity of its current population.”

Mr. Myer also believes that the country should prepare itself for the future by “slowly reducing the benefits assigned to the elderly and raising their eligibility age, and increasing the education and training of young people in Singapore so that they can each carry a heavier proportionate weight of taxation to support old people.”

As countries like Singapore, Japan and Sweden tackle population decline through policy implementations and incentives, China must focus on their unique population dilemma as well. Despite being the most populous country in the world today, India will take the number one seat within the next decade. As a result of the one child policy, the male to female ratio has become disproportionate, leaving an increasing number of Chinese males single. Similar to Singapore, shifts in societal and cultural norms for bearing children are reflected in the birth rates as they have fallen while the average life expectancy has risen nationwide. An aging China correlated with the declining youth translates into a potential crisis. As population and demographic landscapes directly impact the societal and economic dynamics of a country, it is imperative that China learns from the trials and errors of countries like Singapore that are actively searching for a solution to their population predicament.