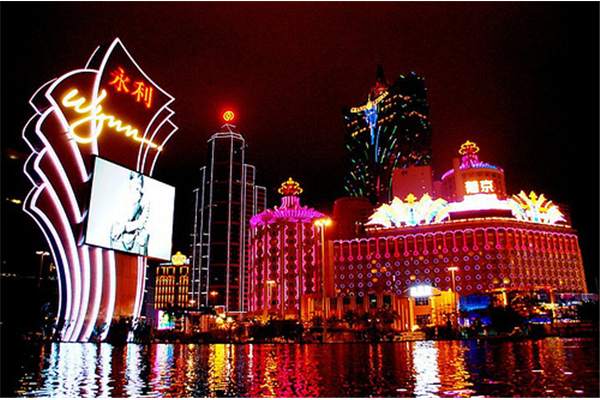 Searching for the Chinese Dream in the City of Dreams

Macau is a city of luxury, gambling and pleasure. In contrast to the neon lights, migrant workers from China work in the shadows to support the city’s growing economy.

It is six o’clock in the evening, the time when dazzling lights of the largest gaming hub in the world begin to light up the sky. Throngs of Chinese tourists elbow their way into the casinos of Macau, the former Portuguese colony on the coast of southern China, inspired by dreams of luck and fortune. But not Zhang Yikuan, a 47 year-old migrant worker, who hurriedly drags a small cart out of Macau across the border to the Chinese town of Zhuhai in search for cheap food and commodities.

Working in the City of Dreams

Macau is a notorious gambling destination. Last year, visitor arrivals reached 28.1 million. They brought $38 billion in gambling revenues, an increase of 13.5% compared with the $33.5 billion in 2011 despite the stagnant global economy. Visitors from Mainland China make up 60.2% of total arrivals, increasing 4.6% year-on-year.

Beyond tourists, Macau has also attracted large numbers of Chinese migrant workers like Zhang Yikuan, who have built the pleasure palaces where so many of their fellow Chinese spend vast quantities of money. “Generally I earn 11,700 mops per month ($1463), with overtime pay, nearly 13,000 mops ($1626)”, Zhang says, “it is much more than my salary in the mainland.” Statistics from the Human Resource Office of Macau’s government showed that at the end of February 2013, there were 68,273 mainland workers, accounting for over 60% of non-local employees in total. Of these numbers, construction workers made up nearly a quarter, equaling 13,340.

With non-stop casino expansions, a shortage of labor remains a major obstacle to sustaining economic growth, according to Bloomberg News. “Macau’s local labor force is not sufficient to cope with the recent projects and the city needs more outside workers,” said Fung Kwan, head of the Department of Economics at the University of Macau. 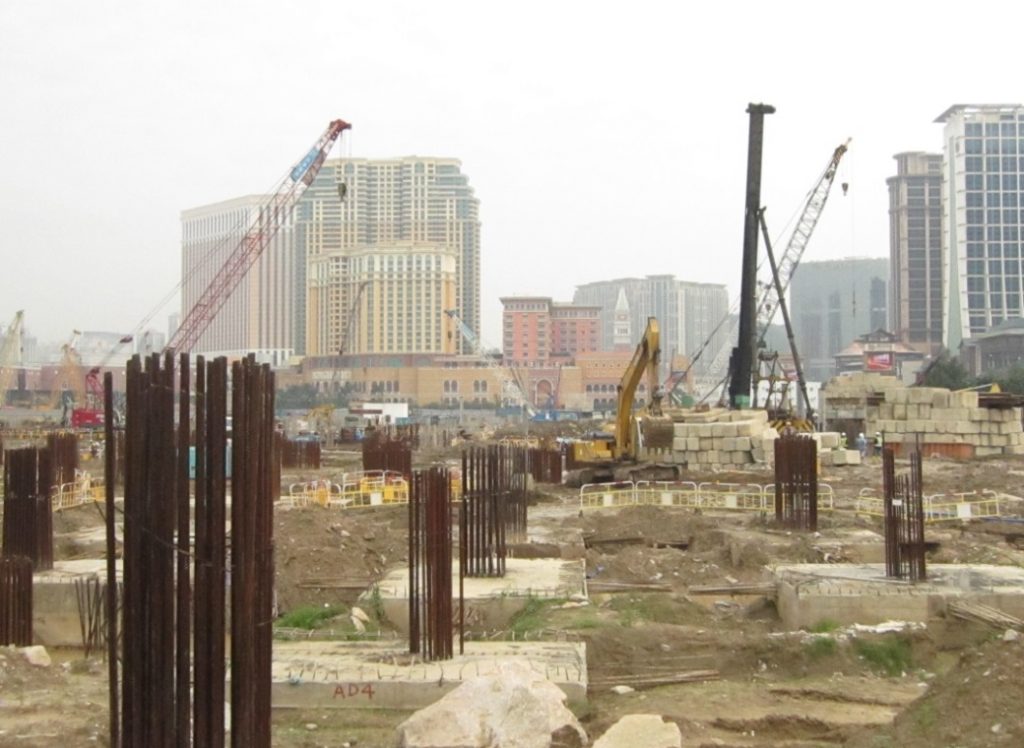 The work yard of Studio City, located at the Lotus Bridge immigration center adjacent to Hengqin, an island in Zhuhai which is planned to open around mid-2015.

Like all the other migrant workers, to get his job in Macau, Zhang had to pass a labor ability test in China conducted by a labor service company and had to pay 8,000 Yuan ($1,295) as an agency fee to the same company. As of May 2012, he works eight hours per day seven days a week in Macau.

His wife, who is ten years younger, is an elevator operator in Suzhou, the second largest city in Jiangsu Province and earns around 2000 yuan a month. His 20 year-old son has also been working as a construction worker in the Anhui Province since graduating from high school. “I can only go back home once a year at traditional Chinese New Year”, Zhang says with a long sigh, “When I miss my wife and son, the only thing I can do is to call them, despite the rather expensive phone bill.”

Many migrant workers from mainland China rely on Zhuhai for daily necessities. They regularly purchase food, clothes and other items from the neighboring city, as prices are much cheaper there. In Zhuhai’s port market, for example, a 10-kg bag of rice costs 30 yuan (about $5), while a one-kg bag of rice sells for more than 15 MOP (about $2) in Macau. Like thousands of migrant workers, Zhang travels to Zhuhai each weekend. “I cook by myself every day, and I bought these clothes in my hometown as the price here is too high”, he says as he lights a cigarette. “I have to send 7,000 to 8,000 yuan each month to my family”.

On this particular weekend, Zhang had three tasks in Zhuhai: purchasing a bag of rice, fixing his cheap mobile phone and exchanging 1000 Hong Kong Dollars to Chinese currency in the black market. Around 7 pm, on his way to the port market, he received a call from his wife. He spoke softly to her, smiling warmly as he said “take good care”.

Despite having a wife at home, Zhang, like most Chinese migrant workers in Macau, has a girlfriend: a Vietnamese woman who works as a domestic servant. He shyly displays a stone bracelet on his wrist, “It’s a gift from my girlfriend” he said. They live together, share the same room and a stable relationship; Zhang pays his girlfriend 500 MOP a month (about $65) to do the housework. “Actually, it is just like hiring a maidservant who washes clothes and cooks dinner for me,” He said, “Life is much easier this way.”

In a private mobile phone repair shop, Zhang took out his old-fashioned 2G cellphone valued at around 400 yuan (about $65) to the repairman. “The repairman here always helps me download songs from the Internet and my favorite songs are “Missing Hometown” and “Song of Vagrant” and then, pointing to the songs in the screen admits, “whenever I feel lonely or bored, I will listen to the music both for relief and entertainment”. 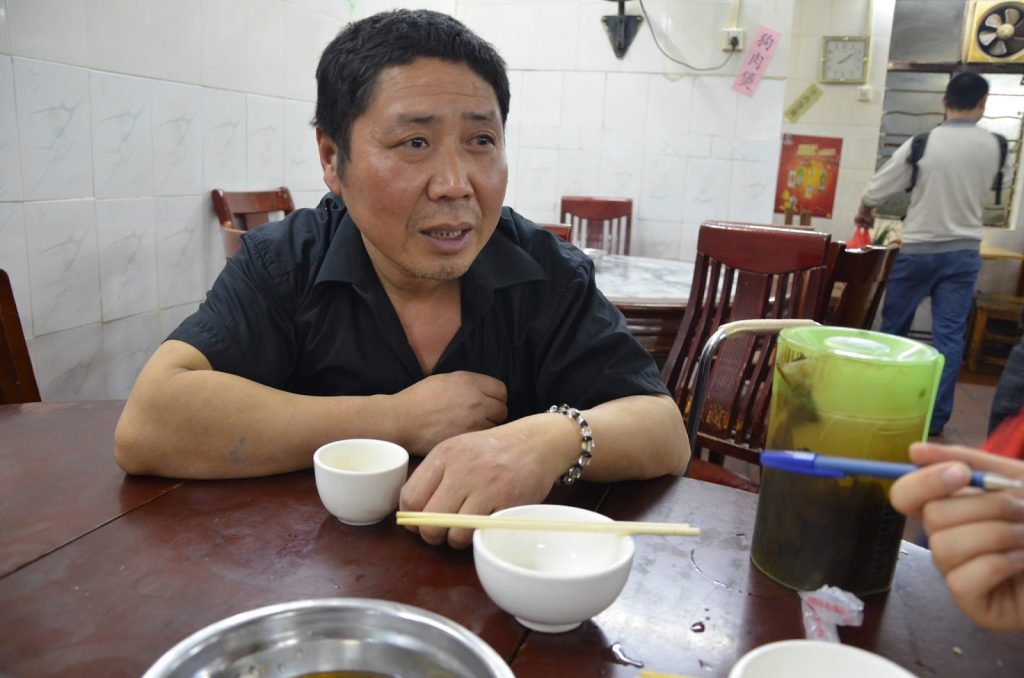 Alienated from the Mainstream Society

Drifting on the edges of the casino-driven Macau, migrant workers often feel alienated from the mainstream society. “I sometimes roam around the casinos,” Zhang says, “but only stand aside watching others gambling, because if I lose in gambling by using my hard-earned money, I would feel extremely regretful for the stress and difficulty I have borne, for my old mother at home, and for my wife and son who are making livelihood outside. I am not a part of Macau. I am here only because I can earn more than my counterparts in Mainland China.”

Migrant workers like Zhang generally are paid barely half of what a local would earn for similar work. An even greater problem, however, is that they are not integrated into Macau society.

Widely regarded as an “alien” population, they are often accused by some locals of “exploiting our resources” or “plundering our job opportunities.” These sentiments have been manifested every year by big demonstrations on May Day in Macau’s main square, according to Mr. Choi Hang Keung, assistant professor at the Department of Government and Public Administration, University of Macau.

Limited to the construction area, Chinese migrant workers have few resources and fewer opportunities to fight for their rights. “They have to wait until the last moment when they are leaving Macau to protest. Some have risked their lives by jumping off buildings to pressure the company or government,” Mr. Choi added.

A Chinese Dream in the City of Dreams

The concept of the “Chinese Dream” being discussed widely in China now also casts an ironic shadow on thousands of migrant workers in Macau. “How can a man like me in his mid-40s have a dream”, Zhang Yikuan asks in mocking tones. “I came here just to earn more money for my family. My dream is on my son. My biggest dream is to see my son get married. Now we have a three-story house in my hometown, and we still owe him a car for marriage.” Zhang has decided not to work for others as soon as his son gets married.

The government plays an important role in improving the working conditions for migrant workers. According to Mr. Choi, the government needs a long-term policy for them to develop a sense of belonging to the community. He also hopes that migrant workers will organize a union to defend themselves.

“Macao is a very wealthy community, but the wealth was created by exploiting substantial groups of migrant workers. One in three working people are from outside, they have a contract of two years and after that they have to go home.”

The story of Zhang Yikuan exemplifies the situation faced by migrant workers throughout Macau. “It is every Chinese migrant worker’s dream to earn enough money in Macau to afford children’s’ education, even a house for marriage, and then return to their roots,” Mr. Choi added, “Unfortunately, normally they will never be able to earn enough to go back home.” 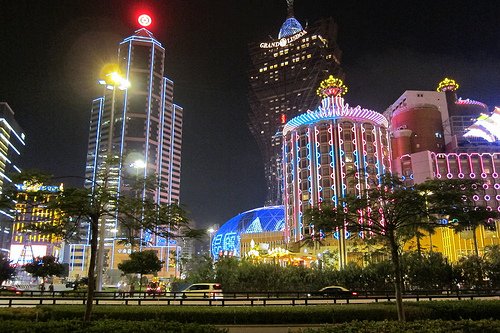