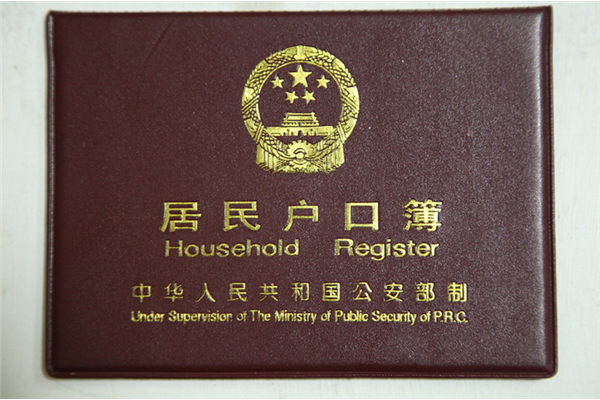 The Hukou system户籍謄本, also known as the house registry system must be reformed to keep up with the societal and migrational changes of China’s population.

Xiao Cai, a family caretaker sprinkles garlic on steamed fish for dinner as she explains her Hukou situation.

The Hukou system户籍謄本—also known as the household registration system– was previously intended to assert population control. Today, however, it has become one that requires reform.

Hukou registrations define all individuals and cities in China and have shaped the nation’s social structure for centuries. The Hukou system was strictly enforced by the Communist party primarily as a method for classifying individuals into one of two categories—urban or rural. Once a family registers their Hukou, they are bound to the healthcare, education system and social security of their registration city/town. Every birth, death, marriage and relocation is registered through the Hukou system, giving the government collective control over just about everything from urban migration to food rations.

As globalization catches up with China and opportunities in big cities grow faster, migrant workers are forced to abandon their social benefits from their hometowns to join the urban workforce.

“I work and live here alone,” says Xiao Cai, “I can’t bring my daughter because her Hukou won’t allow her to get public education here in Shanghai and I can’t afford private tuition.” 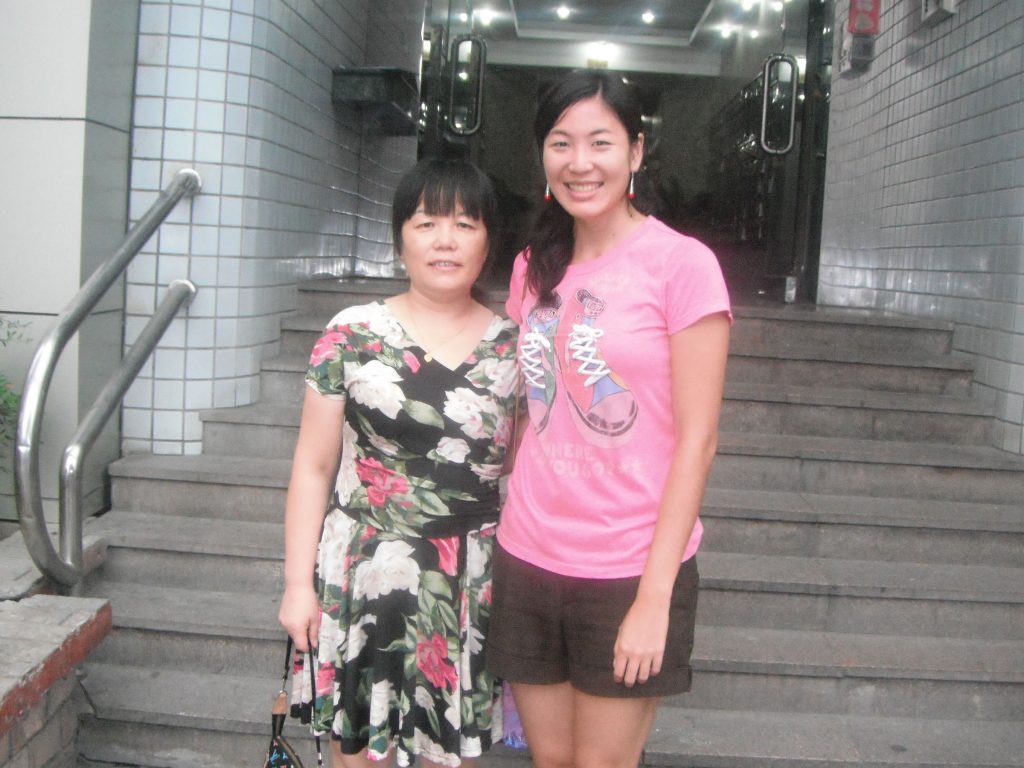 The writer with Xiao Cai at the Shanghai apartment complex.

Xiao Cai isn’t the only migrant worker living apart from family and working without access to social benefits. Shanghai alone encompasses about 11 million migrant workers in addition to its population of 13 million.

China as a whole has 279 million migrant workers, equivalent to over 20 percent of its total population, working in big cities as second-class citizens. In fact, China’s urban population has surpassed its rural population for the first time in 2011 with close to 691 million people living in urban areas in comparison to the 656 million in the countryside. As of 2012, the number has increased to 711 million, a 1.3% increase accounting for 52% of the total population while the rural side has decreased to 642 million.

“They’re almost like the undocumented worker in America in some way,” said James McGregor, CNBC commentator for China and APCO’s senior counselor during the 2013 Global Conference. “This is China’s next big opportunity.” 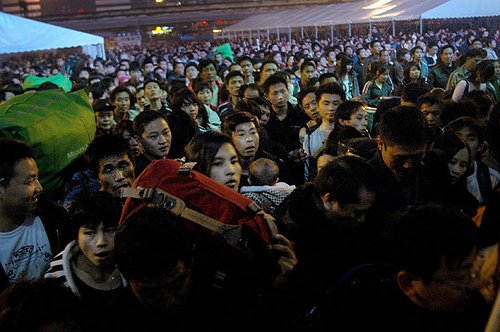 According to Mckinsey & Company’s forecast, the urban population will grow to 850 million by 2020 with 20% of that population comprising of first generation migrant workers from rural areas.

“Li Ke Qiang is going to be all about urbanization,” continues McGregor, “the great social justice story in China is that it must change its citizens into consumers or they stop growing. If you’re going to make China into a consumer economy, they’re the new consumers.” 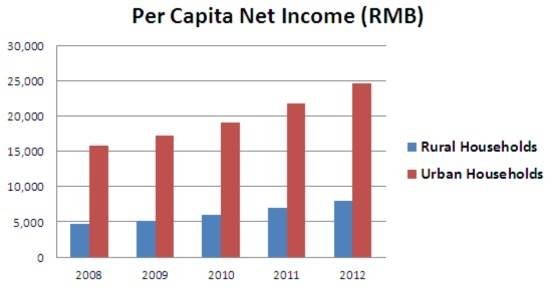 With waves of migrant workers flocking into the city, however, there will be social consequences and population imbalance. How can the Chinese government address this glaring issue?

“Tie in urbanization with industry based development,” says Perry Wong, China researcher at the Milken Institute. “People will invest in these tertiary cities if they see potential.” Instead of flooding China’s tier one and two cities with migrant workers, Wong asserts that the government should incorporate industry building into urbanization. He also cautions that this can only be appealing if the Chinese government opens up the financial markets, specifically the equity and debt market, for private sectors to invest in urban development.

To take full advantage of direct investment opportunities and the Hukou reform, Wong proposes the idea to “tie industry growth where labor is still cheap and land is still abundant.” Rather than continuously relying on the economic output of main cities, especially those on the coast, the government should develop and provide the infrastructure for businesses and industries to support the growth of tertiary cities.

Premier Wen Jiabao has stated that consumption will be the key factor for China’s growth and McGregor couldn’t agree more as he repeated numbers retrieved from the World Bank, “If you can take 10 million of these urban workers to consume you can drive 6% growth in China for 20 years or more.” China will spend $40 trillion yuan ($6.4 trillion) to aid people to migrate into different cities and drive domestic consumption. 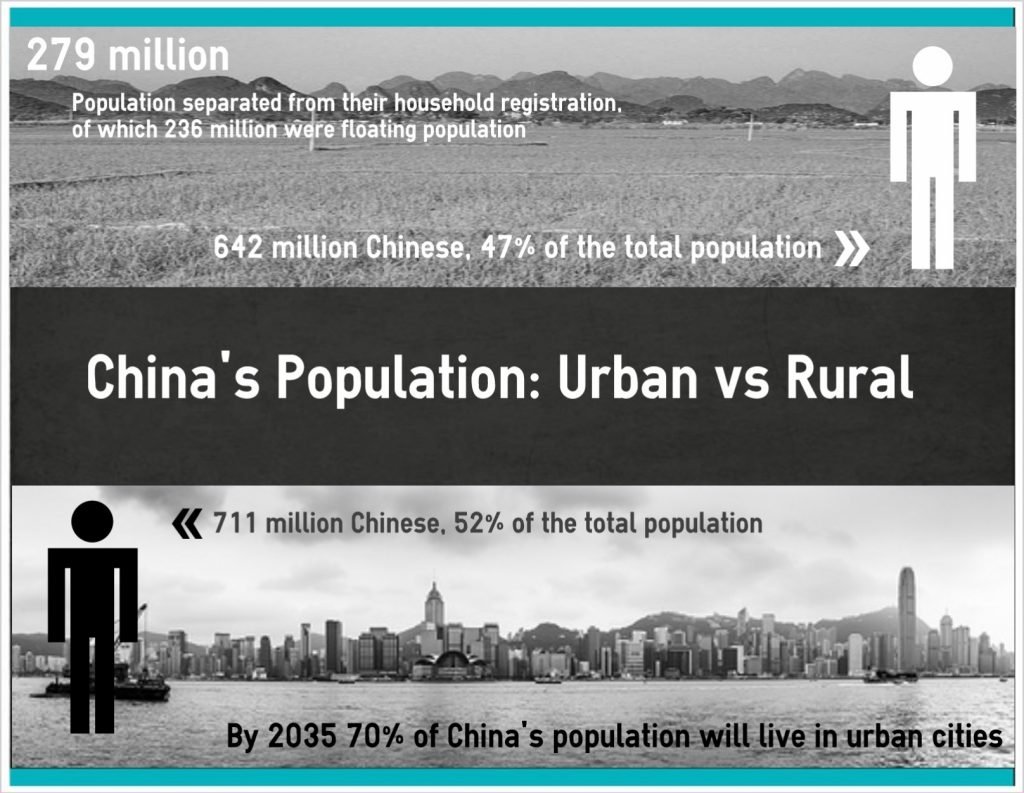 Data source from the National Bureau of Statistics, 2012 Statisical Comunique

There is little room for error on this national project as a failure could result in colossal numbers of underclass urban workers and heavy fiscal burdens on local governments in certain cities. Furthermore, governments must be mindful of urban residents who must adapt to the influx of rural workers into their city. These obstacles make the Hukou reform a political, economic and social challenge.

Wong believes that, “there is no model in China. It’s one experiment after the other.” If this is the case, the Hukou reform will be one of the biggest and riskiest experiments that the nation will undertake.

In the meantime, however, Xiao Cai continues to work for families across Shanghai while sending money back to her family. She hopes that one day, her daughter will be able to join her in the big city not simply as a worker, but also as an official resident.