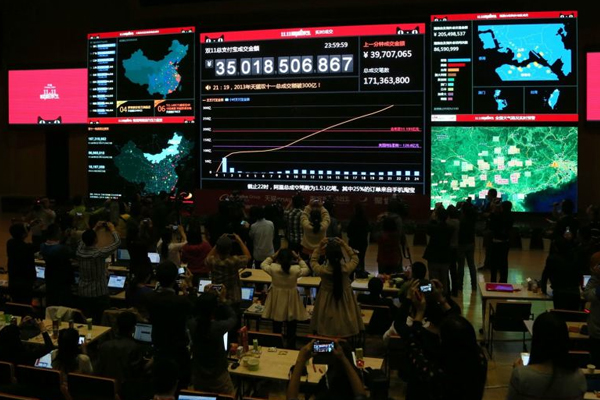 Chinese Consumers Get Cozy With Online Shopping on Singles’ Day

China’s “Singles’ Day” has seen e-commerce grow to over USD$5 Billion, dwarfing “Cyber Monday” in the US.

China’s growing middle class and its campaign to stir domestic consumption is reflected in the cyber-shopping event known as Singles’ Day. Comparable to Cyber-Monday in the United States, November 11 is when Chinese shoppers scour the Internet for the hottest deals. Despite big differences in their origin, both events demonstrate the dramatic global take-up of e-commerce. 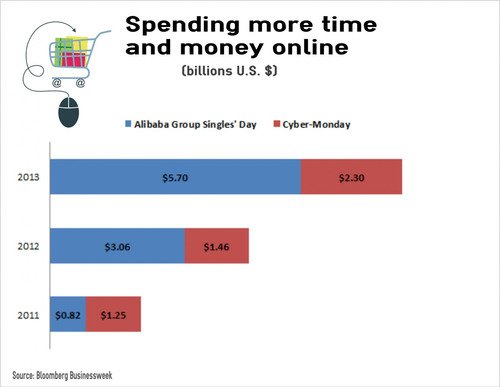 Initially an occasion for unmarried men to lament their single status by drinking together, Singles’ Day has evolved into a festive occasion. Seeing an opportunity, Alibaba, China’s leading online retail site, coopted Singles Day, turning it into a “Hallmark holiday” answer to Valentine’s Day and encouraging singles to splurge on themselves. Products ranging from consoling body pillows to laptop computers were snatched up online, and Alibaba drew more than 400 million unique visitors to its nine affiliated sites. Together, they spent $5 billion—$500 million of it in the first 20 minutes after midnight.

In the U.S., this year’s Cyber-Monday spending amounted to a record-breaking $2.3 billion, according to Bloomberg Businessweek. A large portion of the purchasing was done on mobile devices, a trend that is itself transforming e-commerce. Of course, the disparity between the U.S. and Chinese populations makes it hard to compare Singles’ Day and holiday e-shopping stateside. What we can tell from the numbers, though, is that despite what we hear about a Chinese economic slowdown, its demanding consumers can turn out by the hundreds of millions, ready to spend.

Factors that influence Chinese online spending habits include the adoption rate of credit cards. Unlike the U.S., where most families and individuals own at least one, spending borrowed money is a relatively foreign concept in China. Going against the traditional values of hard work and diligent saving, the Chinese today are increasingly embracing easy money. The Boston Consulting Group estimates that China’s credit card receivables have been rising 40 percent annually since 2009, with the potential to reach $397 billion USD by 2015. Most of this is happening in the coastal metropolitan zones, suggesting that retailers can expect a higher rate of spending growth inland.

By and large, the data displays optimistic trends for businesses trying to crack the code of Chinese consumerism. A few notes of caution, though: As mentioned above, getting people to spend more than they save is a hard sell in many regions of the country. Consumer lending is still relatively thin, although government and banking initiatives will make this practice more robust. In addition, the law of large numbers will come into play, as it has in America. The growth rate of Chinese e-commerce is sure to decelerate, even as the pie continues to grow overall. In the next few years, we’ll be eager to see the strategies Chinese marketers invent to get their piece of it.

Chia-Ling Melody Yuan is a former Managing Editor for US-China Today. She now works as the Social Media Coordinator at the Milken Institute.


This article originally appeared on the Milken Institute Tumblr.