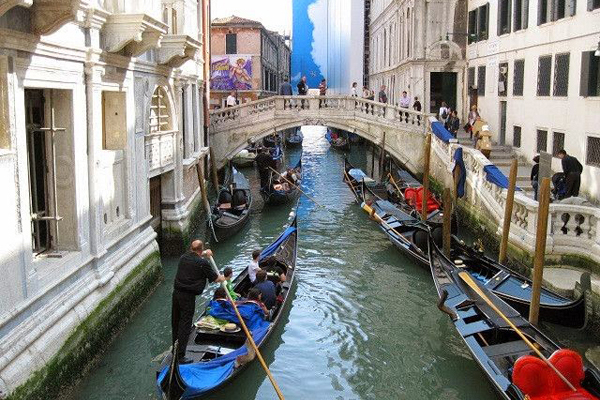 One of the attractions of the huge Venetian Casino and resort in Macau is a network of canals designed to resemble those in Venice. The canals have their own gondolas- and gondoliers- some of whom were real gondoliers in Venice. Due to the dismal economic situation in Italy, however, they have left Venice to earn a better living as “fake” gondliers on fake canals, entertaining droves of Chinese tourists.

At Macau’s Venetian hotel and entertainment complex, one can often see someone wearing traditional Italian dress poling a gondola along a canal, singing songs and playing the guitar to entertain visitors. Those gondoliers are organized into a team of 70-80 members and come from all over the world, with many from Venice. 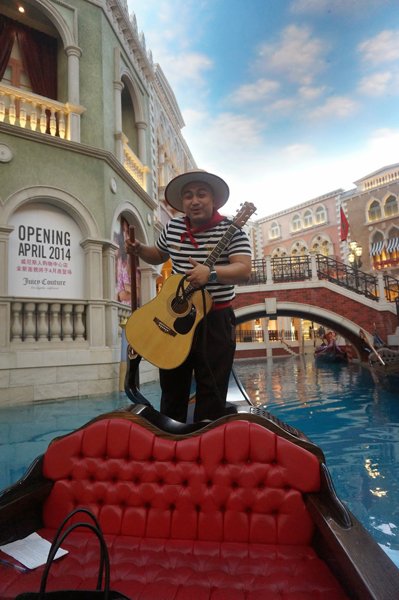 Renzo is one of them. His is a balding Italian with a dark-beard, a smiling round face, and large stomach. He worked as a gondolier in Venice before moving to Macau two years ago because the salary offered by the Venetian hotel was better than what he was making at home.

Renzo’s home town is known as the “city of water,” with 117 waterways, 118 islands, 401 bridges and its chief means of water transportation— the gondola. The boat, with a black body and famous Venetian decorations, has a slim bottom that allows it to move easily on the shallow canals.

The gondoliers’ profession goes back to the 11th century. Over 10,000 gondolas were once used in Venetian canals, but today only 500 are left, used mainly for tourists.

The decline in the number of gondoliers is a reflection of Europe’s economic crisis, and it led Renzo to look for work in Asia. At the Venetian hotel, he found a new opportunity in a fantasy recreation of his hometown’s most famous feature.

The canals at the Venetian hotel are named after three famous rivers — The Grand Canal, Marco Polo Canal and Sanluca Canal. The Sanluca Canal is the most romantic, because of the misty light and Venetian style shops. Creating indoor canals and reproducing the atmosphere and views of Venice make the Venetian one of the main tourist attractions in Macau.

For thousands of visitors, mostly from Mainland China, the exotic experience of a gondola trip, with the gondoliers singing traditional Italian songs, (has become a highlight of their trip. In Macau, it costs 118 Macau patacas ( USD$14.70) for adult tourists and 80 Macau patacas (USD$10) for children below 11. Each boat can carry up to 4 people. The whole ride takes about 20 minutes. 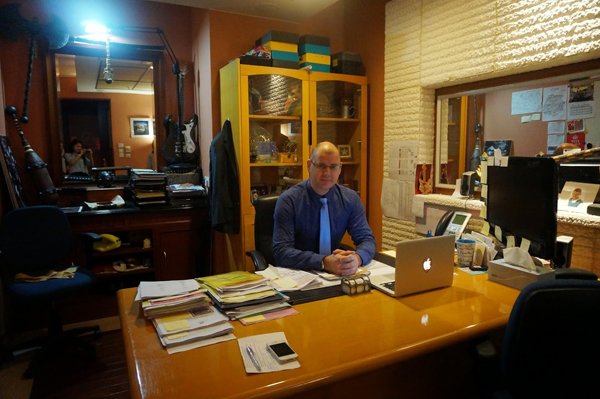 Loren Geeting, the Venetian’s senior entertainment manager, noted that most of the gondoliers are good at playing instruments, while others can sing traditional Italian folk songs. Renzo, even organized a band in Macau, playing guitar and drums on his day off.

Every Monday, they dress in traditional gondolier’s outfits and attend a brief meeting where they encourage each other and arrange activities. The morning briefing features a special gesture, where all the group members, including the leaders, clap their hands tightly together to show mutual support. 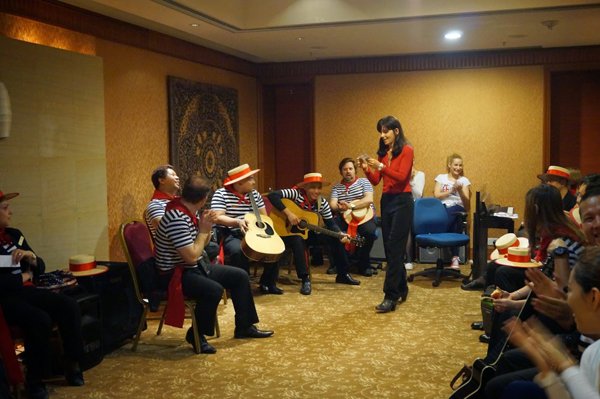 37-year old Ruggiero Veddola, a colleague of Renzo’s who also comes from Venice and has worked at the Venetian for 18 months, is another victim of Europe’s ailing economy. Before coming to Macau, he had worked elsewhere in Asia. The reason he left his family and hometown was for the job opportunities in the region. He feels fortunate that he found a job so similar to his old one in Venice. When asked about his family at home in Italy , Ruggiero just smiled and said he was happy in Macau because he likes changes and new challenges. For him, seeing his family or being back in his hometown is an unaffordable luxury.

In order to give an authentic sense of life in Venice, gondoliers at the Macau Venetian undergo a strict training process, even though most of them come from the Venice and made their living previously by rowing gondolas.

Ruggiero says the hardest part of his job at the Venetian was the training. Laughing loudly to hide his embarrassment, he said most of his colleagues took two days, while he had to spend one week.

He noted that dealing with from different backgrounds often made him tired. Many Chinese tourists cannot speak or understand English, so singing and learning Chinese songs are two major ways to overcome barriers to communication. Ruggiero complained about the difficulty of pronouncing Chinese characters, but it is his job to use this tool to close the distance between hearts.

With so many Chinese tourists, Renzo has had to learn two popular Chinese songs – “Fairy Tale” and “The Moon Represents my Heart.” He said it gives him great gratification when visitors sing with him and he can bring happiness and share the moment with them.

A Chinese tourist, Zhang Zhenlin from Shanghai, said he went to Venice several years ago, and the Venetian in Macau was a smaller view of Venice. However, he said the canals, bridges, and shops along the waterways were realistic. In addition, he said he could feel the happiness of gondoliers and enjoy wonderful songs for those who could not visit the real Venice. If you do not have opportunity to Venice, he said, the Venetian is a good choice.

Renzo said he was particularly moved when he took an elderly Japanese couple for a ride, and they sang with him as tears streamed down the old lady’s face. At the end of the trip, she said her time on the gondola would remain a sweet memory.

Two young Japanese girls, Ayumi and Sakura, just getting got off the boat, said the Gondola is versatile that gondoliers’ here can play instruments and singing songs. “ It was an amazing trip”, one of them said with smile.

Yuki Bao Yuqing and Sherry Xiao Yu are graduate students in the Department of Communications at the University of Macau.