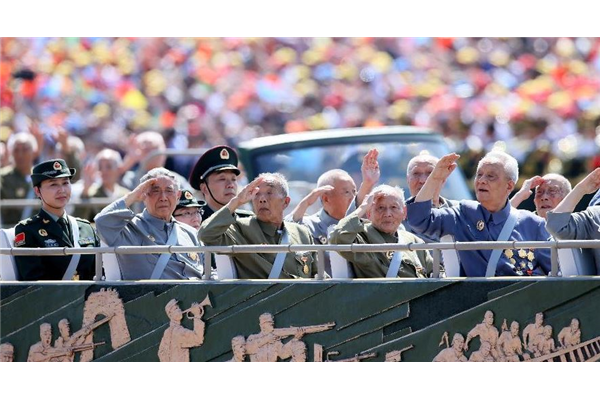 Following several months of preparation and much pointed discussion, China wowed audiences with a parade showing off its marching prowess and impressive military hardware on September 3. The parade, which commemorated the 70th anniversary of the end of World War II, has stirred up criticism over China’s on-going territorial disputes and anti-Japanese sentiment. Yet despite the display of tanks, drones, fighter jets, and ballistic missiles, President Xi Jinping’s remarks stressed that China values peace. President Xi announced plans to cut China’s military – the world’s largest – by 300,000 soldiers, reducing the troop strength to 2 million soldiers. The event stirred the pride of many Chinese but also caused many to reflect on China’s role in the global security landscape. Below are some comments collected from the conversation.

At the end of the day, this entire parade is just another case of Chinese nationalism tooting its own horn. It eclipsed the desperate numbers in the stocked market, it distracted the people from the horrible explosions, and it shifted the focus of the entire country to the uniformed goose-steps and the nationalism that strides on. Don’t believe it? Just go and count the number of red profile pictures on your WeChat and the number of people touched by the marching of the killing machine. –朝, as posted on the WeChat public account NIMA青年

Political liberty is a basic right as is freedom for everyone. It is okay that you have some other thoughts about our country. But it makes me angry that you still discuss the party and historical stuff on this special day. The Victory Day is not only for a party or a country, it is the victory for the whole world. Best wishes to China. –Yu Huan, Xi’an City, China, as posted on WeChat

Memorialize the war with flowers, not tanks. No war should be memorialized this way. –As posted on the University of Macau Students’ Union Facebook pagebanner

The Tiananmen Square is never short of flowers, it’s the people like those whose names were curved on the People’s Heroes Monument that are missing. –Jinlong Cao, Facebook comment in response

We’re memorializing the victory, not the war. –Ivan Xiaoxu Zhao, student at University of Macau, Facebook comment in response

Why don’t all the Wu Maos [“50 cent party,” those who are cheerleaders for the government] who have a problem here go back to the mainland and get brainwashed by the communist country? –Sheng Yu, student of Macau University of Science and Technology, Facebook comment in response

I am so impressed by the parade, meanwhile, I have critical opinion about the thing. Considering the purpose of the parade, China would like to show its military power. However, what is the role that China plays in the world and how important it is in reality is also a vital issue. I understand we are so proud of China and the parade, but to rethink these questions is another way to show our love for our country. –Ma Yingni, Canada, as posted on WeChat

So many grandparents, like mine, who fought in the War of Resistance against Japanese Aggression, cannot go to Beijing for the parade today due to poor health. And so many of them sacrificed their lives so they cannot see how great and prosperous China has become today. Let’s salute all of them! –Unnamed Weibo user as quoted in China Daily news article

China needs a 2 million man peacetime army to defend itself from whom? This parade was to showcase the CCP’s military strength & send a message of intimidation to China’s neighbors and internal dissidents. So much for the peaceful rise of China! –Comment by Wangchuk on a VOA news article

The Chinese people have expected a lot from this parade, thus it is sure that they will talk a lot about it, or even complain about the imperfections of the parade, for example, that the broadcast was not great, that some countries’ leaders did not come, or that the voice of the female soldiers were immature, and so on. But in general, this great parade has shown our national prestige and open mind. Especially, the theme of the parade that people will prevail has left a deep impression on people all over the world. –孔庆东, Professor of Chinese at Beijing University, Beijing, as posted on Weibo

The Chinese Communist Party didn’t defeat Japan; this is very painful to see. During those eight years, it was us Nationalists who were fighting – the Communists were not doing battle with the Japanese. They were trying to get Nationalist soldiers to defect to their side. –Major Tao Shin-jun, Taiwanese veteran of China’s fight against Japan in WWII, as quoted in The Los Angeles Times

This morning, I woke up so early and could not wait to see the parade broadcast that I didn’t even wash my face. Before the parade, I never felt that I loved my country so much. Only after going abroad did I realize that our country was so great!!! –Yang Qian, Chinese international student in Singapore, as posted on WeChat

Nothing like a military parade to change subject from China’s woes–but Chinese can’t say that. –Kenneth Roth, executive director from Human Rights Watch, as posted on Twitter

I am so moved by the parade, all of us should contribute for a better China just like these old soldiers fought for the victory of war. We should try our best to make the Chinese Dream come true. I wish our world can be peaceful forever and with no war anymore. The final victory is peace. –Liu Yadong, China, as posted on WeChat

Compiled by the US-China Today Team