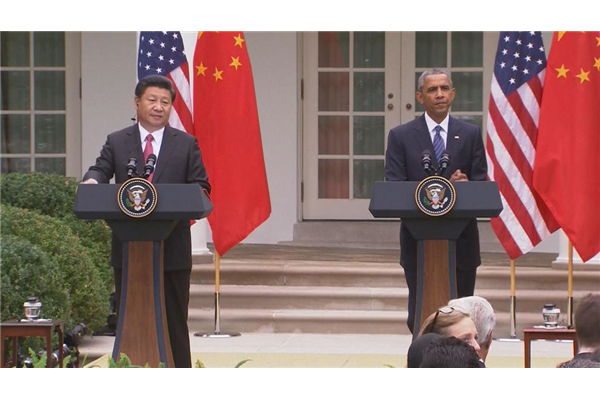 President Xi Jinping made his first state visit to the U.S. this week since becoming China’s top leader in 2012 — with a flurry of social media posts in response.

In his first state visit since becoming China’s top leader in 2012, Chinese President Xi Jinping visited the U.S. this week, with stops in Seattle, Washington, D.C., and New York. His U.S. visit began with two days of talks with American technology business leaders and then a state visit to the White House, complete with a 21-gun salute and state dinner. The trip will conclude in New York with Xi chairing a Global Leaders’ Meeting on General Equality and Women’s Empowerment and delivering a speech at the United Nations’ 70th anniversary session. For China, the event promotes Xi’s image abroad as well as permitting talks with U.S. President Barack Obama at a crucial time. However, many speculate that the visit will do little in bringing the U.S. and China into agreement on contentious issues, such as cyberespionage, disputes in the South China Sea, North Korea’s nuclear program, and tightened controls on foreign businesses operating in China. Here are some comments regarding Xi’s visit.

Xi talks about fighting cybercrime in Seattle speech, but U.S. companies are angrier than ever at China. –Edward Wong, Beijing Bureau Chief for The New York Times, as posted on Twitter The highlight of the visit is the trading and cooperation between China and the United States. Not only does the State of Washington have the highest export to China, but also Seattle has played an important role in US-China trading and it also contains many Chinese culture elements. Xi choosing to visit Seattle expresses his will to spend more time with American citizens hearing their voices. –Internet user Lengchuang-Aizaiyuzhong, as quoted in Xina article 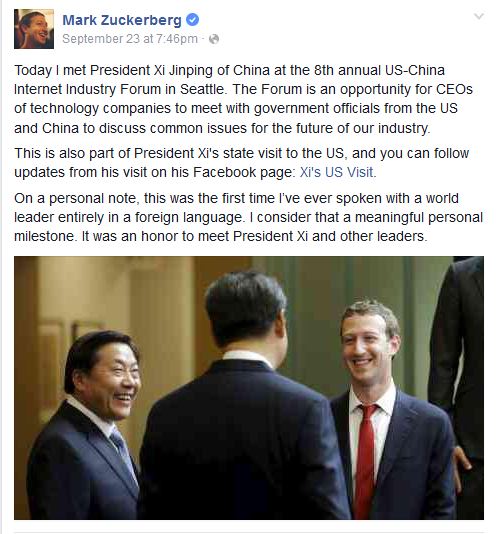 On a personal note, this was the first time I’ve ever spoken with a world leader entirely in a foreign language. I consider that a meaningful personal milestone. It was an honor to meet President Xi and other leaders. –Mark Zuckerberg, founder and CEO of Facebook, as posted on Facebook

The United States and China should reestablish their new relationship: partners in the field of economics, but rivals in the field of politics and military. –Comment by unnamed user on a VOA news article

I understand that China is the world’s largest consumer market, at least potentially. However sometimes so called friends and/or customers are not worth the effort. –Bruce Higgins, San Diego, as posted in The New York Times‘ comments section

I think for the most part, normal everyday Chinese aren’t going to be paying too much attention to this visit. You know, politics is largely a separate thing that many people don’t see as part of their own lives. But here’s the thing: You’ve got these products that American companies make. They do connect with that. You’ve got more and more people who are buying Apple products and other American products. I think that when we see the coverage on state media, and we’re going to see a lot of it in the coming days, I think that they will connect with that kind of thing.  –Rob Schmitz, Marketplace China Correspondent, as posted on Marketplace.org

This is the time to test out the wisdom of China. Chinese leaders need to let the United States feel its power, and also correct Americans’ misunderstandings of China. Therefore, President Xi has a big responsibility during this trip. –Sun Zhe, Director of US-China Relationship Department in Tsinghua University, as quoted in China Review article

Personally, I believe that the strategy that the United States has towards China doesn’t change in quality but in quantity, such as the increasing amount of negative comments or suspicions [towards China]. –Comment by Wang Jisi, the head of International Strategy Search Institution in Peking University, as quoted in The Paper

President Xi came to Seattle as his first stop of his U.S. visit. [As he left for New York today,] the passionate crowd biding him farewell had to fight against the anti-communist organizations for the limited space in the Seattle airport. Some TV channels incorrectly showed us [the students at the airport to send President Xi off] as the rebels to get more attention for their programs. –Comment by a WeChat user, Kyrie, a Chinese student in University of Washington

#XiJinping knows where real power lies in US. That’s why he went to Seattle first, not DC. –David Pilling, FT Asia Editor, as posted on Twitter

President Xi’s wife Ms. Peng has a terrific taste for design, especially for her scarfs. Moreover, what I admire the most is that she chooses Chinese original brands for all her outfits, and that represents her support to the authentic Chinese brands. –Comment by Tengxun user, ZZcainv

When I was driving from Seattle, I was held up for an hour because they blocked off the I-5 for this guy to have the whole highway to himself. Dislike  –Gilbert Sylvain, Burnaby, British Columbia, as posted on Facebook

Since 2007, I have continuously attended the U.S.-China Internet forum for eight years. However, this year the forum has the largest participants, the grandest executives team and the highest quality. At the same time, President Xi serves as the leader of the National Internet Safety and the leader of Technology and Culture Promotion. His willingness to meet the tech executives in person shows that he is highly concerned about the Internet industry and pays close attention to it. –Comment by the CEO of Sina, Cao Guowei, as quoted in Sina article

His face is a little bit cute. –Benedikt, Austria, as said in a video posted by China’s People’s Daily