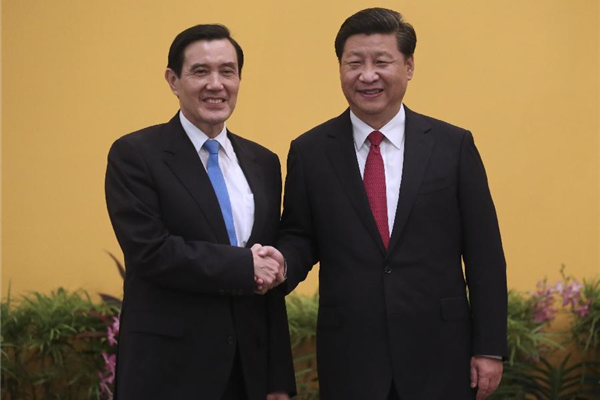 China and Taiwan’s top leaders met in Singapore last week in a historic summit. The event has catalyzed an impassioned response.

Chinese President Xi Jinping and Taiwanese President Ma Ying-jeou convened Nov. 7 for the first time since the 1949 Chinese civil war. The unexpected summit, announced just days before, brought the two leaders together in Singapore. The meeting commenced with an eighty-second long handshake against a noticeably neutral yellow background. “Nothing can separate us,” said Xi during the press conference. “We are one family whose blood is thicker than water.” The joint remarks preceded a private meeting and a casual dinner, for which the two leaders reportedly split the bill. Since Ma assumed the presidency in 2008, Taipei and Beijing have made strides to achieve better relations. Despite the warming relations, mainland China still views Taiwan as a rogue state. Meanwhile, many Taiwanese citizens fear closer integration with mainland China — pro-independence protesters gathered at the parliament building in belief that the meeting was a precursor to reunification. The meeting is largely seen as an attempt to reshape the result of the upcoming Taiwanese election. However, it is unlikely that next year’s elections will favor the Kuomintang (KMT), the party Beijing has outwardly supported. Below is a collection of opinions on the event from social media surrounding the meeting.

He [Ma] wants to salvage his own legacy. He only has seven months to go, his standing in the polls is way down [and] he somehow wants to be seen in history as the person who made the breakthrough with China. –Van der Wees, former Dutch Diplomat, as quoted in The Guardian

We had expected that President Ma would speak (to Xi) about Taiwan’s democracy, Taiwan’s freedom, the existence of the Republic of China and more importantly, the freedom of choice that the Taiwanese people have. However, he did not mention any of these issues. –Tsai Ing Wen (蔡英文), Taiwan Democratic Progressive Party (DPP) presidential candidate, as quoted in The China Post

Each leader hopes to seal his legacy as one who helped bring decades of division and mistrust to a mutually acceptable end, but the meeting is more about the symbolism of coming together than about substance. Both sides have said no agreements will be signed or joint statements issued. –Christopher Bodeen, Beijing correspondent for the Associated Press, as quoted in U.S. News & World Report

But the men wanted no other news. Even the backdrop – a plain yellow wall – was selected to be neutral, neither the red of China nor the blue of Ma’s Kuomintang party. They made sure the handshake itself was the news. And it was. –Tim Sullivan, Associated Press journalist, as stated in an Associated Press article

For many, a meeting would be truly historic if it involved the person who is likely to be the next president of Taiwan and who will have enough time and strong enough a mandate to affect the relationship with Beijing. –J. Michael Cole, as posted on Thinking Taiwan blog

The Communist Party mouthpiece People’s Daily newspaper covered its front page above the fold with three articles praising “friendship” and “the future of peace” and musing about how the “historic handshake spans 66 years of space and time.” –Chuin-Wei Yap, as quoted in The Wall Street Journal

[The Xi-Ma meeting is] a historical meeting that can change Ma’s historical status to even higher than Lian Zhan. Otherwise Ma, who is in declining tendency, might end up similarly to Chen Shuibian. Will this change the outcome of the 2016 presidential election? Hard to tell. But it surely will sow seeds to cross-strait relations. It is about economic and trade cooperation, and about war and peace. –石述思, a famous commentator. as posted on Twitter

An earlier meeting between Mr. Xi and Mr. Ma might have helped to build broader Taiwanese trust in the Communist party’s intentions, but at this late stage it looks more like an attempt to influence the election — and one that could easily backfire if voters feel they are being manipulated. –Mure Dickie, Financial Times Scotland Correspondent, as stated in a Financial Times opinion article

To me, it seems that Taiwan is likely to find itself in an increasingly unsustainable position. If economic ties with PRC become deep enough (perhaps they already are), PRC seems very likely to try to use this leverage to bring Taiwan’s stated stance on issues such as territorial claims closer to its own. –Erikawonka, as quoted in the comments section of a Financial Times article

Xi-Ma Meeting is absolutely a good thing. But it is likely to yield the the same outcome as of the North and South Korea Summit. Since President Kim Dae Jong historically visited North Korea, South Korea experienced different parties and presidents, but North Korea remained the one party system. The North-South relations remained the same. –乔木, as posted on Sina Weibo

China says that it cares for Taiwan. Yet it rejects the island’s desire to create and control its own destiny. If Xi wants to win Taiwan, then he needs to win over Taiwan’s 23 million people. One handshake, no matter how long, won’t do. –Zoher Abdoolcarim, Time journalist, as stated in Time article

The highly symbolic value of the historic meeting will force Taiwanese society and politicians to make the China ‘issue’ more of an issue in the elections, which so far have focused largely on domestic issues. –Michael Cole, Taipei-based regional analyst at University of Nottingham’s China Policy Institute, as quoted in NBC article

The warning is not intended to change the election outcome, but to influence the landscape of public opinion post-election, so as to provide a stronger incentive for Tsai to avoid disrupting the cross-strait status quo. This is a message intended to narrow the DPP’s maneuvering space, in the sense that they would not dare to pull another Chen Shui-bian set of initiatives. –Andrew Nathan, professor of political science at Columbia University, as quoted in Japan Times article