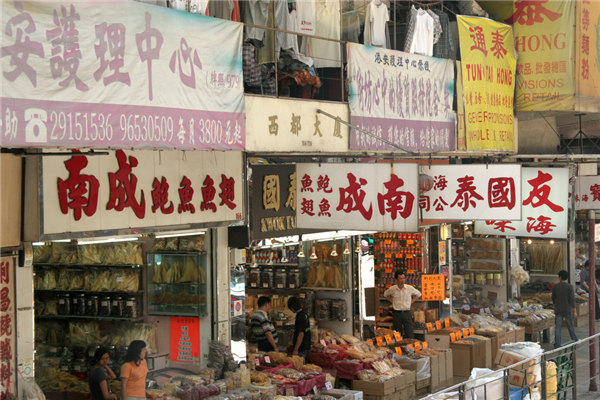 The State of Cantonese Language in Hong Kong

While media outlets have expounded the rising prevalence of Mandarin in Hong Kong and falling levels of Cantonese, US-China Today’s research and interviews indicate that the rise of Mandarin is exaggerated.

Ma’s case is indicative of a growing tide of concern among Hong Kong residents that fear China’s growing influence has encroached on Cantonese language and culture. Some journalists and academics have speculated that the rise of Mandarin in Hong Kong is at the expense of Cantonese, its native tongue, manifesting through increased levels of Mandarin instruction in school and usage in white-collar occupations.

However, recent interviews with experts and Hong Kong natives indicate that this overstates the decline in Cantonese use. Ma herself argues that Cantonese is still influential and relevant. “Cantonese is the preferred mode of communication. It’s our mother tongue and recent trends of protecting local culture only prompted us to use it more.”

While media outlets like The Atlantic, Los Angeles Times and South China Morning Post have published articles expounding the rising prevalence of Mandarin in Hong Kong and falling levels of Cantonese, US-China Today’s research and interviews indicate that the rise of Mandarin is exaggerated.

Cantonese Stable, If Not Growing 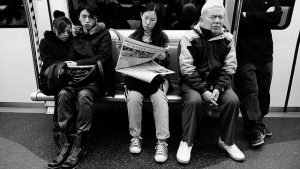 Over the last decade, articles in various publications have argued that Cantonese is on the way out in favor or Mandarin. In a sensational 2015 South China Morning Postarticle, University of Hong Kong linguistics professor Stephen Matthews indicates, “Cantonese is an endangered language” and that “it may well be on its way out” due to the rise of Mandarin. A similar 2013 article in The Atlantic refers to Cantonese, among other Chinese dialects, as “dying,” while a 2006 Los Angeles Times headline says that “Cantonese is losing its voice.”

Yet some prominent academics in the field of linguistics have come to a different conclusion. Chao Fen Sun, a professor of East Asian Languages and Cultures at Stanford University argues, “Cantonese is definitely far from dying out in Hong Kong. Just go to Hong Kong and turn on a T.V. Everything is in Cantonese with a little bit of English.”

Professor Alan C. L. Yu, a linguistics professor at the University of Chicago, says that “in terms of people speaking at home and on the streets and local shopping, people are still very much using Cantonese. I think that it will be hard-pressed to find someone whose children are actually speaking Mandarin at home where the parents are Cantonese speaking.”

From 1841 to 1997, Hong Kong was a British colony, adhering to British law and influenced by British culture. This included English instruction in schools until the mid-1990s. However, in 1995, Hong Kong started “mother tongue” education, or traditional Cantonese language education. Even before the agreement in 1984 to return HK to Chinese control, there were significant efforts to promote Chinese use. This included the Chinese University 中文大学 established in 1963. Even there, however, English is the most commonly utilized language. Today, about half of the primary schools and high schools in Hong Kong still use English as the language of instruction, while the other half use Cantonese.

“It used to be the case there was one or two Putonghua [Mandarin] Chinese [classes] in all curriculum across the board in schools,” says Dr. Dingxu Shi, professor of Chinese linguistics at the Hong Kong Polytechnic University. “Now they are trying to using Putonghua to teach Chinese. If you think the increase of Putonghua teaching of hours’ proportion is something new, it is still tiny compared to everything else. Half use English, half use Cantonese.”

Maryse Chan, another sophomore student at Heep Yunn High School, speaks to the competitive, exam-orientated culture of Hong Kong schools, perhaps reducing the prevalence of Mandarin instruction in favor of higher scores for Cantonese language testing. She does recognize the steady push for Mandarin in lower grades, stating that higher-performing students are assigned to Mandarin classes.

“As a senior form student [sophomore equivalent in the U.S.], I no longer have to study Mandarin because…our public exam, it is said that it is easier to score higher marks in Cantonese for the speaking component. Therefore, as Mandarin has nothing to do with our public exams, we no longer have Mandarin lessons because it would just distract us from scoring good grades.” 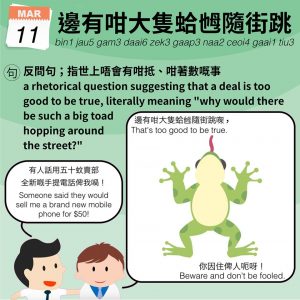 An image from Lau’s Cantonese dictionary. Courtesy of Lau Chaak-Ming

In 2014, Lau Chaak-Ming, a lecturer at the University of Hong Kong, started a project to preserve the Cantonese language when he realized there was no Cantonese-to-Cantonese language dictionary. Instead, only dictionaries that translated Cantonese into other languages existed. Today, more than 120 volunteers are involved in the project with 30,000 basic words are already recorded.

While his work is preservationist at its core, the dictionary also alludes to the struggle of Hong Kong natives in protecting their culture and language.

“I think the push to unify the nation through Mandarin is pervasive and that is why we are fighting against it,” says Lau. “Even Hong Kong is a separate unit in terms of the PRC. We are not independent yet but we are separated. But what are you seeing is that educators in Hong Kong and the government are trying to push Mandarin into the curriculum.”

He also speaks to the importance of preserving the language in relation to works of the stage and silver screen that have been performed in Cantonese, contributing to the language’s cultural importance.

In addition to acts of preservation in response to the increase in Mandarin, there has also been a backlash. “Nothing that significant happened amongst schools, but there were heated protests regarding the issue due to its relation with the ‘One Country, Two Systems’ [rule] in Hong Kong,” says Chan. “Hong Kong citizens take pride in the language because it is the fundamental difference between the two regions, fulfilling the One Country, Two Systems, which is a core value that Hong Kong citizens strive to uphold.”

What is the future for Cantonese in Hong Kong?

While some individuals predict the extinction of Cantonese is near, academic experts and local residents widely disagree. The prevalence of Cantonese may not be the same as it was 50 years ago, but the Cantonese culture and the use of Cantonese amongst residents remains active and proactive. The current push-back against mainland China’s influence through the Cantonese-to-Cantonese dictionary and everyday use in local conservation speaks to the consistent and growing opposition.

Shi has similar conclusions. “Cantonese is still the number one dialect; it is the mother tongue of about 95% of the people… [These ideas that Cantonese is on the decline] are like Angelenos saying that by promoting Spanish, the importance of English has gone down.”