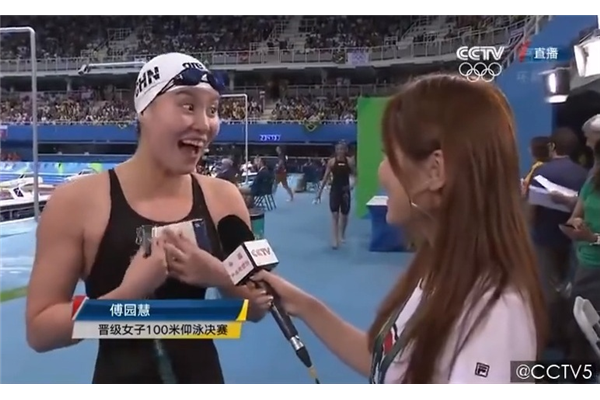 Opinion: Why China May Have Actually Won the Olympics

Although China traditionally touts its medal count as a sign of national strength, this year, the genuine attitudes and interactions of its athletes took the gold.

When Beijing received the Olympic torch from Athens in the 2004 closing ceremony, China’s cultural display was spectacular, yet devoid of any recognizable contemporary icons that host countries usually have. Compare this with the closing ceremony at the 2008 Beijing Olympics in which British football star David Beckham made headlines simply because he appeared. At the 2012 London Olympics closing ceremony, Brazilian supermodel Gisele Bündchen graced the world stage to represent her country for Rio’s turn to host. Then at the end of this year’s Olympic games in Rio, spectators cheered when they saw Japanese Prime Minister Shinzo Abe, dressed as Super Mario, emerge on top of an iconic green tunnel from Nintendo’s Mario game. Most countries who have the wealth to host the Olympics are generally recognizable and well-liked—yet China’s modern-day image still remains unclear.

Certainly, China is undeniably growing in economic power, which its rising rankings in each Olympic medal count chart explicitly show. Since 1999, the United States Olympic Committee invests an average of $4.4 million per medal. The United Kingdom, who topped China in this year’s medal count, invested around $6.7 million per medal in Rio alone. China does not release information on Olympic athlete funding. By the 2008 Beijing games, China became infamous for its gold medal mentality and topped the medal count chart above the United States, highlighting its dramatic and historic rise in the late 20th century. China also showed its economic might through gold because the investment behind finding, training and funding world-class athletes is incredibly costly.

However, China’s problem today lies in its lack of substantial soft power, or the ability to attract and influence rather than coercing or using force as a means of persuasion. After Rio, and a reduced medal count, some Chinese citizens worried that China even lost some of its soft power, because it did not show as strong of an image to the world. Its athletes won an unexpectedly low number of golds – 26 – which is the lowest ever in two decades, when it won 16 at the 1996 Atlanta games.

Yet Rio was a different story as China’s athletes showed their sincere personalities that reflected parts of their own culture. During the games, Chinese swimmer Fu Yuanhui had the audacity to admit she had menstrual pain on television and the humility to feel proud that she performed her best. Thus the athletes significantly enhanced China’s soft power influence in a way unplanned by its government. They also encouraged the Chinese people to care more about the athletes themselves and less about the color of metal around their necks.

If China wants to enhance its power and influence, it needs to focus on developing an image that promotes more than just its economic strength. A 2014 Pew Research Center study showed that global perceptions of China today are generally favorable – especially for developing countries in Southeast Asia, Latin America and Africa. However, the study suggests that much of that positive image depends on China’s growing economy and not its cultural exports. Further, the US views China as 55% unfavorable – perhaps owing to the antagonistic and competitive relationship between the two nations. With more soft power, China could rely less heavily on its economy for building influence and more on its culture and values. If we were to focus on just soft power, the US would win the gold medal, and China would not even place.

China somewhat understands this issue. For example, the country tries to enhance its image abroad by contributing to development projects in Africa and Latin America. In a 2015 Pew Research study, 48% of the countries surveyed believed China will eventually or has already replaced the US as the superpower, as opposed to 35% who did not. Yet the Chinese government’s attempts at building soft power are not always effective – and sometimes even strange. Their latest effort was a confusing English-language video about President Xi’s 13th 5-year plan, filled with seemingly random animations, disorienting colors, and no explanations on what this plan actually is. The song was catchy, though.

During Rio, China hit a soft power goldmine. Fu became a sensation overnight, and was labeled across global headlines as a taboo breaker. This led to people around the world seeing her as a bold and honest woman, not just another Chinese swimmer. Then Chinese diver Qin Kai proposed to fellow diver and girlfriend of six years He Zi at her medal ceremony. Qin bent down on his knee and presented He with a rose encased in glass, and every camera caught He’s initial shock and the tears that followed. Some media outlets were not completely positive and stated that it was a form of male dominance and took attention away from her silver medal ceremony. Others believed it was too publicized, and the attention may have pressured He during this traditionally private and intimate moment. Yet while these criticisms were valid, they questioned greater societal issues afflicting our world today. Nevertheless, the proposal bolstered China’s image and became one of Rio’s most memorable moments.

Towards the end of the games, China had one final victory from its women’s volleyball team, who won gold against Serbia. Even though nobody believed the team could win a medal, especially after its losses throughout the games, the underdog team surged in the final rounds. The surprise gold medal victory and its charismatic players earned them the title “the golden girls.” Even Hong Kong, which competes separately in the Olympics, adored and welcomed the team.

The press saw them as diverse characters whose stories needed to be told. People across the world saw them as personalities they wanted to know and relate to. Even Chinese swimmer Sun Yang, who was caught in a dispute with Australian swimmer Mack Horton, showed his own bold attitude – and that wasn’t necessarily bad. At the very least, the public got to know contemporary China better.

Since its peak in 2008, China’s gold medal obsession has faded. Fu Yuanhui showed the country how to enjoy the games. Before she even swam her medley relay, she received public attention because she was excited and astonished by her personal performance in the 100-meter backstroke event. She was honest and genuine, which is why the Chinese truly adored her. While Western media focused on her comment on menstruation, Fu looked like she is just having fun. This was new for Chinese viewers, who saw Chinese athletes crying at silver medals in 2012. Look up this Internet icon’s photos, and results will show her varied, ecstatic, and entertaining facial expressions that undeniably showcase the true Olympic spirit of loving the games for the game’s sake.

However, the most unexpected example of China’s evolving attitude came from a Table Tennis match, when Chinese fans cheered on Japanese athlete Ai Fukuhara as she played against defending Chinese Table Tennis champion Li Xiaoxia in the women’s semifinal singles match. Despite China’s blurred relations with Japan, Ai was adored by Chinese fans for her fluent Mandarin and doll-like looks. Although Ai ultimately lost, Chinese fans still supported her, and “Don’t Cry Ai-chan” became a trending topic on Weibo. The fact that Ai remained in the fans’ focus showed that China was more focused on enjoying the games rather than chasing gold medals.

This shift in focus will be slow, but the voices of Chinese people who want to look beyond winning gold medals are becoming more prominent on social media platforms like Weibo. While discussing the Rio Olympics during interview with the South China Morning Post, the coach of the Chinese women’s volleyball team and former sports legend Lang Ping said, “I am very proud of myself because I am Chinese.” This pride that Lang felt was not drawn from the color gold. It was drawn from within herself. These athletes show that contemporary China does not look like the precise, military-esque thousand drummers at the 2008 Beijing opening ceremony, but instead looks like people who can show authentic emotions of fearlessness, love, pride, and self-assertion. Rio brought out this genuineness of Chinese athletes to the public, and this genuineness showed that there is something culturally great – something deeply Chinese – growing in China that the world can appreciate.