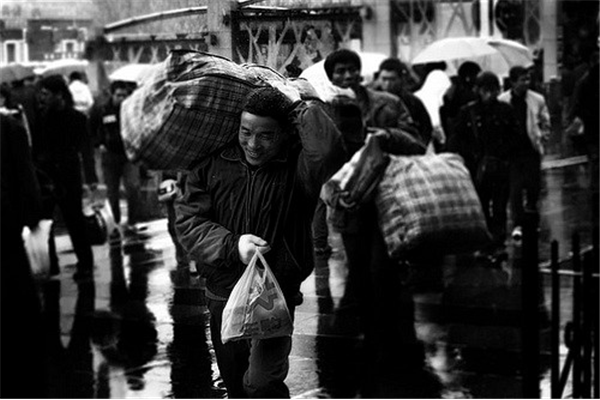 As migrant work becomes increasingly prevalent in China, a social phenomenon known as temporal marriages has emerged to meet needs of the heart and flesh.

As migrant work becomes increasingly prevalent in China, a social phenomenon known as temporal marriages has emerged to meet needs of the heart and flesh. Migrant workers flood into cities in hopes of building a better life for their families back home, forcing spouses apart for long periods of time. In seeking comfort and a remedy for loneliness, migrant workers venture into temporal relationships with other migrant workers. Often these relationships emerge and grow through electronic means — texting and social media — before meetings happen in real time. Those engaged in temporal marriages must grapple with feelings near and far, their legal partners at home and assumed relationships in the city. US-China Today has gathered voices from experts and interview sources to illustrate different aspects and perspectives on temporal marriages.

“I think migrant workers certainly have a lot of constraints on them. They go out working, if they are married, they aren’t necessarily bringing their entire families with them. So the separation of couples who are migrant workers but one spouse may stay in the village and the other one might go out or they both go out working but in different provinces. That stress is on any relationship.” -Cara Wallis, Texas A&M

“‘Temporary marriage’ has never been as epidemic as it is nowadays. In western countries, sexual liberation might mean mentally. But some people in China may take it as physical liberation [from rural areas]. Moreover, technologies such as smart phones, internet and mobile apps also make it easier to start physical relationships.” -Wang Ziqun, author of Temporary Couple

“‘At first, I felt it was a hard decision [to enter a temporary relationship]. I have children and a husband back home, but [my temporary partner] has shown me so much care and affection,’ said one female migrant worker. However, she thought it over and finally agreed after considering the fact that her husband had also had an extramarital affair before. In addition, she talked to many of her women friends who were in similar situations and all told her that they were much happier now.” -As reported in Women of China

“Personally I cannot stand affairs in marriage, but I have to admit that life is hard for migrant workers. To some extent, temporal marriages reduce the chances that male migrant workers might find random single women to relieve their sexual desire. I would like to say it is a tragedy of this time.”
–User Zjj, 嘟嘟熊 via Tianya

“There is something wrong with the society! Some prefer sticking with their original spouses while others prefer finding new partners. It is not just migrant workers. People in modern cities, government officials and rich peoples have that type of relationships as well. Why are we only criticizing migrant workers for having affairs?”
–User 小妖已经过时 via Tianya