The word “wedding” usually elicits the image of a classic white gown on the beautiful bride, an image entrenched in minds around the world owing to movies, books and widespread Western influence. However, on the other side of the globe, Chinese traditional wear is also growing in popularity, marking the re-emergence of colors like red and gold in the field that at least for the past few decades had been saturated with Western-centric white. 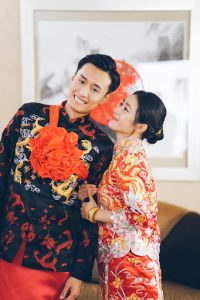 The tradition of Long Feng Gua (龍鳳褂), a bridal garment steeped in years of history, first stemmed from 18th century Qing Dynasty weddings. Mothers would begin to sew and stitch a Long Feng Gua shortly after giving birth to their daughters. The practice is greatly time-consuming, but because girls married earlier, the common practice of beginning these handicrafts early was a logistical necessity. This gift was usually part of a bride’s dowry from her family when getting married. Its popularity was preserved mainly in Hong Kong, China and Macau, where it is common tradition for women to wear these Chinese-styled garments specifically made for their weddings.

Long Feng Gua are visually conservative. However, compared to other outfits like the Qipao (旗袍) or the Xiu He Fu (繡和服), the Long Feng Gua is much more elaborate and extravagant since it is made for weddings, whereas the Qipao may be more suitable for parties and social events. Compared to Western wear the Long Feng Gua is looser, but in its modern and less conservative form, it is also more tailored to reveal the shape and figure of its wearer. However, there are still limitations due to the fabrics used that make them very structured and form-fitting.

The Long Feng Gua lends itself to more intricate, elaborate and detailed designs compared to other types of wedding wear. Not only do craftsmen and designers ensure the cut of the dress is deemed flattering on the bride, the gown is handmade and the embroidery sewn by hand. The process can take anywhere between three to twelve months. This makes each piece a unique but also time-consuming endeavor, which is why as both as a customary and commercialized product today, it is an expensive tradition to keep up. Though alternatives such as mass-produced Long Feng Gua’s are now available, differences in quality are significant and sometimes visible to the naked eye. Hsu-Lun Lee, the executive director of Royal Gown Ltd., a company located in Taiwan that specializes in Long Feng Guas, says “there may be other companies who also sell Long Feng Gua’s but their designs and quality is definitely different from ours.”

There are different types of Long Feng Gua’s based on the amount of embroidery crafted on the dress. The first two types (as listed below) are more popular and traditional. In the past, as Long Feng Gua’s were hand-sewn by mothers, the variations with less embroidery were easier for people to sew and create.

However, as the Long Feng Gua became more commercialized, businessmen also created more types and variations, made possible by skilled industry craftsmen. The popularity of these edited forms are built upon the belief that the more embroidery on the dress and the shinier it is, the “higher” the woman will marry. 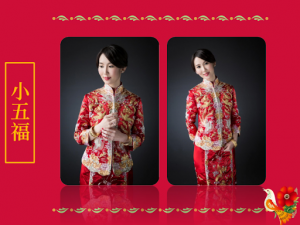 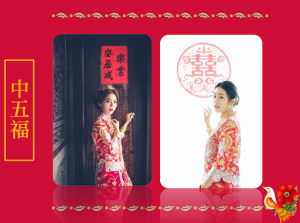 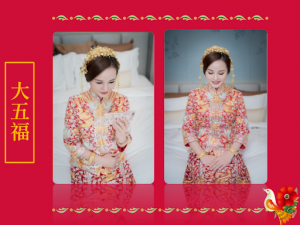 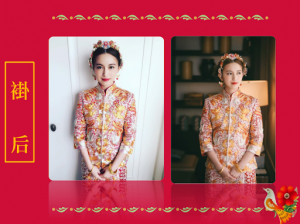 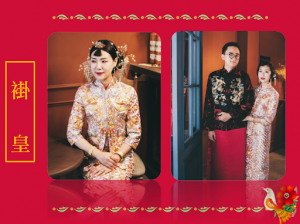 According to Ms. Lee, offering both the classic variants of the wear and customized alternatives at her company, Royal Gowns is essential.

“We started [doing] this because we first realized these clothing and wear are very beautiful, but most Taiwanese people didn’t wear it or have access to it,” Lee says. “This was about five years ago when the business started. However, the Long Feng Gua has been very famous and popular in Hong Kong for hundreds of years. In Taiwan, we used to only have the Qipao which is not as glamorous as the Long Feng Gua.”

Lee explains that Taiwanese brides tend to prefer form-fitting wear, because many of the clients she has encountered care most about how traditional outfits look on the body. Long Feng Gua’s, with their elaborate and at times bulky embroidery, tend to be lighter in color and so when worn may not be as slimming. This contributes to the popularity of Long Feng Gua variants with less embroidery.

Compared to other traditional wear like the Qipao, the Long Feng Gua has also surpassed that in popularity due to the fact that the Qipao has a “lot of requirements for the woman’s body because it is much more figure hugging so many may opt for the Long Feng Gua instead,” Lee says.

According to Lee, the company still produces all Long Feng Gua’s in Hong Kong, which has the best craftsmanship.

“What makes us different is that we are the earliest and oldest Long Feng Gua company in Taiwan,” Lee says. “We started this business at a very good time, when there were a lot of cross-strait marriages including that of Angelababy, Huang Xiao Ming and they all wore such clothing for their weddings. As such, this became a lot more popular. Within Taiwan, we also pushed and promoted the wear of Long Feng Gua’s.”

As such, Royal Gown Ltd. has played a part in the Taiwanese wedding apparel scene in marketing the popularity of the Long Feng Gua and providing for the rising demand of these apparel over the last few years.

Royal Gown has served many clients whose marriages are a union between East and West. If one partner is Western, couples tend to like gowns with more red overall, because it is commonly associated with Eastern culture and stands out in ceremonies.

Lee explains she wants to provide the Taiwanese community access to traditional apparel. Ultimately, she is driven by the goal of cultural preservation.

“For the most part, many are interested in trying these Chinese traditional dress because they see it growing in popularity in the media and on celebrities,” Lee says. “However, it may not be necessarily due to a sense of pride in culture. But what makes me very happy though is that for many cross cultural couples, many will think about how they can represent their culture in their weddings … I cannot represent the whole of Taiwan on how they feel, but for many in Taiwan, in their marriage and ceremonial parts of the big day, this would be most fitting to many who want to incorporate the use of traditional wear with the traditional practices and rituals on their special day.” 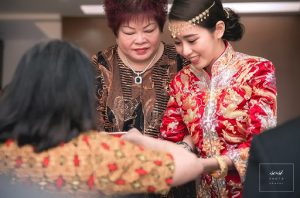 Newlyweds Grace and XJ Quek from Singapore also shared, “Most of the elders commented that we looked really good in the Long Feng Gua’s, comparatively, not as many comments were made about our wedding suits and gowns.” The revival of this cultural trend and appreciation of traditionalism still exists to this day and the apparel is further reinforced by its striking and unique characteristics, differing Eastern designs from Western customary wear.

Based in Taiwan, manager of Catherine Wedding Photography (凱瑟琳婚紗) Lisa Tang explains that many couples are not only interested in having the show of these traditional wedding apparel on their big day, but also in their pre-wedding photoshoots to keep as a memory for life.

Based on their younger clientele’s increasing interest in the traditionally-styled wedding dress, the photo studio has imported more handmade traditional gowns to provide a variety of choices to meet the needs of those who want to incorporate traditional Chinese culture into their photos.

Tang thinks the rising popularity of these gowns, especially in Taiwan, can be attributed to a similar “popularity increase of China’s imperial-style dramas, causing many people want to experience those parts of Chinese history. In a way, traditional Chinese wedding wear allows them to model after the characters in the drama. Additionally, as more celebrities are doing this for their weddings, the media has put a lot more focus on these traditional practices.” 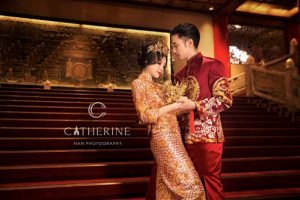 According to Tang, Taiwan is heavily influenced by the West, and many will choose to wear Western gowns. However in the last few decades, because of increased exposure and relations with China through business, there have been increasing rates of cross-strait marriages (between people from Taiwan and China).

The influence of the media, television dramas and celebrities, has re-ignited a spark surrounding Chinese traditional wedding wear.

The once traditional and conservative use of traditional Chinese wedding wear has transformed over the years to become a fashion statement and a symbol of cultural preservation and pride. Media has modernized a traditional practice into a trendy one, and with that comes the fight for businesses like Lee’s to continue to seek craftsmen who can produce apparel of such quality.

“In the next 30 years or so, I expect that this tradition will slowly die out as old skilled craftsmen retire and younger people are not willing to take the reigns and secure this craft,” Lee says. “As a business owner, I can only do so much to preserve these pieces, so year to year I stock a few more extra sets based on how much my company can afford to keep these pieces. Hopefully, there are a few more to go around when this craft eventually fades.”

While the popularity of traditional wear such as Long Feng Gua continues to rise, it drives mass production of these apparel, but the true form and technique of crafting and making these gowns are fading. Despite the young demographic that drives these popular trends, the cultural significance of these trends lies in its rich history, meaning and craftsmanship.