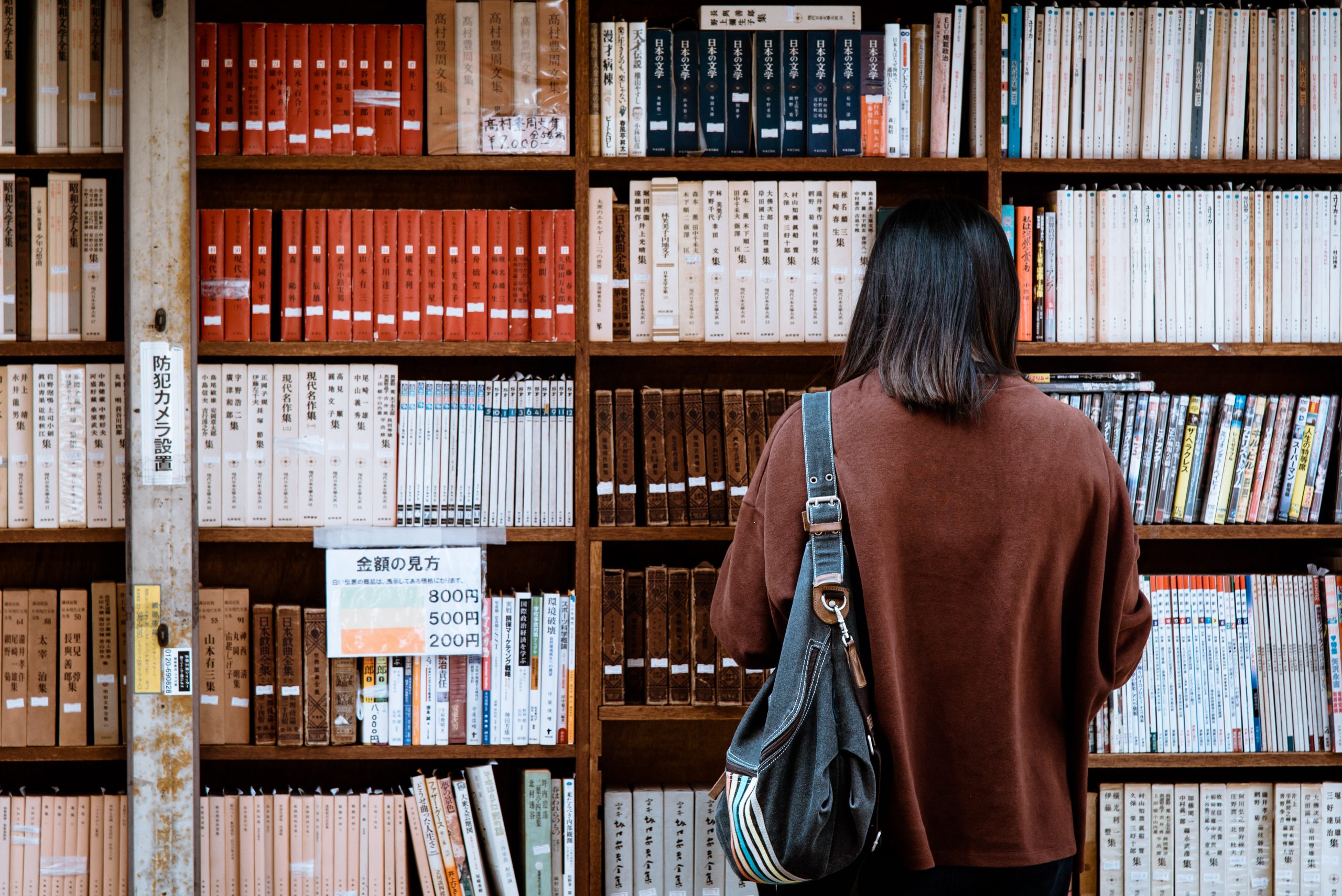 Global citizens in a global pandemic: Chinese international students in 2020

“I knew it,” said Ric Xian, a University of Southern California student from Beijing, China. “I just thought with everything we had gone through so far, we are not going to lose our [student] visa in 2020.”

On the fourth day of his 14-day quarantine in Qingdao, China, Xian saw the breaking news headline on a phone alert and went back to sleep without even opening the link. Things were changing fast in 2020, and another change in his student visa status could not surprise Xian anymore. In Xian’s eyes, passports had become the most useless thing in 2020 since the COVID-19 pandemic outbreak began.

Petitions aimed to convince the Immigration and Customs Enforcement to reverse its decision gained steam on social media. The list of 200+ universities that are supporting MIT and Harvard in legal action against the visa policy ballooned in a matter of days. Students with U.S. citizenship posted their schedules and voluntarily exchanged their in-person or hybrid courses with international students in need. For international students who needed an in-person class to maintain visa status, USC provided a one unit in-person class at no additional cost, and other universities had similar plans.

On July 19, Xian is going to celebrate his 20th birthday alone in his quarantine room. Thinking of what he and other Chinese international students have endured in the past few months, he thinks a quarantine-style isolation birthday is not all that bad.

Tony Wang lay on the queen bed in his hotel room, staring at the bare ceiling and wondering what lunch would be. Wang had been quarantined in the same room for three days. His luggage was still at the airport, and without his belongings, he became closely acquainted with his hotel room’s television.

As a third-year music student at the University of Chicago, Wang finished his online winter quarter in late March and flew home a week later. Since the flight was scheduled for a week after his dorm closed its doors to students, and he had already placed his belongings in storage, Wang slept on a bare bed for his last week in the U.S.

Wang was not alone in this nationwide campus evacuation. With the COVID-19 outbreak and following stay-at-home order, campuses became empty and international students scrambled to find out when and how to get home abroad. Many Chinese international students chose to go back to China immediately after universities announced remote learning plans. Some were lucky enough to secure a seat on a flight, while those less fortunate were forced to stay in the States.

On the plane, wearing a N95 mask, a pair of glasses and some durable clothes, Wang felt “unprofessional” among passengers who had donned goggles and protective suits.

“[The passengers were] armed to the teeth [with protective clothing],” Wang said, “but I didn’t do that much preparation.”

“As soon as I received an email [from UC Berkeley], I talked to my parents, and we decided that [I was] going to stay here until the end of the semester because I’m staying in a safe dorm and keeping social distance,” said Alejandro He, a rising sophomore studying data science at U.C. Berkeley. “[Remaining on campus could] also give [the Chinese government] less pressure to do their job and stop the disease from spreading.”

Ric Xian, at USC, also chose to stay on campus until the semester ended, despite his parents’ desire for him to return home.

“I don’t really get along with my family,” Xian said. “Honestly, I kind of enjoy being here by myself.”

Most regular flights were canceled, and the declining supply in tickets led prices to skyrocket overnight. An economy class ticket, which normally costs $750-1,500, increased to $9,000-30,000 due to scalpers. Panic purchases for international students came not in the form of toilet paper but paper-thin flight tickets.

Tony Wang had booked a March flight ticket to China before the “Five-Ones” policy, anticipating returning home at the end of the University of Chicago’s winter quarter. Other Chinese students attending schools under the semester system were not as lucky as Wang.

“I think my parents bought at least ten tickets [after the “Five-Ones” policy was imposed], [hoping] one of them to be valid,” He said. Most of these flights were canceled, and He flew home on June 7, after living alone for more than 90 days and relocating twice due to Berkeley’s housing policy.

Similarly, having bought around seven plane tickets that were all canceled, Xian began to feel pessimistic about his chance to go home this summer. “It’s kind of stressful. I’m okay, but my mom is crying all day, apparently. She’s not getting sleep. I called my mom the other day, and she just started crying,” Xian said.

On Chinese social media sites like Weibo, some Chinese international students expressed their disappointment in the “Five-Ones” policy, feeling unwelcome and ostracized by their home country. Although many netizens offered words of encouragement for international students, some Weibo users commented that international students were facing the justified consequences of their decision to attend college abroad, and did not deserve national attention or sympathy.

In April, when COVID-19 case counts in China declined and society reopened, international flights became one of the main sources of new cases. Some netizens blamed international students for being “virus carriers.”

In addition to pressure exerted by those on Chinese social media, Chinese international students also faced microaggressions in the States.

With an estimated 1.4 million Chinese students stranded overseas, the Chinese government started to arrange charter flights to bring students home in early April. Only students who met specific requirements were eligible to get on the government flights, according to a statement posted on the website of China’s Washington embassy.

Students brought back on charter flights would still need to pay for the ticket and costs associated with the mandatory 14-day quarantine (like accommodation and food) upon arrival in China. 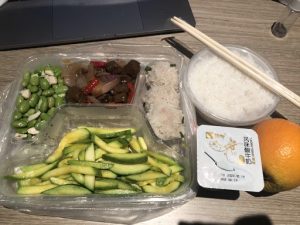 One of Hu’s quarantine meals in Wuhan. Photo courtesy of Xiaohui Hu.

The first round of charter flights was limited to students under age 18, and the second round was designed for graduating students and visiting scholars whose visas would soon expire.

“I’m lucky because my parents are willing to pay the expensive ticket,” Hu said. “But for students who studied abroad with a government fund, financial aid or scholarship, it might be hard for them to grab this opportunity.”

On the other side of the Pacific Ocean, Ric Xian lay on the mattress on the floor, staring at the bare ceiling of his USC apartment-style dorm room. He had started sleeping on the floor in the second week of his isolation, trying to become “down to earth” in his quarantine life.

Instead of wondering what the day’s hotel-provided lunch would be, like Tony Wang did, Ric made his own meals. Cooking filled the void that was his quarantine, as did watching YouTube videos. 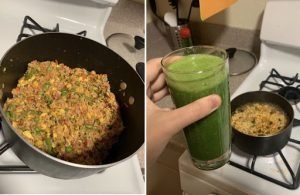 “I’ve been staying in my dorm [on my bed] the whole time. I probably gained 15 pounds in the [lockdown],” said Xian. “I was going to do something productive, but I just don’t have the motivation,” Xian explained.

Like many others, Xian’s summer internship was canceled and most of his social plans were put on hold due to the pandemic lockdown.

“I want to start a student organization for the Chinese LGBTQ+ community, and it will focus on their communication with parents and other conservative populations in China,” Xian said.

Xian’s face lit up while discussing his plans for the club. But these plans would have to wait.

On the bright side, Xian found the pandemic gets himself closer to his family. He used to Facetime his parents once a month and usually ended the chat with a quarrel. But now he tries to call them every day. “Maybe because we all focus more on each other’s well being in the pandemic, we don’t have time to argue about the minor things in our lives,” Xian said.

Being asked about the first thing he wants to do after he gets home, he said he’ll probably cook a meal for his parents, showing off the progress he had made in cooking. 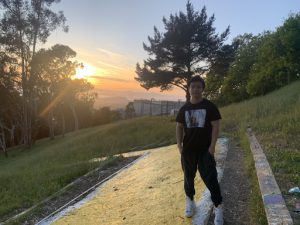 Alejandro He watched the sunset while hiking around Berkeley. Photo courtesy of Alejandro He.

As a gym rat, Alejandro He had to figure out a way to replace his workout routine when gyms were shut down for pandemic prevention. He bought a set of dumbbells and barbells (which made for some more heavy lifting in the process of moving), went hiking on mountains around Berkeley and practiced martial arts with other Chinese friends remaining on campus.

While Wang was lucky to get back to Beijing in March, he had to live in Chicago time for his whole spring quarter. Now, Wang has seen Beijing at 4am. He has driven through Beijing’s empty streets while the city sleeps, because it was the only night time entertainment he could think of.

“[I did] get to eat breakfast, which I never did in the past three years,” said Wang about his reversed day-and-night experience.

For the fall, administrations nationwide are scrambling to make concrete plans for the upcoming academic year, but are stymied by limited information they have about how COVID-19 case numbers will be in August, much less next spring.

Many students are exploring a gap year to escape pandemic anxiety, reflect on life goals or simply avoid paying the same tuition for online lectures.

Wang, the aspiring musician, has been waiting for a chance to experience being an artist — on a real life stage, not in a Zoom lecture. For him, taking a gap year makes sense.

But taking a gap year is also a luxury some students can not afford. Fear of missing out, parental disapproval and the complicated paperwork to request leaves of absence while maintaining F-1 visa status discourage some international students from temporarily walking away from college life.

“A lot of my friends probably are going to take a gap year, which got me thinking because I want to start school with my friends,” said Xian. “I don’t want to be one year ahead of them. It’s awkward.”

“USC is aware of the programs offered by Cornell and NYU, and we are working internally to determine if a similar program or model would be a feasible alternative for our [international] students,” said Georgia Stahl, the International Programs Coordinator of USC Annenberg School of Communications, in an email.

Though there does not seem to be one mode of operating in the fall that pleases everyone, COVID-19 has increased visibility and awareness of the trials and tribulations of the international students experience, and inspired more methods of academic cooperation across the globe.

Photo by Abby Chung from Pexels