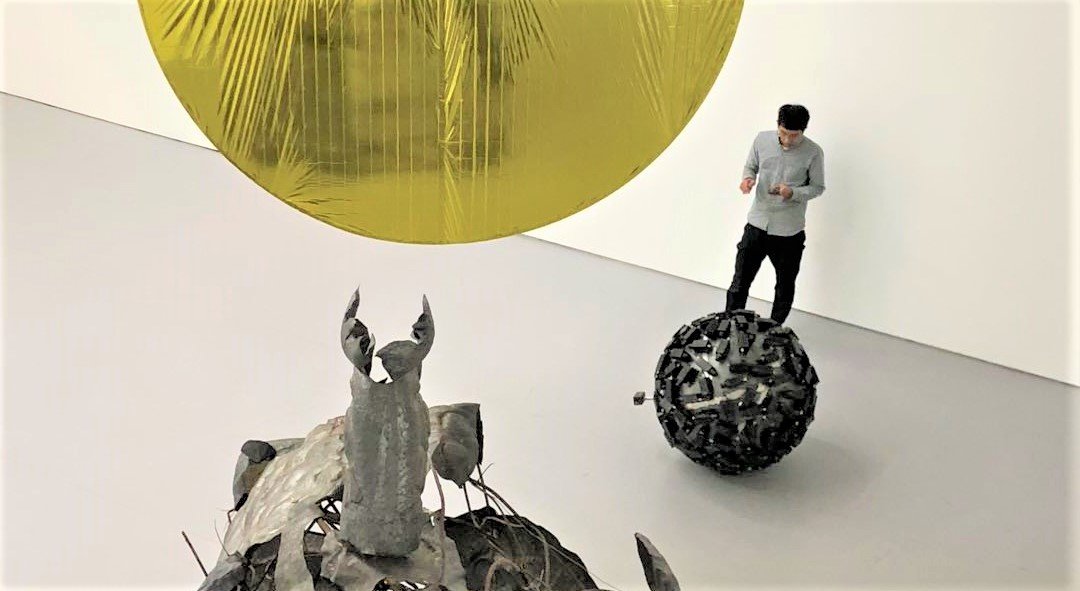 The Tale of 20 Chinese Artists, an American Curator and a Worldwide Pandemic

By Emma CockerellMarch 5, 2021 No Comments

Bright gallery lights illuminate the hulking metal figure. Comprised of an assortment of broad lead sheets, the figure appears at first disorderly and chaotic. But upon closer inspection, a chiseled Greek torso, a rooster head and other intricate reliefs take shape.

The “Composite Leviathan,” the signature piece in a Los Angeles exhibition bearing the same name, was created by Nanjing-based artist Yang Jian (杨健). Yang is one of twenty emerging Chinese artists showcased in Bridge Projects‘ Santa Monica gallery space from September 2020 to March 2021.

James Elaine, who has worked with emerging Chinese artists for more than a decade, curated the gallery at a time when U.S.-China tensions complicate exchanges and a worldwide pandemic shuttered galleries and museums. Bridge Projects’ gallery has prospered despite these and other challenges, and its success testifies to art’s enduring ability to bridge cultural divides. 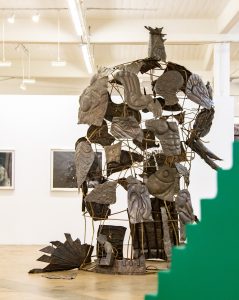 The Birth of a Metal Giant

Yang Jian was at first a performance and video-based artist. But inspired by the demolition of Heiqiao (黑桥), once an urban village popular amongst young artists and near Beijing’s famed 798 Art Zone, Yang repurposed leftover metal scraps.

The idea of “ruins” had also long fascinated Yang. China has ancient ruins, of course, but Yang sees “new” ruins. “In China, we have many ghost cities,” Yang says. “[China is] building a lot of skyscrapers, but nobody lives there. [These buildings are] beautiful from the outside, but could be [considered] a ruin.”

Heiqiao’s demolished art studios, which made way for a modern ecology park, embodied the very ruins which Yang sought to represent in his art. Twisted rebar lay discarded in the rubble, and Yang turned some of this rebar into “Composite Leviathan’s” inner skeleton.

The outer-facing metal sheets were a later invention. Over the course of a year, Yang visited dozens of government-commissioned sculptures, which stand guard in public entrances, shopping malls and parks in Beijing and Nanjing. Yang describes covering the sculptures with lead sheets and lightly punching the lead to transfer the shape of the sculpture.

Pieced together and fitted onto the rebar skeleton, the piece took shape as a twisted, non-conforming being. The figure was a composite of socialist uprising, mythological creatures and commercial venture.

Just as the sculpture fuses distinct images into one being, the name “Composite Leviathan” embodies disparate interpretations. Yang himself envisions disjointed and imperfect societies, both in his home country and in the United States.

“You can see the cracks in the system, not only at the governmental level but also in the medical [system], schooling … everywhere you can clearly see contradictions in the system,” Yang says. “Leviathan represents these kinds of images for me.”

Clover Zhou, the show’s Curator of Public Programming, interprets the piece in a similar way. While the show’s press release describes “leviathan’s” Northwest Semitic origins and Hobbes’ political fashioning of the word, Zhou personally “thinks of this title as a metaphor for contemporary society: ‘a composite Leviathan’ describes the simultaneously massive and yet sometimes badly cobbled together power structures, especially as observed in the large governments of political and economic powerhouses like the United States and China.” 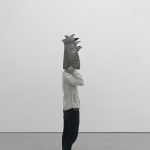 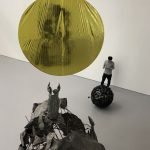 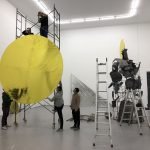 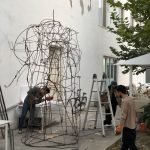 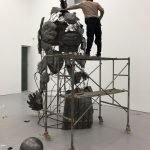 In naming the show, guest curator James Elaine focused less on the figure’s “cracks,” and more on the “light” let in by the cracks. He recalls suddenly remembering Leonard Cohen’s song “Anthem,” which features the lyrics “There is a crack, a crack in everything. That’s how the light gets in,” and finding the verse a perfect expression of “Composite Leviathan’s” significance.

“When artists create a work of art, they are letting light in,” says Elaine. “It almost doesn’t matter what they’re saying, [or] whether it’s good art or bad art. The act of creation … breaks the norms, breaks the old forms, opens up doors. It gets us out of our habits of what we think art is.”

A Sturdy Foundation of Friendship 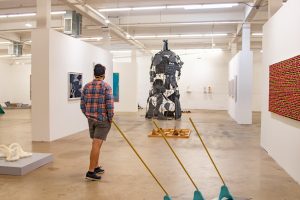 Now, each piece in the show stands placidly in Bridge Projects’ spacious gallery, where visitors can book socially-distanced appointments. The gallery’s tranquility gives no indication of the logistical difficulties guest curator Elaine and his team faced.

Chinese laws dictate how long art can stay abroad, and art that stays abroad past its these dates incurs steep fees. With Los Angeles under lockdown for much of 2020, Elaine was forced to delay the show’s opening.

“We were fortunate as half of the show was in New York at Luhring Augustine in 2019,” says Cara Megan Lewis, Co-Director of Bridge Projects. “For the other works, artists were able to retrieve works from their studios for shipping just in time — before studio buildings and neighborhoods were locked down in Beijing.”

“A Composite Leviathan” is just one of thousands of art events shuttered or postponed in 2020.

“A shockwave hit the art world, from China to the West Coast to Europe,” Elaine says. “Art fairs in Hong Kong, Basel, Switzerland and New York had to be shut down because people wouldn’t go. Commercial galleries were impacted, museums were impacted. But in time, they figured out ways of staying alive. Not just economically, but visually, by setting up [online] viewing rooms.”

Elaine and his team did just this – the creation of a virtual booklet of art featured in the show allowed viewers to contemplate pieces from home. The gallery’s parallel programming moved online, engaging people from across the U.S., the U.K. and China. A series of online interviews called Bridging Beijing allowed artists in the exhibition to strengthen their online presence in a permanent archive which will live on well after the close of the exhibition.

“In China, we say crisis can be an opportunity,” Zhou said in an email. “The pandemic pushed back the debut of the exhibition; but the extended timeframe gave us extra opportunity to prepare. We were able to slow down and focus on the details.”

The threat of a trade war between the United States and China also gave Elaine pause. Economic relations between the two countries reached a fever pitch long after plans had been finalized for the gallery. But despite mounting tensions, Elaine decided the show must go on.

“I first thought … what a horrible time to do a Chinese show in America,” Elaine says. “But actually, it was the perfect time. The name of the gallery, Bridge Projects, is [reflective of] what I saw myself as when I moved to China. A cultural bridge. I thought, this is perfect, this is what we’re all about: doing things against the grain and when things are difficult. To bring understanding … and bring nations with different ideas together.”

Much of “A Composite Leviathan’s” success is attributable to the deep relationships Elaine forged with emerging Chinese artists, who have showcased their work in Telescope, Elaine’s Beijing non-profit-style art gallery.

Elaine established Telescope in a former hair salon in Beijing’s Caochangdi (草场地) district, which borders the flashier and more expensive 798 Art Zone. It is nestled on a narrow street where fragrant food is cooked in clacking outdoor woks and stray dogs roam the alleys. The gallery’s modest exterior reflects its sincere aim, which Elaine describes as “creative freedom without the market control.”

Yang is one of the many emerging artists, most of whom work and reside in the same close-knit district, whose art Telescope has showcased. Elaine is an artist himself, and Yang describes the exchange of ideas about art that has defined their friendship since they met in 2015. Yang and his friends frequented Telescope, and endearingly said that “from the outside you can’t tell the difference between the art space and a convenience shop.”

Many of the artists that Telescope exhibited are now finding a bigger audience in Southern California. Elaine hopes to launch young emerging artists into the Western art world, where they otherwise would not gain exposure. Over the past several decades, Elaine has worked toward this goal UCLA’s Hammer Museum and other art institutions.

For Elaine, friendship drives his curatorial work. Like dominos, one past acquaintance led to a new curatorial idea. While many curators focus on theme creation, Elaine focuses on the friends – or the “family,” as he refers to them as – whose work he hopes to elevate.

“I’m not interested in themes — I’m not trying to prove a point,” Elaine says. “I don’t like to plug artists into my ideas, I like for them to plug me into their work.” 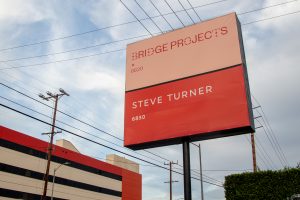 “A Composite Leviathan’s” reflects Elaine’s ambition of showcasing emerging artists on an international stage without fanfare or pretentiousness, giving them the credibility and attention they merit. That Elaine managed to create the gallery during a global pandemic and amidst sizzling international tensions is a testament to his drive and art’s ability to bridge cultural divides. The gallery’s success also rests on Bridge Projects’ pursuit of cross-cultural exhibits and eagerness to foster lesser-known artists.

“I didn’t want a show about politics — that’s not what I’m about,” Elaine says. “To have a show of Chinese artists in America is freedom. It’s a spiritual thing … that breaks out of misunderstanding and regulations.”

The pandemic has hit artists and art institution hard. For Yang, whose family has remained healthy, isolation caused by stay-at-home orders and the general state of the world have caused a creative slowdown.

“Personally, during the pandemic, I can’t do any new projects,” Yang says. “I have [had] many new ideas … but I feel like I need to change, to do something else. But how?… The energy, the passion for making is really down.”

Vaccines bring hope for a resurgence — in economic health, human vitality and in the art world’s energetic buzz. And in that brighter future, “A Composite Leviathan” will have laid the foundation for the thriving international careers of 20 artists.

“People wouldn’t have ever known that these artists existed,” Elaine says. “This show – people have said that they’re shocked. They can’t believe the quality of the work. … You walk in and most of the work I don’t think you would guess was made in China. It just shows that we’re all the same — people are people.”

Bridge Projects now hosts Chapter Two of “A Composite Leviathan,” which features thirteen contemporary artists from China. This second exhibition will run until March 13, 2021. While most artists appeared in Chapter One, the artworks have changed. The whole artist list is here.