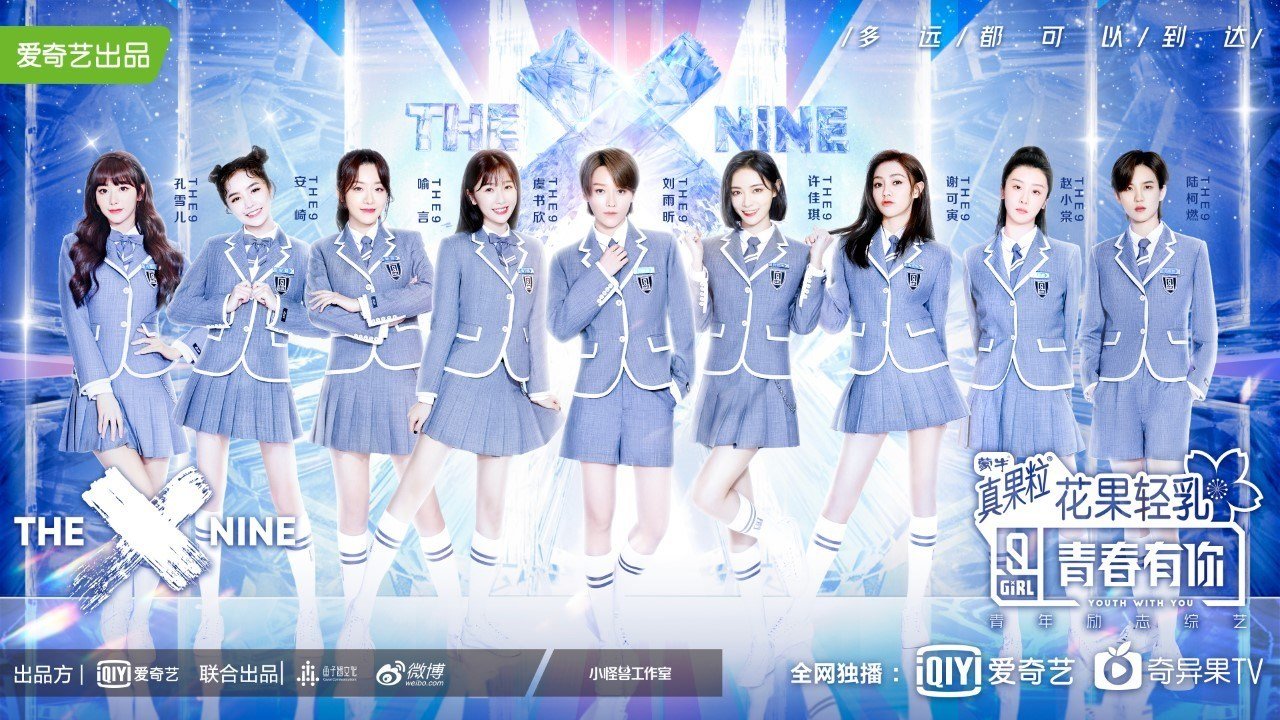 Korean Idol Culture Transplanted to Chinese Television: “Youth with You”

The uplifting theme song for Chinese variety show “Youth with You” blares in the background and the camera zooms in on 108 energetic “trainees” on stage. All don the same gray and white schoolgirl uniform, and the girls’ movements — and even their smiles — are synchronized.

In recent months, streaming platform iQiyi’s “Youth with You” has attracted an audience of 30 million. Viewers in China and across Asia are drawn by dazzling performances, but also by intimate footage of “trainees’” personality quirks, eating habits, special talents and daily routines as they cohabit in the same dorm.

The “trainees” — a term originally used to describe those training for entrance into a Korean pop group — endure time-consuming lessons, strict auditions and fierce competition to earn a place on stage. Each performance is ranked from A to F. Judgment is exacting and unforgiving, and trainees who receive an F grade in a round leave the show. Ultimately, only the top nine remaining singer-dancers, who have achieved this feat by online audience voting, are allowed to “debut” in public. “Debuting” describes the process of a group’s introduction to the public following years of intense training. In the case of Youth with You, nine winning trainees sign contracts with IQIYI and form a girl-group.

Style is as much a defining part of each trainee’s identity as is their voice. Trainees are stylish and trend-conscious, and each new performance features a diverse array of makeup and clothing looks. Trainee Yu Yan, who came out in third place in the final contest, pulled off a distinct “cool girl” style. Joey Chua (Zhuoyi Cai), from Malaysia, performed on stage in baby blue plaid skirts and mermaid braids, exuding an effortless, summery vibe.

“Youth with You” has enjoyed steady popularity in China since it first aired in March 2020. The show’s interesting — and at times controversial — content has made the show a top search result on social media platforms like Weibo. For international audiences, episodes with English subtitles are uploaded to IQIYI’s Youtube channel, garnering millions of views each from fans in and outside of China.

“Youth with You” captivates audiences with its fresh and engaging content, but it is not the first show to blend competitive singing and dancing with reality television. A 2016 South Korean show titled “Produce 101 ” set the blueprint for “Youth with You.” Featuring weekly rankings and elimination rounds, the show gained notoriety for engaging the public in “Hunger Games” type entertainment competition

“Youth with You” was not the first to seize upon the South Korean example. Tencent based its Produce 101 China, on the Korean show. as did iQiyi’s original “Youth with You,” utilizing male performers. Not everyone agrees that these Chinese versions of Korean shows have been entirely successful.

“Despite the continuing efforts by entertainment agencies to recreate K-pop’s success domestically or internationally, the Chinese idol economy is still far from mature,” said Caiwei Chen in a PanDaily article about Chinese idol shows.

“Youth with You” sought to leverage the fame of BLACKPINK member Lisa, who serves as a mentor to the trainees. Lisa is frequently ranked as one of Asia’s most influential artists. Her influence and popularity is on full display in the show — one trainee cries with joy when she makes her first appearance.

Footage of Lisa is popular not only because it showcases her artistic talents, but also for the stark contrast it offers between her happy, carefree influencer persona and her strict mentoring methods.

“I am guiding you like that because I have been doing that for five years,” Lisa says in an episode to justify her tough-love tutelage. “I need you to practice like crazy.”

“Youth with You” is just the latest testament to the interconnectedness of Chinese and Korean popular culture. Korean entertainment is not just emulated in China, but it also seeks to involve Chinese artists in new idol groups. The recent debut of the Korean girl-group “Aespa,” which has a Chinese member called Ningning (Yizhuo Ning), illustrates the creative impulses emerging from China nowadays.

Dianne Kim, creative director and digital editor for South Korean entertainment website Soompi, said the show is popular because it brings transparency to a usually secretive and anonymous process. “Youth with You” and “Produce 101” veer away from the traditional, entertainment-company-led process and depicted trainees as normal people.

“More importantly, the audience gets to choose the final outcome,” Kim says. “It’s this whole dynamic and emotional ride of seeing all of these girls overcome the challenges that made it so appealing to audiences.”

Snow Kong (Xueer Kong) was one popular trainee who overcame considerable challenges. Intimidated by her vast pool of fellow trainees, Kong went through a crisis of self-confidence. Over time, though, Kong overcame her self-doubt and successfully debuted, engaging viewers in an emotional and raw roller coaster.

While “Produce 101” and “Youth with You” project a largely positive image of the trainee process, these reality shows help perpetuate dark aspects of trainee culture. The theme song of Produce 101, which features the lyrics “Can you feel me … Can you touch me … Can you hold me” reinforces female objectification which is rife in the Korean and Chinese pop industries.

One episode, focused on self-discipline, features interviews with contestants to determine “who has the most desirable figure among all the trainees.” The top three trainees honored with the title share their dietary secrets with the camera. Lingzi Liu says that when eating hot pot, a traditional Chinese delicacy famous for its spiciness and its high caloric content, she only takes a few bites before asking waiters to take away her chopsticks and plates. Another prominent candidate, Yan Yu, revealed her outlook on eating, saying “The purpose of my life is not about food at all.”

In interviews, other trainees mention Yan Yu eating nothing but corn to keep her body camera-ready. With so many viewers, especially young viewers, the show risks glorifying unhealthy eating habits and showcasing an unrealistic lifestyle to those who idolize the trainees.

“To be honest, when I first heard YanYu’s philosophy [about eating], I felt bad about myself,” says Vivian Wang, a student majoring in sociology at University of Melbourne who follows the show closely. “She was one of my favorite trainees … I wanted to become more like her. So I used those words as my home screen so I could look at them everyday and try to eat less. But after a while, I realized this is just not right. Maybe the purpose of life is about food after all! I take so much joy after having a satisfying meal. Why do we have to suppress our most basic needs and instincts?”

However, while the imposition of East Asian beauty standards on young female idols is still prevalent, the pressure for exact conformity has alleviated to a great extent. “Youth with You” provides greater visual variety and acceptance of a broader definition of beauty. Xin Liu (Yuxin Liu), who ultimately won “Youth with You,” rocked crisp short hair and a gender-neutral makeup look, emphasizing the natural contours of her face instead of the traditional feminine looks and large doe-eyes that most trainees worked to enhance. Despite her unconventional style, Xin  Liu received 17,359,242 votes.

Plenty of viewers are judgemental. Anqi (Yaxin Chen), who came in sixth place, was criticized for being too short to succeed in the idol industry. However, standing at five feet two inches, Anqi proved her ability to thrive amongst taller trainees by delivering successful performance after successful performance.

Personality seems to be becoming a larger determinant of an artist’s success. Media related to a musician is not just limited to song releases and short television interviews. Now, groups can upload long “vlogs,” or segments that showcase members’ interactions and daily lives, to Youtube and other video sites. The now-popular “vlogs” of Korean groups like BLACKPINK and Momoland are successful for the same reasons as “Youth with You.” Stage performances are now just one part of the band experience — personal introductions and interviews are perhaps just as integral to a group’s engagement with fans, who have their favorites in a group.

The nine trainees who debut have distinct personalities and styles, which viewers are well-acquainted with by the end of the show. Shaking Xie (Keyin Xie), the rapper of the group, is known for her large appetite, which others poke fun at her for. Yushu Xin, who is seen as the “princess” character, loves to cuddle and acts like a spoiled child when she is with her group, demonstrating her girly side in front of the camera.

Now, music is not just music — China’s emerging musicians, taking notes from Korea’s booming industry, must have style, personality and some killer dance moves. “Youth with You” cultivates the very idols who check all these boxes.