Fentanyl is the principal enemy in the war on opioid addiction and overdoses. The strain of the COVID-19 pandemic has helped drive increased drug abuse; fentanyl is involved in the majority of overdose deaths in the United States 1. In May 2019-May 2020 period, there were more than 81,000 overdose fatalities in the United States. Many areas reported an increase of more than 50% in the number of deaths attributed to fentanyl and other synthetic opioids. Accidental overdoses are now the leading cause of death for Americans under 50 years old. Bill Bodner, head of the Drug Enforcement Administration in Los Angeles, spoke with USCT in the Spring. “Fentanyl is the number one drug threat”, Bodner says, and the isolation during this year of anxiety has led to more self-medication and destruction.

Fentanyl is 50 to 100 times more potent than morphine. Its spread is fueled by an illicit manufacture and distribution network that matches the insidious power of the drug being peddled. It is an inexpensive way to increase the power of drugs it is combined with. Unsuspecting users then ingest it via recreational drugs or painkillers. The addition of fentanyl into legitimate medicines is most frequent with Oxycodone and Xanax. Bodner issuing the warning that “the Xanax sold on the street is almost solely fentanyl now… one pill is enough to kill someone.” Whether you know the victim as a family member, a friend, a neighbor, Prince, Tom Petty, or Mac Miller, it is likely that none knew that they were taking fentanyl.

The fentanyl ravaging American communities is mainly produced in China 2. Chinese producers have flooded the US illicit fentanyl market through both legal firms and underground operations, accounting for 97% of the fentanyl seized by mail in 2016 and 2017. In 2019, under international pressure, China instituted significant regulations on this industry. Most notably, the Chinese government made all fentanyl drugs a controlled substance- also known as scheduling- as well as requiring licenses for the production or sale of fentanyl. These measures quelled much of the public outcry, but questions remain about their enforcement. Did they remedy the issue? 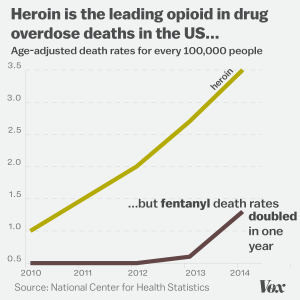 Our focus here is on Chinese-produced fentanyl, but as Vanda Felbab-Brown of the Brookings Institution explains, the opioid epidemic is American-made. Primary culpability rests with the U.S. pharmaceutical industry. Big pharma was able to deceive and influence agencies and physicians to overprescribe opioids, putting patients at risk, stripping them of their free will, and instigating the death of thousands entirely in the name of profit. Felbab-Brown says, “in the 1990s and throughout the 2000s, the pharmaceutical industry got more Americans addicted [to opioids] than the black market ever could or ever had.” By the early 2010s, it was clear that “benign” painkillers such as Oxycontin were, according to Felbab-Brown, “devastating the country.” A wave of lawsuits and tighter regulations followed.

As the supply of American painkillers shrank, Chinese pharmaceutical companies moved in to meet the opioid demand. Fentanyl was inexpensive and available. Fatal overdoses resulted. The economic benefits for Chinese producers and American distributors is obvious. The U.S. government estimates that China’s “poorly regulated” chemical industry is composed of 400,000 chemical manufacturers and distributors 3. Fentanyl vendors range from sheltered side operations within legal firms in Chinese interior cities like Wuhan to underground online dealers; fentanyl’s extraordinary potency-to-weight ratio provides these vendors with an easily hidden and transportable product via mail. The inspection challenge is compounded by the immensity of China’s chemical export industry, accounting for “one third of all global shipments [of chemicals and pharmaceuticals].” Bodner has noticed another prominent driving force: capital flight. Chinese businessmen are commonly participating in the illicit chemical trade to evade Chinese laws limiting capital flight. Let’s say a Chinese national wants to end up with US $1 million outside China. He gives the equivalent in yuan to a broker. That money is used to pay for chemicals shipped to Mexico and smuggled into the U.S. Payment is made in U.S. dollars. Everyone gets a share, and the individual who put up the money has succeeded in moving money out of China. Because this runs afoul of China’s laws, some hope it will incentivize Chinese government cooperation to stop it.

One regulatory breakthrough came two years ago when China banned the unauthorized production and sale of fentanyl. President Xi Jinping promised, including investigations into of known manufacturing sites, a crackdown on internet sites advertising the drug, and the employment of government special forces to investigate fentanyl trafficking. These changes never materialized, and by the end of the summer in 2019, then President Trump complained in a tweet, “President Xi said this would stop- it didn’t.” Here, Trump’s notorious blame shifting plays on a mistaken western belief- that China’s society and policy is no more complex than the product of an absolute ruler’s unilateral decisions. Many pressured Trump- and now Biden- to squelch fentanyl demand at home, wary of relying on the good will of a tyrannical adversary amid a trade war. In defense, Liu Yuejin, a senior public security official, says China’s regulations and enforcement have worked and argues that America’s drug culture is “main factor in the abuse of fentanyl there.” 4 Both American demand and ready Chinese supply seem to be at work. Felbab-Brown thinks that China’s measures have had an impact, but that a lot of fentanyl is still coming in. She notes, “we see much less going through mail and much more going through Mexico.” Bodner agrees. He says parcels coming into the United States directly from China are now “really insignificant.” The STOP Act, in effect since the start of 2021, which China is complying with, mandates that all packages from China must provide the U.S. with advance information on the sender, content, and recipient. Still, China remains the source of shipments into Mexico, which are often fentanyl precursors, tweaked chemical formulas, or entirely new opioids that are just as potent, just as addictive, and just as lethal, but aren’t being blocked by the Chinese government. 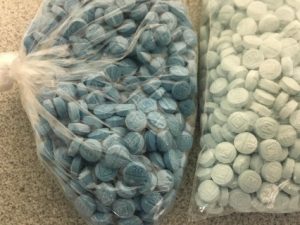 Fentanyl pills seized by the DEA. (photo by the DEA)

In the wake of China’s 2019 regulations, Felbab-Brown sees that digital access to fentanyl in the U.S. has become tougher. Whereas before one could simply google fentanyl and “50 suppliers would pop up, now the companies are much [more] hidden, they use code words, and need to operate more on the dark web.” Bodner disagrees, contending that the exponential transformation to digital only helped Fentanyl become more accessible, “it’s so easy for everyone to go online, find and pay for the drugs, and have them delivered to you in thirty minutes.” In addition, China’s diversified network, along with recent developments at the US-Mexican border, have resulted in alarming statistics such as an 800% increase in Fentanyl moving into Texas 5.
According to U.S. officials and researchers, China could do more. There could be greater cooperation with the U.S. Drug Enforcement Administration. China could add fentanyl precursors (building-blocks) to its prohibited list. China could work more with Mexico’s government to block shipments. Production and shipping facility inspections are inadequate. Felbab-Brown says, “most of the investigations against smugglers are stuff that we [the U.S.] fed them and they acted on rather than being done proactively… Are they diligently checking through every piece of cargo? Absolutely not. Are they diligently looking through all legal facilities to make sure there is no diversion? Absolutely not.”

Some are optimistic that China will want to do more to combat fentanyl production and shipping as part of an effort to improve ties with the new U.S. administration. Felbab-Brown believes that it is unrealistic to think China would work as closely with the U.S. as Australia does in battling methamphetamines, she says “China is willing to cooperate with the United States to SOME extent.” China wants to stifle illicit capital flight and wants to be seen as a cooperative actor in the regional and global efforts to halt illegal drug trading.
Although some believe China might be purposefully poisoning their geopolitical rival, Felbab-Brown and Bodner say they see no evidence of this. Moving forward, Felbab-Brown hopes the United States can get China to impose transparent monitoring measures. She says the U.S. should push China’s legal industry to have, “more transparency, better standard operating procedures, and better safety practices than they have.” Bodner wants China to implement “know your customer” regulations to require they identify their customers and the uses they plan for the chemicals they purchase. Such regulations have brought banks into the fight against terrorism and drug dealing.

While the danger from fentanyl continues, media coverage has dropped off. Felbab-Brown has noticed that relatively little attention is being paid to the rapid increase in fentanyl flowing into Mexico from China; an understandable relegation as the new Biden administration is forced to pinball from one crisis to another.
Bodner argues that the U.S. needs to recenter its focus. “Just look at the death rates,” he says. “The overdose death rates in this country are twice the number as people dying from gun violence. I think it needs more media coverage.” Felbab-Brown says many dealers may not even know that fentanyl is part of what they are selling. End users take enormous risks. Bodner wants this publicized because too many do not realize how widely fentanyl is added to other drugs. He says the U.S. government is seizing “literally millions of counterfeit prescription drug pills containing fentanyl every year.”

Fentanyl is deceptive. It is the most lethal drug in America, and many of these people lost their lives without knowing what they were taking. The issue calls for cooperation between the two competing superpowers to cut off the export of fentanyl and fentanyl precursors. This will make it harder for fentanyl to adulterate other products and reduce overdoses. Cutting demand is necessary, of course, but attacking supply can help reduce demand, and let us never forget who created that demand in the first place. This is an arena for U.S.-China cooperation, an arena where lives would be saved.