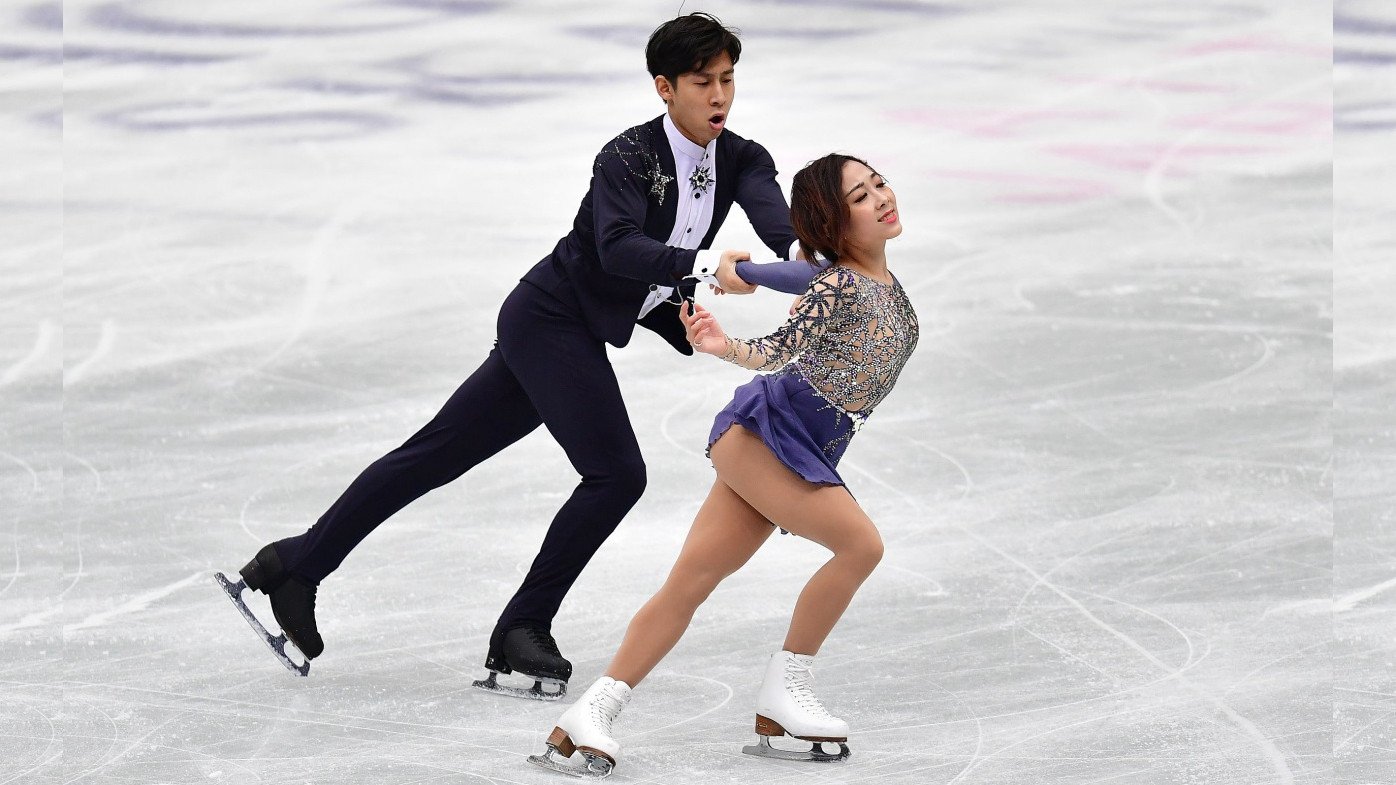 Figure Skating and Soft Power at the 2022 Beijing Winter Olympics
By Sarah SalisburyDecember 30, 2021 No Comments

Dortmund, Germany, 1980: Yao Bin and Luan Bo take the ice at the 1980 World Figure Skating Championships. They have never skated on a regulation-sized rink; its size is so foreign that they use only half of its surface as they practice. Their competitors, leagues above them in training and technical difficulty, watch them with skepticism at best and outright amusement at worst.

Yao and Luan are the first team to represent China in the pairs’ competition. They’ve learned to skate by looking at pictures of other teams, and on the world stage, they soon find themselves far above their depth. The story is the same at the 1981 and 1982 World Championships, and the 1984 Winter Olympics: at each competition, Bin and Luan place last.

This is the last straw.

Fast-forward several years: Yao, who had no way of keeping up with the best pairs in the world without access to the caliber of coaching available in other countries, turns a page. He begins coaching pairs, determined not to let his experiences become the standard. It is an uphill battle, learning to teach pairs skaters without access to the resources available to coaches in countries with established skating programs. Competitive skating was simply not an established sport in China at the time, so trained coaches, rinks and quality equipment were hard to come by, which made it all the more difficult to build up a program. But that is precisely what Yao did.

“They would eventually become Olympic champions in 2010, and the genesis of it was this guy, going to compete and, frankly, feeling like he was humiliated in a lot of ways,” says figure skating journalist Jackie Wong. “Basically, finishing last at the World Championships and saying, I’m going to do something about it, and [he] built this pairs program utilizing the coaching styles of Russia in pairs. Russia has always been very strong in pairs, [so he] studied lots of videos, all that kind of stuff … and built this empire.”

Nearly single-handedly, Yao brings Chinese pairs onto the scene. That owed largely to his innovative use of techniques from other disciplines. Susan Bronwell, who studies the politics of the Olympic Games, mentioned that techniques from diving, in which China has long dominated, helped Chinese pairs teams master their acrobatic elements. Yao also worked with coaches from other countries with established figure skating programs to learn how to teach pairs elements. That was the beginning of China’s turn as a pairs figure skating powerhouse. Yao has since retired, but his legacy persists as we head into the 2022 Winter Olympics, which will be held this February in Beijing. Yao’s protege, Zhao Hongbo, coaches two Chinese pairs teams with their eyes on the podium. There are more eyes on those pairs than others with the next Olympics being held at home.

But why do these Games hold so much weight for these two teams, the legacy-bearers of one of China’s greatest athletic success stories? To answer that question, one must consider the greater implications of this Olympiad and its place on the world stage.

Figure skating might not seem like a political tool, but it can be. That’s because of soft power, a concept proposed by political scientist Joseph Nye.

“‘Hard power’ is … using your wealth to make people do what you want, or the military,” says Susan Bronwell, who studies the politics of the Olympic Games, while soft power is “what you might call the power of persuasion.” It is the power of a country’s attractive national image to win the favor of other nations. As Bronwell explained, popular culture is a significant contributor to soft power: think of the global power of pop culture phenomena like K-pop to improve their nations’ images abroad. Sports are a part of that, especially through international events like the Olympics.

According to Bronwell, there are several ways for a host country to use the Olympics to bolster its image on the global stage. Particularly common are the opening and closing ceremonies, which give the country a chance to showcase its culture; the architecture of an Olympic stadium, which are an opportunity to showcase modernity and technological innovation; and organization, which helps a country to present itself as warm and welcoming. But so, too, can the medal count be a way to improve its global perception, at least in the eyes of governments.

“I think more than anything else it’s a sign of national strength,” Bronwell says.  “It isn’t 100 percent an indicator of how wealthy or powerful you are, and yet leaders seem to take it that way.”

That was a common refrain in Bronwell’s explanation of the soft power implications of the Olympics. It is governments who take the medal counts seriously, more so than the audience does.  The popular audience, now that Cold War-era nationalism no longer holds the influence at the Games that it once did, probably doesn’t place as much importance on a country’s medal count as leaders do. However, to countries like China with state-sponsored sports programs, the success of home-country athletes at the Games reflects well on, among other things, their wealth, power and organization. Thus, with China hosting the 2022 Games, Chinese athletes face pressure not only to perform to the best of their ability on the stage of a lifetime, but to give their nation a good name.

So: how does this relate to figure skating?

For one, it is a medal target in more disciplines than just pairs. One of China’s medal emphases this year seems to be the figure skating team event, in which 10 countries send skaters from all four events — men’s, women’s, pairs and ice dance — to compete as teams, tallying points for their relative placements in each discipline which are added up to determine winners. China, which has historically been weak in non-pairs disciplines, has made changes to its coaching to bolster its men’s, women’s and ice dance programs, which Bronwell takes as a sign that it is targeting the team event.

There are two reasons why China is targeting the figure skating team event. Firstly, because it is popular. Widely regarded as a marquee sport, figure skating consistently gets more viewers than many other sports, even in the less-prestigious team event. And secondly, figure skating is what Bronwell calls “low-hanging fruit”: a medal that, compared to the fiercely-contested individual medals, is relatively easy to add to the country’s medal count. In pairs, the individual discipline in which China has the best shot at a medal, that importance is even more pronounced.

Though there is a formal qualification process which will determine the qualifiers to the Olympic team, it is largely a foregone conclusion which pairs will attend.

“If it’s not Sui/Han and Peng/Jin going to the Olympics, I don’t know who it would be,” Wong says, citing the steep dropoff in depth between the top two teams and the rest of the field. Wong refers to 2018 Olympic Silver Medalists and five-time World medalists Wenjing Sui and Cong Han, and two-time Grand Prix Final medalists Cheng Peng and Yang Jin.

According to Wong, there is no one else anywhere near the level of those teams.

“If you put the top two Chinese pairs in the Olympics, they can finish in the top five. The third might not make it out of qualifying,” says Wong. Thus, unlike some countries in which qualifying for the Olympics is half the battle, the real test for these teams will be at the Games themselves.

For these two pairs, their performances matter particularly.

“In China in particular, it’s almost official policy that international sports performances demonstrate a nation’s strength and that it’s a superpower standing among superpowers,” Bronwell says.

Hence, when a Chinese athlete has potential to medal, it’s of the utmost importance that they do. The pairs themselves make no secret of that. Take Sui Wenjing and Cong Han, consistently China’s top-performing pair. They were gold-medal favorites at the 2018 Olympics in Pyeongchang but finished a surprising second. Since then, they have repeatedly stated in interviews that, no matter how much they may be disappointed at a lost chance for Olympic gold, it is Beijing 2022 they are eying. While they could have been Olympic champions in Pyeongchang, it is a home-turf gold that has always held more weight. Their focus on Beijing is indicative of how seriously China’s pairs are taking this opportunity to add to their country’s medal count.

Most people likely would not envision the spandex-and-Swarovski world of figure skating as a potential avenue for political gain, but like any Olympic event, if not more so for its greater popularity, it very well might be this February in Beijing. China’s storied, decades-long legacy in pairs figure skating gives it a leg up in the medal hunt. That, in turn, reflects well on its performance as a country.

“At a practical level, there’s no question that China’s outstanding performances in sports have helped change a stereotype, so it portrays Chinese people as physically strong, China as internationalized and modern, and at that level they’ve helped China’s image,” Bronwell says.

Teams like Sui and Han, and their equally-decorated predecessors, have been part of that facelift. Strong, consistent, competitive: these are positive traits of a country, and at a home Olympics, Chinese athletes will have a chance to challenge what the world thinks it knows about their country. What Bin Yao and Luan Bo could not do is now the work of a new crop of teams who could very well come to represent the attractive national image China wants to cultivate, and it is work they have done well so far.

It’s doubtful that any athlete is thinking about soft power and political dynamics while being launched over six feet in the air, but nevertheless, their performances are tools which — at very least in the eyes of political leaders — prove a country’s mettle on the world stage. China’s pairs figure skating program has been tested and proven true, but whether China’s representatives at the 2022 Winter Olympics will rise to the occasion and demonstrate China’s international standing as “a superpower among superpowers” remains to be seen.