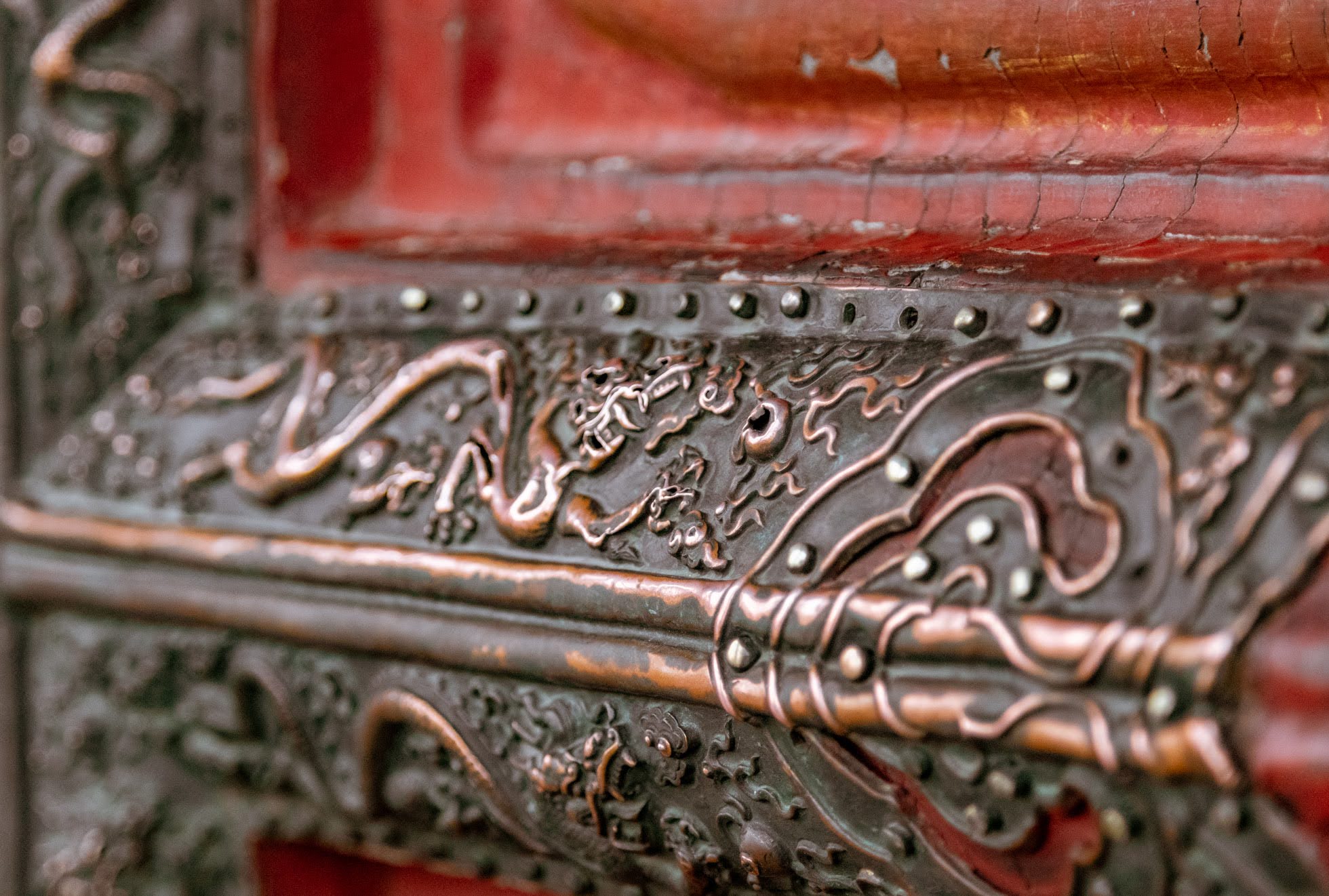 By Sarah SalisburyMay 2, 2022 No Comments

The threads that wove their way into Stanford medical school student Grace D. Li’s much-lauded debut novel “Portrait of a Thief” began to weave together out in a series of rather unexpected places.

In 2010, the Drottningholm Palace, home to Sweden’s royal family, was the staging ground for the first of what would become a rash of highly targeted, highly unusual art heists in European museums. Norway’s KODE Museum was next; Durham University’s Oriental Museum, Cambridge University’s Fitzwilliam Museum and the Chateau de Fontinbleau palace in Paris were later heist sites, and KODE and the Drottningholm Palace were visited once more in the following years — and those were only the heists which made the front page. Every single one of these art heists had an odd set of commonalities: the crews only took Chinese art.

The thieves seemed to know what they wanted and only took specific treasures —  ones looted from the Summer Palace were particular targets — while other valuable pieces of Chinese art were left behind. Whoever was responsible left no trace of their identities. The art which was taken has yet to resurface.

Every detail of the robberies points to meticulous planning, and they come at a time in which China’s elite is more interested in bringing home art looted by European imperial powers than ever before. Smashed glass, clever diversions, fire extinguisher foam to hide the evidence and China’s priceless treasures missing from display cases: it’s a tantalizingly interconnected set of images.

Grace D. Li, in her debut novel “Portrait of a Thief, posits a daring explanation for these occurrences: these thefts were the work of Chinese-American university students, all grappling with their diasporic identities, and all hired to bring China’s looted art home. Li’s inspiration from the project drew from the real-life heists, colloquially dubbed together as “The Great Chinese Art Heist” after a GQ article of the same name by Alex W. Palmer brought them to the public’s attention, and on media tropes that she enjoyed.

“I have always loved heist movies and shows,” Li said, “but this was the first time those heists felt more personal to me. My first thought was what a heist would look like if Asian Americans and/or college students were involved in it.”

In these thefts, she saw both a compelling storyline and a connection to her own experiences, in particular “grappling with what it means to be Chinese-American, and not feeling enough of both.”

Those experiences are reflected in “Portrait of a Thief’s” five-person heist team, comprised of Chinese-American college students with varied and complicated relationships to their heritage.  The question of what ought to be done with ill-gotten Chinese art in Western museums is as much a personal question to them as it is a political or historical one. Although no evidence points to the heists being the work of a team of students, “Portrait” shows how, in many ways, for China as a nation, these heists are personal.

To unpack the reasons for that personal connection, one has to start about a hundred and fifty years before the heists took place. Much of the looting of China occured during its “Century of Humiliation,” a roughly hundred-year period of exploitation by European imperial powers. Take, for example, the Old Summer Palace, or Yuanmingyuan.

A sprawling royal estate built in the 18th and 19th centuries, the Yuanmingyuan was looted and burned by the British and French in 1860. It is an incident that has long been a source of anger and grief for China. In recent years, the Chinese Communist Party has honed in on the burning of the Yuanmingyuan and its emotional weight as a powerful symbol of China’s humiliation at Western hands. Although China has not historically held great interest in repatriating its cultural treasures, the case of the Yuanmingyuan is one example of the change in that trend.

In 1991, China’s government published a statement on the incident stressing the importance of retrieving looted Summer Palace artifacts. The Chinese government is not the biggest player in the game of repatriation. However, such statements reflect a growing sentiment from China: repatriation of irreplaceable cultural relics is one way of righting wrongs done to China under imperialism. It’s time for stolen art to come home.

“The Chinese government has not been very active in pursuing repatriation,” art historian Sonya Lee stated, contrasting its relative disinterest in repatriation with that of the governments of Thailand, Cambodia and Benin, which have all put forth great effort to retrieve looted art and seen significant success. So most repatriation efforts in China are done by outside parties.

This is largely facilitated by China’s meteoric rise in the last handful of decades.

“There’s more money, more billionaires,” Lee said. “Nationalism is heavily promoted by the government, to be proud of China’s history,” said Lee – it’s a way of “trying to address the colonial past,” of taking back power — and even though it’s not a top government priority, there are powerful and monied people in China who have taken an interest in returning art as a means of reckoning with China’s past humiliations.

“Another group [with interest in repatriation] is the patriotic citizens — people who feel that China needs to do something about getting these objects back,” Lee said.

Lee was careful to specify that while NGOs as we know them in the United States don’t exist in China, unofficial organizations which might or might not have government backing — like the China Foundation for Folkloric Culture — have been active in repatriation efforts, too. Businesses, which often have government ties, have expressed vested interest in China’s looted antiquities. They’re the ones who often pull the most eyes when it comes to repatriation, and rumors fly about their potential involvement in the overseas thefts.

That same Poly Group appears in “Portrait of a Thief” as the catalyst for the novel’s plot, recruiting the five-man team of university students who carry out these heists. Li’s choice to assign fictional responsibility for the heists to the Poly Group is no accident.

Dig into China’s repatriation efforts and it won’t take long for the name “Poly Group” to come up. In 1998, the Poly Group, once exclusively an arms manufacturer, established the Poly Art Museum, a two-room operation in its Beijing headquarters created for the express purpose of displaying repatriated Chinese art.

They’ve spent over $100 million at auction buying back China’s lost treasures. They  were at the center of a recent controversy after Poly Group curator Jiang Yingchung spoke out against an upcoming film about the heists, which the company felt would imply that they were behind thefts of Chinese art overseas.

“Portrait of a Thief” makes a similar conjecture, positioning the Poly Group as recruiters and patrons of several groups of would-be art thieves. Although the company itself, which has interests in sectors ranging from real estate and arms manufacturing to film distribution and art collection, has vehemently protested against the notion that it has been involved in any illegal activity, it has not escaped suspicion. It functions in “Portrait of a Thief” not only as an employer, but also as a catalyst by which Li’s characters come to grips with the struggle at the heart of the book: the multifaceted reality of living in diaspora.

Though it was the narrative possibilities that arose from an intriguing string of real-life heists that initially caught Li’s attention, it was a sort of personal connection to those heists that became just as important to the story that would become “Portrait of a Thief.” “I wanted to write about art heists,” she said, citing her lifelong love of heist stories, “but I also wanted to write about identity and what it means to be Chinese-American as you grow into your twenties and figure out who you want to be.”

Each of “Portrait’s” five central characters relates differently to the seeming friction between their Chinese heritage and American nationality. It is because of those questions that they choose to accept the Poly Group’s proposal to steal back Chinese art living in overseas museums. It’s a way of righting wrongs and reckoning with their identity, a way to find the closure that they crave —  whatever that might look like.

A search for meaning and a clearer sense of identity is as much a part of the novel’s heists as the art itself. “Portrait of a Thief” points to a reality that is much harder to dispute than the likelihood of the novel’s premise: for China, the thousands of pieces of looted art in Western museums are lost facets of national identity.

Little is known about the who, what, or how behind these heists. Yet changing rhetoric in China surrounding the issue of art repatriation and the weight of history behind the loss of this art points to a compelling why.

“I wanted to think about how people like me and my friends would take on these art heists,” Li said, explaining her reasoning for the choice of a team of college students. That might be more of a reimagining of real events than a conjecture, but it nevertheless puts its finger on the pulse of the issue: for those who advocate for the return of looted art to China, repatriation and identity are inseparable.