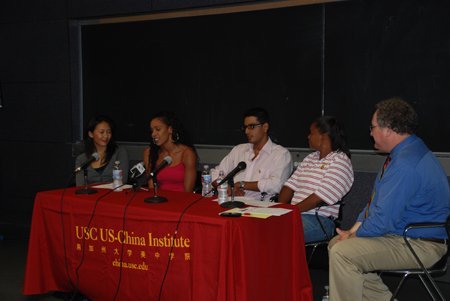 Hongping Li, USC’s head diving coach, talks about his experience working with the U.S. Olympic Committee at the Beijing Olympics.

Back in October, US-China Today hosted our first event, a panel discussion featuring two USC Olympians, one coach, and an NBC production associate. Swimmer Ankur Poseria, sprinter Carol Rodruiguez and running coach Tina Davis-Fernandes enthusiastically shared their experiences and some behind-the-scenes stories, while US-China Today editor Nancy Chen, who worked on NBC’s coverage of the Olympics in Beijing, told us how NBC worked to present China to the world.

One person could not be present at our panel: Hongping Li, USC’s head diving coach. However, US-China Today editor Chelsea Mason was able to sit down with Li to reflect on his time in Beijing this summer. Li has attended his first Olympics in 1984 as a diver for China and has since served as a coach for the U.S. team. In 2008, he returned to China to serve on the U.S. Olympic Committee. In the video interview above, Li tells us how times have changed since he competed for China, and how Chinese athletes differ in their training from American athletes. He also comments on the stringent security in Beijing, as well as how he helped the American athletes navigate the city and Chinese culture.

Update, April 9, 2009: Hongping Li’s accolades continue to grow as he has been named the U.S. Head Diving Coach for the 2009 international Canada Cup as well as the 2009 Pac-10 Conference Men’s Diving Head Coach of the Year.