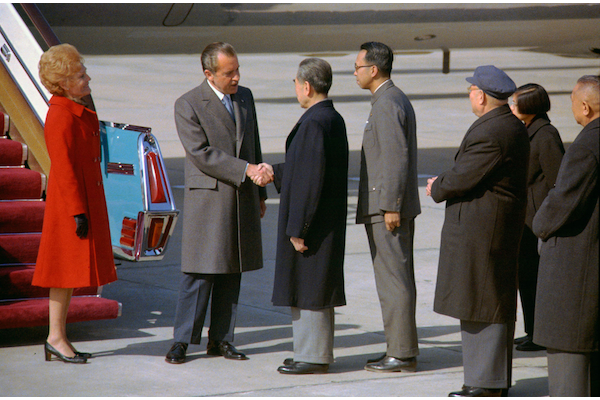 Assignment: China – “The Week That Changed The World”

Richard Nixon described his 1972 trip to China as “the week that changed the world.” This segment in the USC U.S.-China Institute’s series on American reporting on China focuses on coverage of that historic summit.

Richard Nixon’s visit to China in February 1972 changed the course of history — reshaping the global balance of power and opening the door to the establishment of relations between the People’s Republic and the United States.

It was also a milestone in the history of journalism. Since the Communist revolution of 1949, a suspicious regime in Beijing had barred virtually all U.S. reporters from China. For the Nixon trip, however, the Chinese agreed to accept nearly 100 journalists, and to allow the most dramatic events — Nixon’s arrival in Beijing, Zhou Enlai’s welcoming banquet, visits to the Great Wall and the Forbidden City — to be televised live.

The coverage was arguably as important as the details of the diplomacy. It profoundly transformed American and international perceptions of a long-isolated China, generated the public support Nixon needed to change U.S. policy, and laid the groundwork for Beijing’s gradual move to open China to greater international media coverage.

While the outlines of the Nixon trip are familiar, the behind-the-scenes story of how that momentous event was covered is much less well-known. This segment of Assignment: China focuses on journalists who went with Nixon and includes interviews with those officials who sought to shape the coverage. The Week that Changed the World contains previously unreleased footage of the Nixon visit, as well as interviews with journalistic luminaries such as Dan Rather and Bernard Kalb of CBS, Ted Koppel and Tom Jarriel of ABC, Barbara Walters of NBC, Max Frankel of the New York Times, Stanley Karnow of the Washington Post, and many others.

Reported and narrated by U.S.-China Institute Senior Fellow Mike Chinoy, formerly CNN’s Senior Asia Correspondent and Beijing Bureau Chief, and edited by USCI Multimedia Editor Craig Stubing, the film offers a fascinating and previously untold perspective on one of the most important historical moments of the 20th century. Clayton Dube conceived of the Assignment: China project and supervises it.

Many individuals and organizations have helped make this series possible. They have given generously of their time and energy, helped us unearth essential materials, guided us to invaluable sources, or provided the financial support necessary to sustain the research, travel, and technical help necessary to produce these compelling films. We thank each of these people and institutions for their help (and we list each in the credits for each segment). We invite you to consider joining them in supporting our efforts (click here to donate, please be sure to designate the U.S.-China Institute’s documentaries, or contact us).

The Week that Changed the World: The Inside Story of Richard Nixon’s 1972 Journey to China
(USCI/Nixon Foundation/Nixon Center symposium)