Take Me Out to the Ballgame… In China

By Peter WinterMarch 7, 2008 No Comments

Snow covers the ground at Peking University while students hurry along trying to keep warm in the winter chill. With final exams near, a deep silence is heard across the campus; everyone is deep into their books. Silence is everywhere, that is, except for a small cement rectangle in the middle of campus. The basketball courts, it seems, never lose their crowds here. No matter what storms or academic trials lie ahead, basketball is the true constant at China’s most famous university. Madness has set in here, and it’s not even March.

Even before former Shanghai Sharks star Yao Ming was drafted by the Houston Rockets in 2002, basketball fever was big in China. Michael Jordan, Shaquille O’Neal and others were widely known. With 7-foot-6-inch Yao Ming achieving NBA stardom, though, passion in China for the sport has skyrocketed. With many businesses looking across the Pacific for their future, it is no surprise that the NBA is at the forefront of American sports’ foray into China.

“The Cavaliers have enjoyed seeing our relationship with Chinese fans expand over the last several years,” Carper said. “We have local companies that have developed corporate relationships with us to further engage the China market via our games that are shown on Chinese TV. We also have local writers that are now publishing story content back to China.”

The NBA has been eager to increase efforts abroad since the Dream Team leveled the competition at the 1992 Barcelona Olympics. Preseason games were played earlier this year in Spain, Italy, England and Turkey as a push for European audiences. But it’s in China that the NBA has found its greatest success. According to the Washington Post, the league generated US $50 million in China last year, easily making China the NBA’s largest foreign market, even though it has only begun to be tapped.

“This past year we held the China Games,” said Matt Bourne, a NBA spokesman. “We also held a variety of grassroots events – over 170 events in 112 cities. We broadcast on 51 television channels, and we have our website, in Chinese, that has webcast games. We want to bring as much of the NBA to China as possible.”

Merchandising is a significant source of revenue. According to an NBA press release, over 400 million items were sold last year in over 20 thousand retail locations in China. Sales are expected to increase by 50% this year. The most popular items sold include apparel and basketballs; shirts with Kobe Bryant’s, Allen Iverson’s and Tracy McGrady’s names were the top jersey sellers. These players’ brands also top the list for American sales, though Kevin Garnett is the most popular player in the U.S. 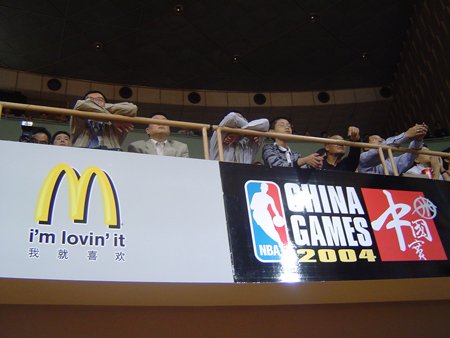 In addition to the merchandising push in China, the league has made other big changes. In October 2007, the NBA hired Timothy Chen, former chief executive of Microsoft’s China operations, as head of NBA China. The respected businessman now leads the first subsidiary of an American sports league in China, and is expected to be a crucial component in the league’s continued expansion.

“The opportunity for basketball and the NBA in China is simply extraordinary,” said NBA Commissioner David Stern in a recent press release. “The expertise, resources and shared vision of these immensely successful companies will help us to achieve the potential we see in the region.” 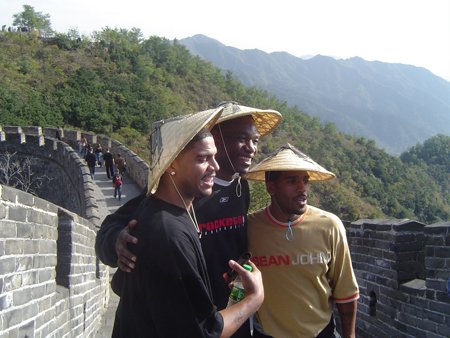 In October 2007, the Cleveland Cavaliers and Orland Magic squared off in Shanghai for a preseason match-up. The teams then flew to Macau where the Magic took on the Chinese National Team (minus Yao who, despite his recent foot fracture, hopes expected to be a part of the Olympic squad) before a rematch with the Cavaliers.

“Like all of us, we were overwhelmed by the support and interest from our fans in China,” Carper said. “Shanghai and Macau were absolutely wonderful hosts for us.”

But U.S. professional leagues are not just in search of marketing prospects. While the country’s audience provides both financial and publicity opportunities for the league, Carper added that China is also an increasingly important source of talent.

“Talent can come from any place on the planet,” he said. “Our league continues to show that. The global nature of our product just continues to expand. The NBA is the highest level of basketball in the world, and the Cavaliers, like other teams, spend a great deal of time searching for and evaluating talent from every corner of the world.”

Today, it is not just the NBA that sees China as a crucial frontier. The National Football League, the National Hockey League and Major League Baseball have been aggressive about their futures overseas. 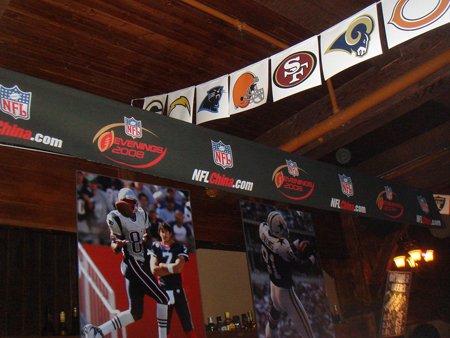 NFL Marketing in a Chinese Bar. Photo by Terence Lau

Michael Stokes, the NFL’s representative in China, said the league is taking a two-pronged approach to not only educate the public about the sport but also encourage them to play.

“First, we are taking a more grassroots approach by planning flag-football games,” Stokes said. “We are working with middle schools and universities to establish these leagues, and, in turn, teach the fundamentals.”

Stokes added that Chinese youth have taken a keen interest in the sport’s inherent strategy. Route-running, defensive schemes and the more cerebral aspects of the game have been a big draw.

The NFL is also focusing on media proliferation. “We have organized NFL viewing parties and tried to recreate that American-style sports bar feel,” Stokes said. “And it is not just showing the game. Along with the live feeds, we have commentators calling the game, educating the viewers.”

American football’s complicated nature has required the league to put increased effort towards educating its new fan base. Stokes notes that both CCTV-5 and the Shanghai Media Group are broadcasting several games a week, which he sees as critical in helping Chinese viewers understand the game’s intricate nature.

In the summer of 2006, three Chinese athletes, Gao Wei, Ding Long and Shen Yalei, were selected by the NFL to join an intensive kicker training program in Oregon. The three men, all former rugby and soccer stars, were part of the NFL’s attempt to break into Chinese markets. By putting a recognizable face in the game, Chinese audiences could immediately connect with the new sport.

The NFL’s foray into China has run into problems, however. An exhibition game between the Seattle Seahawks and the New England Patriots was scheduled in Beijing in August. The three kickers were to have a chance at suiting up for the game; however, ESPN later reported that the league cancelled the event, opting to focus its resources on the October 28th matchup in London. The U.K. matchup between the Miami Dolphins and the New York Giants was a sellout, and the league recently announced plans to return next season.

“Efforts in China are part of an overall NFL international strategy, along with the U.K., Canada and Mexico,” Stokes said. “The Chinese government understands that we are America’s most popular sport, and have been helpful throughout.”

But despite these efforts, NFL merchandise is relatively unpopular.

“For the NFL, the licensed product sales in China are practically nil,” said Terence Lau, the associate director at Weber Shandwick, a global media relations firm that works with the NFL in China. “They are working to change that in light of the 2009 NFL pre-season game in Beijing, but for the time being they have to build the business from practically zero. There are a few NFL jerseys and apparel that you’ll see around occasionally, but those are either parallel imports or factory seconds.”

While hockey’s TV ratings in the U.S. have wavered, the NHL also sees China as a hugely untapped audience. The New York Times reported last December that Charles Wang, owner of the New York Islanders, has made it his mission to develop the sport overseas. Born in Shanghai but an immigrant to New York at 8 years old, the businessman began Youth Hockey Project Hope in 2004, setting up ice rinks at schools across China’s Heilongjiang province. The co-founder of Computer Associates International has also pushed for broadcasts of Islander games in Mandarin, and hopes to carry games on Chinese television in the future.

And while baseball is not new to Asia, the MLB is making a new push into the Chinese market as well. The Los Angeles Dodgers and the San Diego Padres will play on March 15 and 16 in Beijing, selling tickets for as low as 50 yuan (about US $7).

“It’s an honor to be one of the teams bringing baseball to China,” said Charles Steinberg, the chief marketing officer of the Los Angeles Dodgers. “We hope to inspire children to play the game and add to the culture of China.”

And back on the courts at Peking University, students are still dreaming big. Not only are they fans of these American franchises, but also they see themselves as capable of playing in the big leagues as well. As scouts begin to tap China for new talent and exhibition games draw larger and larger crowds, it is safe to say that the popularity of professional American sports will only grow stronger in the future.

Peter Winter is a senior majoring in International Relations and East Asian Languages and Cultures at the University of Southern California.