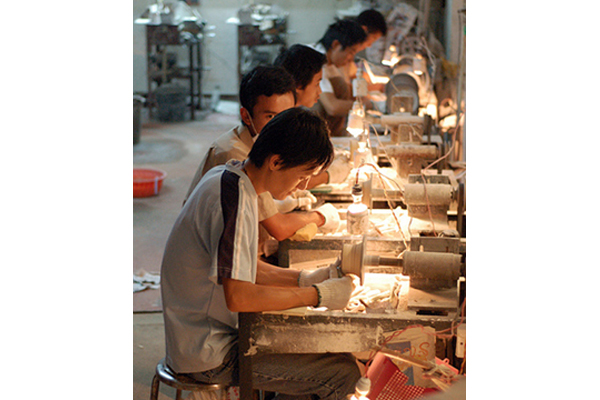 The state of working conditions has long drawn ire from Western countries, but change is in the works.

Though much of the world’s attention has been directed towards China’s bustling cities, a recent tragedy reminds us that most people still live and work in the countryside, sometimes in desperate circumstances.

A powerful reminder of how much more needs to be done to improve overall working conditions came last June when more than 500 workers were found virtually enslaved in brick kilns in China’s north-central provinces of Shanxi and Henan.

Long before this, Chinese law and law enforcement were scrutinized and often criticized by international organizations calling for protection of worker and other human rights .

As the Olympics draws close, the Chinese government wants to prove that changes are in fact being made. Improving worker protections tops its priorities in this realm.

The criticisms are familiar: low wages, long work hours and safety hazards. “Many factories that used harmful materials or processes not only failed to protect their workers against the ill effects,” notes a U.S. Beijing Embassy report, “but failed to inform them about the hazards and neglected to provide them with health inspections as required by law.”

Since a Chinese television broke the story of the slave labor conditions in the Shanxi and Henan provinces, the government has acted quickly. New labor regulations to better safeguard workers’ rights such as written contracts for all employees and raised labor costs took effect January 1, and some have judged it an important step forward. Chief among the new provisions is that workers who have worked at the same company for ten years will be entitled to an “unlimited” labor contract guaranteeing them financial compensation if they are made “redundant.”

Geoffrey Crothall, the English-language editor of the China Labor Bulletin, an organization dedicated to defending workers rights, believes the newly-updated labor law is, for the most part, beneficial for workers.

“Employers had found loopholes in the 1994 [labor] law, so the new law tries to fill some of those loopholes,” Crothall said. “And in that sense, it has done a good job.”

But this sentiment is not shared by all. Dorothy Solinger, a professor of political science at the University of California, Irvine, believes that these changes might not be permanent. Solinger’s Contesting Citizenship in Urban China is based on interviews with 80 workers and government officials.

“Even though the book was written ten years ago, still much of it pertains today,” Solinger said. “Not much has changed. Poor conditions still exist today.”

As Solinger noted, improvements in working conditions have not been easy to come by in China. The 2005 documentary “China Blue” focused on conditions in factories supplying multinational corporations in China, and shows how Chinese factory owners exploit workers’ lack of knowledge of their rights. According to the film, workers saw no point in rebelling against management and demanding higher wages. Believing that the government never took effective action, and that striking would only leave them unemployed, workers said they had no choice but to continue working in poor conditions.

The recent legal changes give many hope. “The more legislation that exists, the more it provides workers to file civil suit and use the legal system [to their advantage],” Crothall said. Organizations such as the China Labour Bulletin are available to help migrant workers use the law to support their claims. Crothall added that this law not only pertains to individual workers, but also provides groups or collectives with “basic rights and an encouraging labor environment.”

Even those who are encouraged by the new legislation feel it does not go far enough. As Crothall notes, “very few workers were consulted during the drafting of [the labor law].” While an “unlimited” contract amendment has been added, other needs of workers have been not been addressed.

Even more than longevity benefits, “workers are more concerned about wages and non-payment for benefits and overtime and poor working conditions,” Crothall said.

Solinger said more can be done by American corporations including Wal-Mart, Toys “R” Us, American Eagle, Nike and Timberland. Organizations such as China Labor Watch have threatened to release information concerning these corporations and their non-compliance with internationally-accepted laws.

“These corporations do not like the pressure [they receive from organizations], and for that matter, do not like press releases,” Solinger said. “However, they have not shown much effort to cooperate with these organizations.”

A spokesman from Wal-Mart, however, disagreed.

“Anyone can say that really, that more can be done,” said Richard Coyle, the director of international corporate affairs for Wal-Mart. Coyle said Wal-Mart is working with organizations Business for Social Responsibilities and the U.K.-based Ethical Trading Initiative, an alliance of companies, non-governmental organizations and trade union organizations, to better working conditions worldwide.

Coyle, who pointed out that it is suppliers and not Wal-Mart itself who owns factories in China, said suppliers are forced to sign a code of ethics guaranteeing they will not use child and forced prisoner labor when signing a contract with Wal-Mart.

Still, there is much work left to be done, Coyle said.

“This is not a Wal-Mart problem, this is industry-wide,” he said. “How do you get the best results from a business perspective as well as an ethical perspective from the industry?”

Solinger believes the Olympics may act as a catalyst for positive change. According to Solinger, the most effective weapon the organizations have to combat violation of human rights is the media. The extensive reporting on the use of lead paint in select toys caused Chinese authorities to crack down on many unregulated producers. Similarly, hundreds of unlicensed food processing operations were closed after stories of tainted food drew unwelcome attention to hygiene and storage standards. Chinese officials brought journalists and camera crews with them as inspections and closures were carried out.

“Although China is not going to give in to everything we demand,” Solinger said, “they are willing to make it look like they are doing something about it.”

Crothall doubts the Olympics will have any significant effect on workers’ rights. To Crothall, whether or not this and other labor legislation is effective is a function of whether or not it is rigorously and continuously enforced, not so much when it is enacted and the prominence of initial government action.

“The Chinese government tries to show they are cracking down, but a month later the story disappears, as was the case for the slave labor discovered in Shanxi province,” he said. “And when the government claims they are in fact punishing officials for allowing these situations to go on for too long, ‘punishment’ simply means removal from office.”

Ultimately, it’s clear that the fight for workers’ rights is a long-term one. Having supportive laws on the books does make a difference. Research by University of Michigan political scientist Mary Gallagher, for example, shows that increasing access to legal remedies encourages younger Chinese workers. Discussing her work at a January presentation at USC, Gallagher noted that even when their lawsuits have failed, these workers found access to the legal system reassuring. So, while it may be incomplete and while the Chinese state may not fully enforce it, the new labor law is an important step in the right direction.

Aaron Wong is a junior studying International Relations (Global Business) at the University of Southern California.