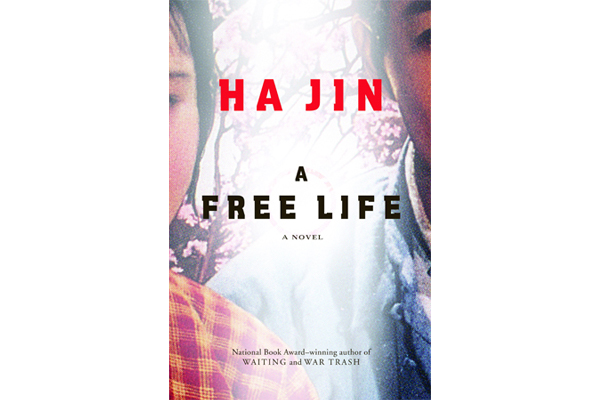 Acclaimed Chinese author Ha Jin draws on his own experience as an immigrant in his first novel set primarily in America.

Ha Jin (Jin Xuefei) has gradually moved westward over the course of his career. In Waiting, the winner of the 1999 National Book Award and perhaps his most acclaimed novel, America is little more than a distant mirage to a provincial doctor living through the Cultural Revolution. War Trash, Jin’s previous novel, takes place during the Korean War and tells the story of a Chinese officer’s struggle to survive as an American prisoner of war. While the majority of the novel takes place in various detention centers scattered throughout Korea, the novel is bookended by a prologue and epilogue that takes place in Atlanta.

A Free Life is Jin’s first book largely set in the United States. The novel recounts the trials of Nan Wu, a Chinese graduate student studying in Boston when the Tiananmen Square massacre occurs. Disillusioned with his government’s use of force on its citizens, Nan decides to cut ties with mainland China and remain in America with his wife and son. This sprawling novel has many of the traditional ingredients of immigrant literature—the foreign land, the initial struggle to survive, the acquisition of language, and the eventual cultural integration—yet these familiar parts manage to add up to startlingly original whole.

After deciding to claim asylum in America, Nan moves from the classroom to the workroom in order to provide for his family. Apart from Nan’s memories of China (specifically, of his ex-girlfriend, Beina) and his encounters with the diaspora, the narrative unfolds with a universality applicable to any immigrant in any nation. Nan works a series of dead-end jobs, gets ripped off and intimidated by duplicitous locals, and counts pennies the way most Americans count dollars. Some of the novel’s most moving moments occur in these first two hundred pages, as Nan begins to realize that social mobility is limited even for fluent, native-born Americans. After struggling unsuccessfully to find work for weeks, Nan, in dialogue phonetically rendered by Jin, blurts out to his interviewer, “The troos is that no matter how hard I work, I can never be more zan a Social Security nahmber.” The interviewer replies, “I can’t either,” and hires Nan on the spot.

This is the most autobiographical of Jin’s novels. Like Nan, Jin was a graduate student in Boston during the prodemocracy demonstrations that rocked Beijing and other Chinese cities in 1989.  Those protests and their violent suppression changed both him and China; in its wake, he decided to remain in America. Also like his protagonist, Jin wanted to become a writer. Unlike Nan, however, Jin has enjoyed immense success. In just over ten years since the publication of his first collection of short stories, Jin has either won or been nominated for every major American literary award—an achievement that only a handful of American-born authors can claim, let alone immigrants working in their adopted language. Perhaps then, it is fitting that Nan’s piecemeal acquisition of the English language symbolizes his gradual assimilation into American society.

Nan’s struggles with English are at times echoed by his author. Jin is often likened to Vladimir Nabokov, the Russian novelist who achieved a poetic virtuosity in English that few native-speakers have ever rivaled. The comparison is unfair, chiefly because Jin doesn’t come close to Nabokov in his mastery of the language. A Free Life is peppered with grammatical mistakes (“the lobby was swarmed with people”), anachronisms (“[they] wouldn’t hesitate to neck in front of others”), and words that this reader couldn’t find in the dictionary (“empleomaniac”). That being said, perhaps the cultural-linguistic gulf between Mandarin and English is greater than between the latter and Russian. If Nabokov’s prose soars higher than Jin’s, it’s because he had a lower hurdle to clear. Even so, Jin is able to create passages of elegiac beauty:

Many white houses on the western shore were drenched in the sunlight and nestled in the woods on the hills along the water, against which herons and gulls were sailing and bobbing.  Far away, a yacht was churning a whiteish trail. Swarms of sailboats were moored in the southwest, their sails fluttering like wings. Other than those small vessels, there was no trace of disturbance on this wide and tremendous river.

As the novel progresses, Nan moves from Boston to Atlanta and buys a run-down Chinese restaurant. Throughout this time period he works his body without rest, while his soul subsists on dreams of Beina and of poetry. Will Nan leave his wife for Beina? Will he write poetry in English? These two questions form the twin-motor that propels the narrative over its six hundred pages. Unfortunately, the story sits dead in the water at numerous points. Jin’s previous two novels could be read as textbooks on pacing, plot, and subtlety. Waiting and War Trash offered neither offered literary pyrotechnics nor postmodern cynicism; they did, however, create something that is much more elusive in today’s literary landscape: beautifully crafted stories about unabashedly ordinary people. Both novels achieved a balance absent from A Free Life, which is structured by a multitude of two and three page chapters. Presumably, Jin uses this technique to represent Nan’s struggle to build a new life, piece-by-piece, day-by-day.  Yet, many of these short chapters are extraneous to the story and soon become repetitive. In addition, Nan’s frequent bursts of immaturity and his disregard for the feelings of his devoted wife make him a somewhat unsympathetic protagonist to follow for the length of this protracted novel.

This is regrettable because the reader who persists to the end is rewarded with a stunning collection of Nan’s English language poetry.  In his last twenty-seven pages, Jin portrays the traumas and consolations of the immigrant experience with a poignancy lacking from the previous six hundred. A Free Life transcends the majority of contemporary novels in the coming-to-America genre, which are generally concerned with the attributes of culture and society that cannot be carried from one’s native to adopted nation. For Jin, nationality itself is an ambiguous and somewhat empty word. Nan puts it more eloquently in one of his poems, “Eventually you will learn:/ your country is where you raise your children,/ your homeland is where you build your home.”

Anthony Marra is a 2008 graduate of the University of Southern California.