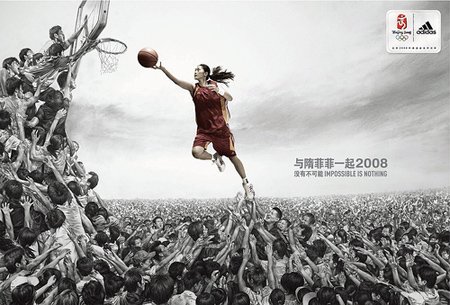 Have You Seen Me Yet?

Before 1984, the five-ring logo of the Olympic Games wasn’t seen on drink cups and film boxes. But the Los Angeles Games made money, in part by leasing sponsors the right to use the logo on their advertisements and products. A profit of more than US$225 million was earned, (a drastic reversal from the 1976 Games in Montreal when the city nearly went bankrupt). Since the Los Angeles Games, the rights to the rings have turned into a multi-billion-dollar commodity.

As the lead organizer of those Los Angeles Games, Peter Ueberroth became an international figure and an American star. He was named Time Magazine‘s Man of the Year that year, later served as commissioner of Major League Baseball, and is currently head of the United States Olympic Committee. As for the five rings, corporations now pay tens of millions of dollars to borrow them for their advertising.

The Olympic Partner Program (TOP) was established in 1985 and holds the marketing rights for both the Winter and Summer Olympic games. Prior to the TOP program, funding the Olympics was solely the responsibility of the host city. While today a city hosting the Games still spends billions—China’s government has spent about US$43 billion for the most expensive Games in history, far more than the record $15 billion 2004 Athens Games— in the early years of the program, it eased the strain. Now, in exchange for large checks, which provide a sizable income for that Olympic budget, corporate sponsors are given various advertising rights and may employ the Olympic five-ring logo.

The International Olympic Committee (I.O.C.) estimates that the TOP program will generate US$866 million in revenue during the 2005-2008 Olympics quadrennium (the four year cycle from after the Athens Games through the Beijing Games) Writing in the New York Times, Michael Payne, former marketing and broadcast director of the I.O.C., estimated that altogether Olympic sponsors will spend US$2.5 billion for various levels of advertising rights.

For example, most global sponsors, including Coca-Cola, McDonald’s and General Electric, paid up to US$100 million (far above the $30-40 million paid in the 1990s) for advertising rights within China and Hong Kong during the current Olympic quadrennium, and have creatively made the most of them.

McDonald’s partnered with the I.O.C. on a reality TV show called McDonald’s Champion Kids that follows 300 children from around the world who were chosen to attend the Games, which airs on China’s national television network, China Central Television (CCTV). McDonald’s has also been running its “I’m Lovin’ It When China Wins” campaign to appeal to the dreams of the Chinese to take more gold medals than the Americans this year.

Last year, Coca-Cola launched its “One Year to Go” campaign. “In the ‘One Year to Go’ until the Olympics in Beijing, there was a huge outdoor advertising campaign where literally almost every bus stop in Beijing had Coca-Cola advertisements,” said Petro Kacur, Coca-Cola’s senior manger of communications at the Olympic Games. “That’s continued throughout the year with programs during the Chinese New Year, last year around the national day in China, and we use sports figures-Yao Ming is one of several athletes that’s a spokesperson for the brand in China.”

Yao Ming is also instrumental in another Coca-Cola campaign, “Shuang is Coming” (“shuang” means “uplifting refreshment” in Chinese), and is featured in the television ad “Shuang City”. Coca-Cola also plans to use this theme at its events and exhibitions during the Games, including their spot on the Olympic green. 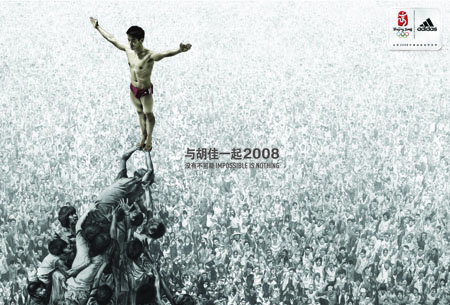 But Coca-Cola is also making good use of the internet. Coca-Cola collaborated with eight Chinese visual artists and eight Western musicians in a project called “WE8” that created a series of specially designed bottles and soundtracks inspired by themes of peace, happiness and harmony. A series of interactive games and projects relating to this theme are on the Coca-Cola website.

Coca-Cola is far from alone in going beyond Chinese television with its Olympic advertising campaigns. Many firms are focusing on the digital universe.

There are about 253 million internet users in China, according to the China Market Research Group (CMR), with 80% of them under the age of 30. Chinese youth spend more time online than they do watching TV and lead the world in internet blogs with 31 million–compared to America’s 27 million.

Chinese youth living in metropolitan cities like Shanghai and Beijing spend nearly 20 hours a week online, while American youth spend only about 12, according to CMR.

Consequently, companies are expected to allocate more digital advertising in China than in the U.S. So with the Chinese youth spending more time on the internet than youth in any other nation, internet ad spending—like everything else in China—is booming.

While internet advertising only claims about US$100 million of the US$2.3 billion Olympic sponsors will spend on their Olympics campaigns, digital ad spending for the 2008 Games is more than any other Olympics thus far, according to a report by Lehman Brothers.

“They [Chinese youth] will most likely be going onto sites like Sohu and QQ to get on-going info on the Olympics,” said Shaun Rein, the founder and marketing director of CMR, in an e-mail letter, referring to two of China’s most popular sites. “Advertisers need to be there in order to reach the plum target group that is Chinese youth.”

Sponsors are taking a variety of advertising approaches to keep up with the social-networking trend in China. The reality show “McDonald’s Champion Kids” is streamed on CCTV.com and has its own blogging website, and Coca-Cola’s “Coke Side of Life” marketing campaign is almost entirely online. The company’s colorful, interactive website allows you to design your own bottle in the “Design the World a Coke” feature, or download music and screensavers from their WE8 site. The site also features “chat goodies” to use in the official blog, CokeTag.com, where you can “share what matters.”

“We look for ways to engage with people where they spend time, and wherever they have a passion,” Coca-Cola spokesman Kacur said. “Increasingly, people spend time online, and certainly you’ll find Coca-Cola right there with them.”

Adidas is also making heavy use of the internet. Its Olympic marketing campaign features the slogan “Together in 2008, Impossible is Nothing” and is the largest adidas has ever launched in a single market.

“The campaign includes various platforms enabling consumers themselves to get closer to the athletes and to the Olympic Games, and join in the celebrations,” said Katja Schreiber, communications manager for Adidas China, in an e-mail. “Our website, 2008.adidas.com, is a key component of our consumer interaction.”

“We counted more than 1.2 million visits to our website in a little over two months, with the average time spent on the site exceeding 10 minutes. In the same time period, more than 2 million ‘Adikas’ [online trading cards] were distributed, with more than 70% of them being acquired through games on our website.”

Adidas ads, featured on the internet as well as television, show Chinese Olympians such as basketball star Sui Feifei and soccer legend Zheng Zhi being lifted up and cheered by exuberant Chinese fans. In one commercial, Chinese Olympic diver Hu Jia takes his dive from atop a scaffold of people, who boost him into the air for his jump. Then, after completing a back-flip, Jia submerges elegantly into a pool of people, who then cheer and wave in succession, causing a ripple effect.

“The concept of the campaign is all about rallying the nation and showing how the entire Chinese nation is supporting their athletes and the Games themselves,” Schreiber said.

Internet advertising is also presenting opportunities for companies without the brand awareness of a giant like Coca-Cola. Lenovo, the Chinese computer company who bought IBM last year and the only Chinese company with global Olympic sponsorship, is seeking to establish itself as a global brand. In the wake of the recent backlash against Chinese consumer goods, Lenovo has its work cut out for it. But the company is seeking to fix this during the Olympics, and the internet is a large part of its advertising campaign.

The company will sponsor an internet lounge inside the Olympic Village, and has partnered with Google to create a blog platform for athletes which can be found on their website. In addition, Lenovo has created an Olympics Facebook application that allows users to cheer for their favorite teams and athletes, and follow the athletes’ blogs and breaking news during the Games.

But still, Adidas and Coca-Cola are among the companies with the firmest grip on the Olympic marketing reins, and they have deliberately steered the advertising chariot online. The Beijing Olympics may only be a catalyst for this corporate race toward Chinese consumers.

“The marketing industry in China is evolving at a massive pace,” said Payne “Now, with the programs and investments companies are making in the Olympics, you’ve got a lot of Chinese companies that have built up the marketing spirit.”

“Clearly, the communications channel being offered by the internet on a direct basis is becoming another more important part of companies’ portfolio.”

Indeed, it looks like this year Olympic advertisers will be living more on the digital side of life.