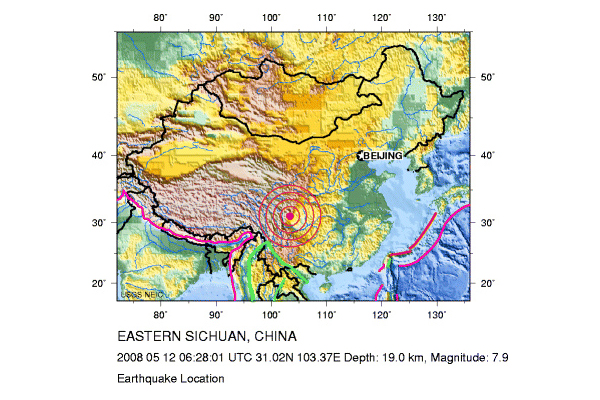 Amidst a pile of rubble that was once a school, parents clung to one another as cranes and military police searched for the children buried under piles of concrete and twisted steel. More often than not, when someone was found, it was too late.

“I hope that’s the most horrible thing I ever see,” said Andrea Hsu, a producer for NPR’s All Things Considered whose team covered the May 12 earthquake in Sichuan, China.

Being able to witness such destruction and desperate government efforts is unusual in China. The government requires that Chinese media stress the positive. Reporters working for foreign media outlets often find themselves mired in government bureaucracy designed to prevent negative reports of China from reaching foreign outlets.

“The whole climate for reporting by foreign media was pretty tight,” Hsu said. “A lot of people just didn’t want to talk to us because there was a lot of backlash against foreign media. And so a lot of official government offices and police said no to interviews, or didn’t say no but told us to apply to such-and-such bureaucracy.”

But for several weeks after the earthquake, Chinese and foreign journalists alike found themselves with unprecedented freedom. Of course, a few days passed before many reporters could get on the scene. But the All Things Considered team from NPR were working on stories from Chengdu, not far from the quake’s epicenter, on May 12. In fact, Melissa Block was recording an interview when the quake struck. This enabled them to get to stricken areas that very night.

“It seemed like there was pretty much wide-ranging access,” said Melissa Block, host of NPR’s All Things Considered. “If you could physically get to an area where the earthquake had been the most devastating, you could report from there.”

“That first night, because I think there was just so much chaos, we were able to walk onto the site of the school collapse where there were hundreds and hundreds of parents,” said Hsu, who worked alongside Block in covering the crisis.

Yet this access was most definitely not the will of the Chinese government. Hours after the earthquake struck, the Central Propaganda Department stated that no journalists were allowed in the disaster zone. Such decrees are common during a Chinese response to crisis—in 1976, one of the most deadly earthquakes of the 20th century hit Tangshan, China, with virtually no coverage of the event.

But this time, the Central Propaganda Department was defied. Two days after the quake, so many reporters had ignored the mandate that the department issued a new one stating that reporters could only move with rescue teams. Even with this order in place, reporters were still moving around freely.

Richard Stone, the Asia Editor of Science, was able to visit Southwest University of Science and Technology in Mianyang, Sichuan a week after the earthquake. There, he found what reporters from all over the world were finding: suddenly, reporting was much easier.

Often in China, professionals must seek permission to speak on the record, and often this permission is not granted. However, the leaders of Southwest University were relatively open to Stone. “They were quite interested in telling their story about what kind of damage they had suffered and the loss of lives there,” he said.

Chinese citizens who had been personally affected by the disaster were also unusually open.

Block recalled one family whose son had been buried in the rubble of their apartment building with his grandparents. Block and Hsu first met the family as they were frantically searching for help. The journalists spent the day with this family as they watched machines excavate what was once their home. Late in the afternoon the bodies were found. But later that evening, the mother sent a text message to the team thanking them for sharing their story with the world.

“People’s willingness to speak to us really struck me,” Block said. “Even in their darkest hours when they were going through unspeakable trauma and grief they were open to letting us be with them.”

However, the deep-seated distrust of foreign media was not entirely absent. “There were so many people whose first question was ‘you’re not with CNN are you?’ because CNN had such a bad reputation at the time,” Block said.

But it appeared that in the end, the need to talk overcame many, particularly at schools. People became critical and somewhat outspoken once they noticed schools had collapsed while government buildings still stood.

“At the schools [the Chinese people] were very angry and they talked about corruption on a local level,” Hsu said. “But everybody was very quick to praise the central government.  I think also it’s very common in China to hear a lot of complaints about the local government, and praise for the central government…it’s the outlet for dissent at some level.”

This was part of the reason for the media restrictions that were soon reimposed. Authorities began to crack down as early as late May as distraught parents became more vocal. Today, these parents are being persecuted or offered money in exchange for their silence. Hsu said fellow NPR correspondent, Robert Gifford, was asked by authorities to leave a school he had previously visited. Families were holding a meeting at the time. “It was after that that other reporters were barred from going to the school,” she said.

But despite the Chinese officials’ preference for tightly controlled media, it was precisely the unrestrained access reporters had that brought in an unprecedented sum of donations to the relief effort from all over the world. The American Red Cross alone has received US$34 million thus far in donations marked for the crisis, $20 million of which has already gone to China for the relief effort.

“It’s the largest number I’ve seen,” said Alex Mahoney, disaster program manager of the Middle East, Europe and Asia for the American Red Cross. “When people can see what is happening on the ground, it makes a huge difference [in donor response].”

Block feels that the human angle they were able to communicate through unrestricted reporting contributed to the response of the American and international community.

“To hear a mother say ‘my son begged me not to go to work that morning, and I left him with his grandparents, and now he’s gone.’ Any woman anywhere on the planet, I don’t care where she is, would completely relate to that on just a visceral level. I know it affected people and I’m sure that trickled down to whether people were giving to relief organizations,” she said.

But for the relief effort, there is still a long way to go. Currently, approximately 15 million people have been displaced and five million are homeless, according to Mahoney. The Red Cross estimates that US$92.7 million will be needed over the next three years for their role in the recovery process, and about 65% has been covered so far through donations and pledges. The funds are intended to go to the Red Cross Society of China, who will then use the money for the support of approximately 500,000 people, according to the International Federation of Red Cross and Red Crescent Societies. Overall, the recovery effort will cost billions.

And as rebuilding begins, reporting lessens. This reflects the governmental crackdown, but also the changing state of things.

“I think now they’re entering a period of what will be stasis for some time,” Block said.  “There will be people in huge displaced persons camps for a long time while they figure out how to rebuild and what will be rebuilt, where it will be.”

Chelsea Mason is a graduate student in East Asian studies at the University of Southern California. She is also Co-Managing Editor of US-China Today.