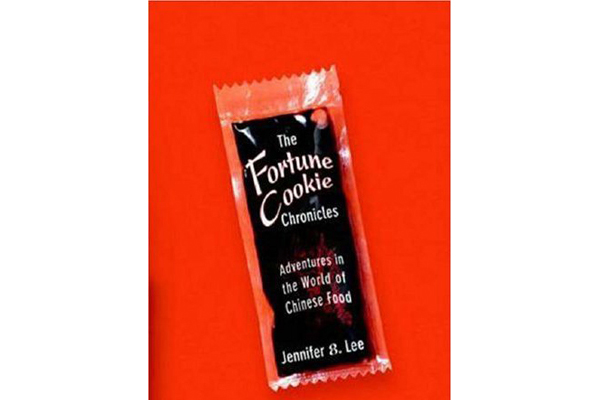 Jennifer 8. Lee gives in to her obsession with Chinese food and produces a fun and memorable look at Chinese food as a global cuisine.

Then ask them how often they eat Chinese food.

In her first book The Fortune Cookie Chronicles, New York Times staff writer Jennifer 8. Lee (yes, “8”—it stands for prosperity in China) aims to go behind the scenes of the average Chinese restaurant—way behind the scenes. The book is staggering in its scope, examining competing tales on the origin of the fortune cookie and then offering her authoritative version, the trials of Chinese immigrants, the travesty of fake soy sauce, and ultimately, the greatest Chinese restaurant in the world.

To answer her many questions, Lee traveled all over the world to find Chinese stories and food in both likely and very unlikely places. She opens with her search to find the origin of the fortune cookie, which, to her horror, is most definitely not Chinese. Lee also sets out to discover the origins of General Tso’s chicken, a dish that originated in the U.S., and travels to General Tso’s birthplace in search of answers.

But the highlight of this book is Lee’s search for the greatest Chinese restaurant in the world—outside of predominately Chinese societies, of course. This takes her not only to the usual North American Chinatowns, but also to Lima, Peru; Dubai; Brazil; Mumbai, India; and even a tiny island off the coast of Madagascar, Mauritius. In sampling both authentic Chinese food as well as local adaptations (such as the chow mein sandwich) at both high-end and hole-in-the-wall restaurants, Lee confronts the idea of authenticity.

“We’d like to think… that we serve authentic American-style Chinese cuisine,” said the owner of a restaurant in Korea. This statement turns the whole idea of authenticity on its head—how does one determine authenticity? Given the many centuries of commercial and culinary exchange along the silk road and in today’s fusion-friendly climate, perhaps even asking about authenticity is inappropriate. How far back in time do you have to go for “authentic” food—to the great imperial culinary traditions or to 1900s New York? Does “authentic” mean old, or entrenched? These ideas are subtly strung throughout the book, and though a deeper discussion of this concept would have been fascinating, it would have departed from the lighthearted tone of the book and compromised Lee’s seeming intent to have the reader infer rather than digest. Save that part for all the Chinese food you’ll be craving.

But eventually, she does come to a conclusion regarding the restaurants themselves. After dining at top restaurants around the world, Lee settles on an unimposing modern Chinese restaurant on the second floor of a Vancouver strip mall that only offers a set menu. It wasn’t on any “best of” list, it didn’t feature a famed chef, but to Lee, it was a gem. “It manages to uniquely balance a set of circumstances specific to the Chinese experience,” she writes.

While the book stays upbeat throughout, Lee also calls attention to the dark side of the preparation and serving of Chinese food. She tells the stories of a 16-year-old illegal Chinese immigrant who faced death and imprisonment during his two-year journey to the United States on the infamous Golden Venture, Chinese deliverymen in New York who often are attacked or killed for the small amounts of cash and food they carry, and a family whose investment in a Chinese restaurant became its downfall. Lee expertly weaves historical background into these stories, blending facts and statistics with anecdotes.

All of these chapters converge on her general topic, but because of the breadth of the book, they don’t necessarily form a coherent whole—the book can be read in its entirety or by individual chapters without losing the context. Lee’s writing is so enjoyable and the subject so intriguing that readers aren’t troubled by the lack of a unifying narrative.

In researching this book, you had the opportunity to interview people of all walks of life all over the world. Is there one person or experience in particular that sticks with you?

Well, for me it was really critical to see the original fortune cookies that were made in Japan in person, because I had heard about them or seen photos, but to really see firsthand the fact that fortune cookies did exist in Japan prior to them existing in America—and they definitely don’t exist in China—kind of brought it to life for me, because fortune cookies had really been an important part of my childhood. I grew up thinking they were Chinese, and I didn’t learn that they weren’t until I read the Joy Luck Club by Amy Tan when I was 13.  That was such a weird worldview shift, it was like learning I was adopted and that there was no Santa Claus at the same time, because it just shifted what I thought was Chinese.

The scope of your book is impressive, ranging from Chinese immigration to the science of soy sauce to the story of an ancient Chinese general. Is there anything you had to leave out?

There were a couple things I wanted to put in there but didn’t because I couldn’t make it fit. So one thing was the history of the wok stove in America. The modern wok stove was invented here. The wok is from China, but way back when, it was over these more primitive stoves. The stove that you see here with the faucet that’s above and the fact that you can kick it with your knee to turn the stove on and off is something that came out of the San Francisco area. It was the Yick family. And they still actually make these, some of which are actually they sell now in China as a result. But it just didn’t work, so that was kind of sad.

You’ve been maintaining a website for your book, fortunecookiechronicles.com, complete with a blog, for over a year now. What prompted you to do this? What did you want to accomplish?

I was sort of opposed to the idea of book websites being kind of static for sure. I wanted mine to be more organic. I thought this was a very interesting way to experiment with complementing the book. The book was actually all written, but I wanted something that could highlight the video and audio and the images that I had collected over time, because people would want to see that. And in a way, this website allowed me to bring all of this stuff to life.

The writers for fortune cookies figure in the last part of your book, and in interviews you’ve said that you’ve even written some of these yourself. Do you have a favorite fortune?

Yeah, I write my own fortunes. My favorite fortune, or my favorite piece of wisdom, is “happiness equals reality minus expectations”. It’s when expectations exceed reality that you get negative happiness, which is unhappiness. So the key to being happy in life is managing your expectations.

Chelsea Mason is a Master’s student in East Asian Studies at the University of Southern California. She is also Co-Managing Editor of US-China Today.