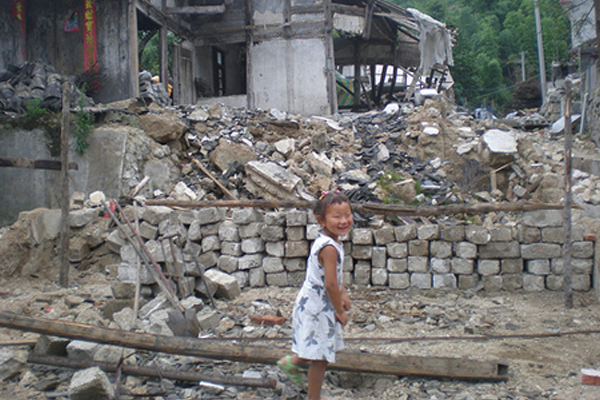 Life After 5/12: A Volunteer’s Experience in Sichuan

A staff member spent part of his summer vacation volunteering in Sichuan after the earthquake and recounts his experience.

This past July, along with a group of church volunteers from across California, I was given the opportunity to travel to the site of the May 12th earthquake in Sichuan. Like many concerned individuals around the world, we were moved by the tremendous destruction wrought by the earthquake and its coverage on television, in the newspapers and on the internet. While the normal course of action for an international disaster involves donating money and hosting fundraising events, we decided to tap into connections we had in Sichuan Province and go there to see and participate in relief efforts ourselves.

Once we landed in Chengdu, we were quickly shuttled off to the center of the city. As we took taxis to our hotel, we were surprised to see car dealerships along the entire route to the city: Volkswagen, Mercedes-Benz, Honda, Hyundai, Toyota, Ford, Hummer and even a Rolls-Royce! The city itself was the picture of metropolitan; tall skyscrapers lined the cityscape, with cafes, restaurants and bars crowding the alleyways. While not as technologically stunning as Shanghai, Chengdu was thoroughly international; luxury brands like Chanel, Louis Vuitton and Gucci had all opened official stores in the city.

If we hadn’t known better, we would have never guessed that a magnitude 7.8 earthquake had occurred less than two months ago, only a few hours away.

Things immediately changed once we started heading to the countryside only an hour north outside of Chengdu. We were heading toward the villages that were the most severely affected by the earthquake. Thousands of blue tents serving as temporary housing for displaced victims lined the road, supposedly to be replaced by permanent government-built aluminum tract houses by the beginning of November. The wide, multi-laned highways themselves were covered in cracks and hard to navigate in our “bread cars” (compact minivans, given the nickname due to their resemblance to loaves of bread), let alone in a normal-sized vehicle. Over the streets, tied between still-standing powerlines, was a never-ending progression of red banners with bold slogans urging residents to trust the government and to work hard to rebuild their homes. 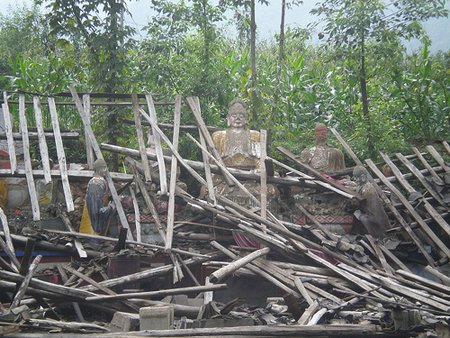 Not even temples were spared in the earthquake. Photo by Marc Liu

We arrived at Tumen, a small village in Shuanglong County, an hour away from the hard-hit city of Mianyang. Tumen was the site of a volunteer-run medical clinic, where residents from Tumen and neighboring villages would come to receive check-ups and immunization shots as well as medication like aspirin and antibiotics. It soon became apparent that there was hardly a building standing. Families had set up tents where houses once stood. As we stopped by various tent-homes, we noticed that the population demographics were relatively consistent, composed of either young children or the elderly. All the young, able adults were in the cities, working to send money back home.

After dropping off some volunteers in Tumen, the caravan of bread cars finally arrived at my destination, a village called Magui, fifteen minutes away from Tumen. Like many other villages, approximately 10% of Magui’s population perished from the earthquake, but things seemed to be looking up for the surviving residents. Rice paddies and corn fields were all around Magui and served as an optimistic sign of potential income. I was assigned to this village along with three other volunteers to assist in the relief work. We spent most of our time here in an abandoned school; all classrooms except for one were roof-less. Before we arrived, students from universities all over China had come to villages like Magui to conduct “tent schools,” where they would teach the children songs and games, as well as help them brush up on basic writing and mathematics while the students awaited reconstruction.

At Magui, as well as in the surrounding villages, there were volunteers helping build wooden frames that would eventually be covered by straw to construct thatched lodges. Since many of these volunteers were college students from the cities, they had very little to no expertise in physical labor. The few remaining able-bodied men in the villages would watch these volunteers work. Then, dissatisfied with their work, they would gruffly shout their disapproval and help direct and demonstrate how to properly tamp earth and lash together roofs. 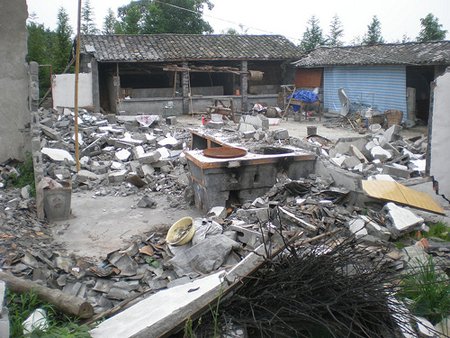 Little remains of many homes in the hard-hit areas. Photo by Marc Liu.

One of these men commented to me that he attended college years ago but eventually dropped out in order to help run the family farm back in the village. As we sat down for lunch, he showed up at the construction site with ice-cold bottles of Sichuan’s most popular brew, Snow Beer. The men would take long swigs from the beer and exclaim, “This is the life!” Whether it was gratification of surviving the earthquake or simply the result of finishing a long day’s work, the village residents nevertheless seemed to be in high spirits.

We first encountered the children of the village as we walked around Magui, finding around twenty of them escaping the intense, 100-plus degree Fahrenheit heat at a nearby watering hole. When we talked to the children, we were surprised to find out that nearly all of them came from different villages. While there were few orphans among them, many of the children were sent away to live with other relatives because of how severely damaged their homes were, even compared to villages like Magui.

Confirming the news stories made infamous over the past months, the children told us that all of their schools had collapsed. Few of their friends had died, however. It seemed as if the children coped with the frightening memories of the earthquake by making light of the subject altogether. They were happy to have an extended summer break, they said.

We would often make daily trips to different families, visiting ten to twenty households each day. Many families had pooled their resources and lived together with other families in order to live more comfortably than they would alone. Many of these impromptu family units consisted, again, of older couples who stayed together because their children or grandchildren were in the cities working.

We encountered one family who had just bought a new washer-dryer, a new television and a new refrigerator to complete the final renovations to their home, only to have everything destroyed by the earthquake. While the elderly couple escaped with their lives, the pain of losing expensive appliances that took years of saving to buy was particularly deep. Insurance is non-existent in these villages, leaving many of the elderly residents in a position from which is hard to recuperate.

While the plight of the villages may seem difficult, we also encountered many who seemed to stand up against overwhelming odds. In our household visits, we met an 85-year-old man who lived by himself in a house separate from the rest of the village. The elderly gentleman had cleaned up the rubble of his collapsed house and built a new one entirely by himself. We asked him how he was able to sustain himself and whether or not he used government-issued rations, which were a little more than a pound of rice and a quart of oil every day. The man shook his head, saying that there were others who needed the rations more than he did. Holding up his two hands, he said that he was doing just fine, and that his two healthy hands were all he needed.

In our daily travels in and out of the major disaster areas, we would contact local drivers who were willing to drive the difficult roads into the remote villages where we worked. Towards the end of our trip, one driver in particular would consistently offer to shuttle us back and forth from the site, only asking for half of the usual rate. On one of these trips, we started a conversation about how many volunteers were coming in from all parts of China, and how this tremendous tragedy has united the Chinese diaspora to help their ancestral homeland.

After a pause in the conversation, he politely asked how old I was. Upon my reply, he said, “That’s not much older than my son. He’s 19.” Wishing to continue the conversation, I congratulated him and asked him whether or not his son was getting ready for work or for college. At this, the driver let out a sad sigh.

“He ran back in to save his friends who were trapped under some tables,” he said. “The school collapsed before he could get out.”

Stunned, I sat in silence, desperately thinking of something to say. Tears started to well in the driver’s eyes.

“I started driving this van because I wanted my son to go to a good high school, so he can apply to a good college,” he sighed. “Now that my son is gone, I don’t have anything left.”

I feebily offered condolences, deciding not to say anything further when I saw he was lost in his thoughts. After bidding him goodbye, I stood watching his van drive away, speechless. In spite of all the optimism I saw in the villages, from both young and old, it only took one conversation from a heartbroken father to remind me of how fresh the wounds still are in the hearts of the earthquake’s victims.

While I encountered many sad, heart-wrenching stories in the disaster area, I came away with a strong impression of the people of Sichuan. In spite of such intense suffering, these men and women somehow managed to find hope in the midst of their circumstances. Whether it was talking to the 85-year-old man who rebuilt his home with his own hands or teaching songs and games to children who did not show any signs of psychological trauma, I left Sichuan in awe at the resilience of the people and how eager they were to follow the decree announced on banners throughout the province:  “Let us work together to rebuild our homes!”

Marc Liu is a senior studying East Asian Languages and Cultures at the University of Southern California.