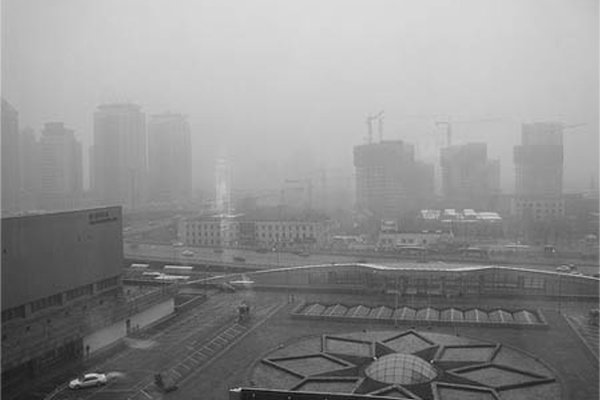 China’s environmental challenges are staggering. New efforts may help improve the state of its air, water and land, but will they be enough?

Desperate for blue skies during the Beijing Olympics, China’s pollution problems were temporarily addressed when it closed factories and reduced the amount of vehicle use. When media attention increased, it seemed Beijing was taking steps to create clear, blue skies. But after the Closing Ceremonies, blue skies gave way to gray once again.

“There were a bunch of temporary measures put on for the Olympics, but the long-term consistent trend toward increasing regulation for environmental pollution didn’t change,” said Deborah Seligsohn, the director of the World Resources Institute’s Climate, Energy and Pollution Program for China.

Today, noxious air engulfs Beijing and several other cities once more. The air pollution index average in December 2008 was 98, way up from the 56 in August during the Games. But this is only one of China’s many environmental troubles.

“{China} is absolutely in crisis mode with respect to water and the loss of biodiversity and desertification,” said Barbara Finamore, China’s program director at the Natural Resource & Defense Council. “It has the worst acid rain in the world… its water problems are probably also the worst in the world, both in terms of water quality and water shortage.”

Indeed, many of China’s environmental problems are immediately pressing. In January 2009, the World Bank released a report calling on China to take steps to avert an impending water crisis. Over 300 million people in China drink polluted water every day, like those in Shangba whose water is tainted with chemicals by upriver mines.

In the past 15 years, China’s economy has grown at a staggering rate and spending has focused on creating 70,000 km of hard infrastructure, including concrete expansion of roads, highways, and tunnels in major cities, as well as thousands of buildings. Because of the growing economy, many say environmental concerns have been overlooked.

“A lot of people say that China is following the path that other countries have followed in their stage development– pollute first, and clean up later,” Finamore said.

Yet recently, China has been slowly elevating environmental protection on its list of priorities. This has been a result of a combination of new government attitudes as well as growing popular awareness among the general population.

“There is a commitment from the central government to really improve their environmental situation,” said Ray Cheung, a senior associate at the World Resources Institute. “About ten years ago, environmental regulations were easily brushed off, but now people are paying attention and recognize they have to deal with it.”

But good intentions only go so far in a country where development is focused in the rich coastal cities and overlooked in the rural inland. “What China needs to do is to make sure that environment improvement effects that are taking effect in coastal areas and that similar efforts are replicated in rural, western underdeveloped areas of China,” said Charlie McElwee, an environmental lawyer in Shanghai for the Squire, Sanders, & Dempsey L.L.P. law firm.

China signed the Kyoto Protocol in 1998 and ratified it in 2002, committing the country to reducing its output of greenhouse gases. The country is also participating in the Asian-Pacific Clean Development and Climate Partnership, announced in 2005, which focuses on creating production standards for energy-intensive industries as well as encouraging cleaner and more efficient energy use. In the meantime, however, China’s rapid growth has caused it to pass the U.S. as the world’s greatest emitter of greenhouse gases.

Government officials are aware of the environmental challenges and currently discussing solutions to pollution control. “The general situation of environmental pollution does not allow us to be optimistic,” said Zhang Lijun, deputy minister of environmental protection, to the China Daily. “The fundamental way to overcome this is to continue to press enterprises to reduce pollution emission through technology and management.”

Governmental investigations demonstrate how officials are no longer exempt from the consequences of unsafe environmental practices. Twelve government officials were fired last November for not regulating arsenic pollution in Yangzonghai Lake. Several government officials, including the deputy head of Bachu County in northwestern Xinjiang Uygur Autonomous Region are being held responsible for deforestation as well.

In recent years, there has also been a growing public awareness of the environmental challenges China faces. Last March, residents of several Fujian fishing towns protested when a chemical company planned to build a plant nearby. The campaign expanded as grassroots activists took notice and coordinated a huge effort which successfully blocked construction. The campaign was covered by the media, which has since covered more and more of these efforts, and has occasionally begun some of its own.


“The media… has played a significant role in revealing the polluters,” Cheung said, “and there is a burgeoning and very vibrant environmental movement that is evolving here in China.”

Last November’s announcement of a massive stimulus plan also presented an opportunity. The US$586 billion plan intends to catalyze economic and global growth through a variety of initiatives. While little goes directly to environmental concerns, some experts are more optimistic than others regarding the environmental potential of the plan.

“A lot of pieces of the financial package actually invest in things that are good for mitigation themselves,” Seligsohn said. “Things like long-distant rail improvements and electric power grid infrastructure feed into industrial restructuring toward less carbon intensive industries. Investments and things like rural health care, rural welfare, and rural education. All those kinds of things are good for decarbonizing the economy.”

The money will be spent over a two-year span, 2009-2010, in efforts to boost the economy. Some of these funds are allocated directly to environmental concerns, with about 350 billion yuan (over US$51 billion) announced for the first round of spending at the end of 2008 alone, though details have not been released. Other projects receiving funds are intended to improve infrastructure, leading to improved efficiency in many areas, though there are concerns that this will facilitate driving rather than public transportation.

Finamore also discussed the importance of energy-efficiency and a direct way to implement it regarding housing. “They’ve got 280 billion yuan for housing projects. But how are they going to build these houses? It’s actually a tremendous opportunity to build them, again in a way, that minimizes energy use also under green-building principles, minimize the use of toxic chemicals and paints and carpeting, minimizes use of water.”

What’s more, environmentally-friendly development is not only an opportunity for the environment, but for job creation as well. “Studies come out to show that clean energy is a lot more labor intensive than fuel-development,” Finamore said.

Even before the stimulus, there were signs that China is moving toward environmentally-friendly development. Last year’s “circular economy” law, intended to improve resource efficiency, was warmly welcomed by environmentalists.

“It’s aimed at developing an economic system where what might normally be considered waste products from one industry are used as inputs for another industry,” Finamore said.  “The goal is to reach a point where you don’t have to have these end-of-pipe expensive pollution control equipment, to actually design your factories so that they use less water, use less energy, come up with less waste in the first place that needs to be managed.”

Several other projects either planned or in progress also bode well for environmental progress. Government projects include hydroelectric plants in several locations and regional initiatives like the joint project between Jiangsu province and California on electricity demand, as well as the National Development and Reform Commission’s promotion of rapid bus transit and investment in rural water treatment.

Non-governmental organizations are also making their mark, both international and domestic. Current projects include the China Environmental Health Project’s search for technological solutions to China’s air and water problems. But NGOs can clash with the government, limiting their effectiveness.

Current NGO projects are regulated by the government, causing problems for some organizations seeking to further an environmental agenda in China. Pang Sze Cheung, the interim communications director of Greenpeace, has had issues with the government in the past regarding his agriculture campaign.

“Officials would call in the morning saying you got to cancel that press conference or else Greenpeace would be censored in the Chinese media,” he said.

The bureaucracy of China’s government has also created a gap between policy and enforcement. “A lot of the rules and regulations are supposed to be enforced at the local level,” Cheung said, “but the local environmental bureaus are funded directly by the local governments, who have an incentive to stay more focused on economic growth.” Because business is more immediately profitable for local governments, priorities often lie there instead of with long-term projects.

While the Ministry of Environmental Protection has set up several field offices directly managed by the Ministry rather than by local governments, “the problem is that the lower level and at the bureaucratic and administrative levels there’s just not the capacity to enforce the new initiatives,” Cheung added. Because lower level offices are understaffed, there just aren’t enough people to enforce regulations.

Though progress in solving long-term environmental problems is likely to be slow, there is still optimism.

“In China, if there’s a will, there’s a sense, there’s a desire, then things can happen,” said Cheung. “But by no means will it be a simple task.”

Michelle Thompson is a graduate of the University of California, Los Angeles.