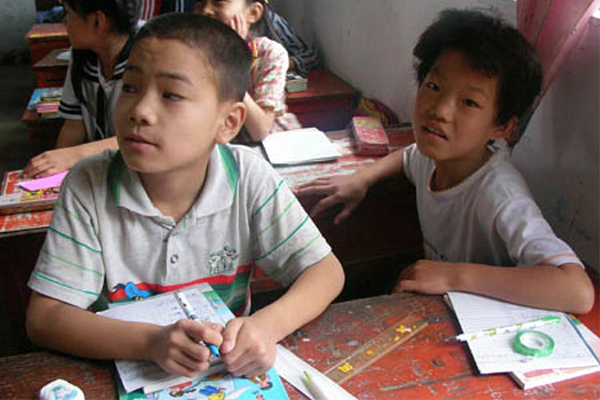 Neglect and Discrimination are Often the Fate of Migrant Children

As China’s government struggles to reform its broken hukou system, millions of migrant children suffer the consequences of the anachronistic laws.

The tall tower crane extends to face the sky, the song begins, and it is possible because of them, the migrant workers. They are farmers who have left the countryside and traveled long distances and whose labors are building China’s cities. The song, named ‘nongmin gong’–the Chinese term for migrant workers–was written two years ago to praise the workers and spotlight their contributions; a music video quickly followed. Missing from it, however, are scenes of the sacrifices they have had to make and of the cost borne by their children.

One of the few children who appears in the video is being cared for by a nanny who is a migrant worker. The absence of the children of migrant workers is unintentionally symbolic.


Skyscrapers, symbols of China’s rise, multiply by the day. They rise and factories hum only because of the sweat and sacrifice of migrant workers from the countryside. More than 130 million have moved to urban areas in recent years. They arrive, clamoring for work in factories and on construction sites, usually making more money than is available back in their villages. Even so, leaving home was difficult for many of these migrants, especially for those with children.

Sometimes leaving their children is the only sensible choice available to migrant workers.  According to a study by an All-China Women’s Federation research team in 2008, this is the fate of an estimated 58 million children who stay behind, usually in the care of relatives.

“For children left behind, there are long periods of separation between children and their parents and those children will not be able to get enough attention from their parents, which is critical for their development,” said Yao Lu, a Columbia University sociologist.

Children who accompany their parents, though, sometimes suffer neglect as well. In addition, they often confront social discrimination and denial of basic benefits. Still, many parents have no one in their villages to leave children with or are committed to building a new urban life for their families. And so they bring their children along; families now constitute about 25% of the entire migrant population. In a 2005 survey, one-third of such families said they planned to stay in the cities.

“Most children prefer to go with their parents into the cities,” said Qiaobing Wu, a doctoral candidate in social work at the University of Southern California. Wu surveyed 815 Chinese migrant children in 14 Shanghai schools in 2008. Both parents and children, she said, “believe there are more opportunities for them.”

The children migrants bring with them to the cities, however, often fare no better than the children left behind in rural areas.

Wu said the migrant children she studied showed hostility towards society, the city itself and other people. They also exhibited lower life satisfaction and more depression symptoms than local children.

Like the children left behind, children brought into the cities still have limited contact with their parents. Parents may leave for work before children are awake for school and come home after children are already asleep; these are Chinese latchkey kids.

Migrant children are often unable to assimilate and interact with local children; according to a China Labour Bulletin survey, 50 percent of migrant students in Guangdong province said they played only with other migrant children. A 2006 study by the China Youth Research Centre found that 63% of local urban children participated in extracurricular activities compared to just 34% of migrant children.

These are not the only social issues these students have to worry about. Though there are more educational and economic opportunities in urban areas, migrant children are often limited by China’s hukou (household registration) system.

The system, in which every individual in China is linked to a particular household and location, allows the state to control the movement of people as well as regulate access to resources such as healthcare and education. The hukou system institutionalizes different treatment of people depending on their place of birth and the status of their parents. Those from the countryside are essentially second-class citizens.

“For migrant children, our lives and circumstances can’t compare to those of Shanghai children,” Liu Ming, a Shanghai migrant child, told a Xinhua News Agencyreporter in 2006. “They eat better than us; they live in buildings with multiple rooms; they go to proper schools.

This discrimination against migrant children is most evident in education. The U.S.-based group Human Rights in China estimates there are 1.8 million migrant children between six and 14 years old who are not going to school at all, even though education is mandatory for all Chinese children through grade 9. These numbers, however, are based on incomplete statistics and the organization says the real figures could be much higher.

Migrant children in the cities do not qualify to attend public schools on the same basis as children whose parents are registered there. In some places there are schools set up specifically for migrant children, but many say they lack resources and provide subpar education services.

“[The schools] are unable to get the local funding to set up the facilities and there are poor quality teachers,” Columbia’s Lu said. “Most of the teachers are migrant workers themselves or community volunteers.”

Geoffrey Crothall of China Labour Bulletin agrees, “The teaching staff is often unqualified…there’s a high staff turnover.” Beyond that, the facilities are a problem. “Very often, the buildings themselves are converted factories or warehouses,” Crothall notes. “[They are] very poor quality buildings that aren’t structurally safe.

In a report, Human Rights in China said one reason for the lack of adequate schooling and facilities is that “local authorities want to deter migrants with families from settling in the cities where they work.” In some instances, migrant children are technically allowed to attend the public schools, but are effectively kept out by unaffordable fees.

“Schools will be open to all children under one condition: that you have to pay a certain amount of fees, and these fees are creating barriers,” Lu said. “Most of the migrants are living in poverty relative to urban residents.”

Even when migrant children are able to afford to attend urban public schools, experts say they are often segregated from other children and suffer from other kinds of discrimination.

“There is opposition from local parents who don’t want their children to be in the same classes as migrant children because they think their class level will affect the quality of their children’s education,” Crothall said. “They are looked down upon by urban kids.

“Bullying is a big problem. There are a wide range of social problems and juvenile delinquency is quite a serious problem among urban migrant kids who are living in the cities.”

As a result, many migrant children face serious adjustment issues.

“These children have difficulties adapting to the urban environment because they are marginalized in the schools and the city,” Wu said.

Chinese society’s best opportunities are generally reserved for those with college educations. Even if migrant students make it through high school, they are usually at a disadvantage compared to their urban native peers. The exam is notoriously difficult and migrants must take it where they are registered, not where they reside.

“So even if [migrant] children are able to take it,” Lu says, “they would [first] have to go back to where they originally came from.”

This means that migrant parents and children have to invest time and money returning to their rural homes so that children may take the exam.

More than 8,000 students, for example, returned from cities to take the local exam in Fuyang, a city in Anhui province, according to the Fuyang Education Bureau. Most migrant workers’ children said they found it hard to catch up with their counterparts in the same grade because of the poor education offered in migrant workers’ schools.

Education, though difficult to obtain, is the only way most of these children can escape a low-wage future.

“They come to the city for education and they want to find a way to stay in the city through education,” Wu said.

It may be easier said than done, however; the bottom range in acceptable test scores for Beijing colleges is lower for Beijing’s formal residents (those with “Beijing hukou”) than it is for migrant children. Local education institutions favor their own residents over those from other cities. Many diplomas from migrant student schools are also not recognized by universities because the schools are unlicensed.

The government says it is aware of these problems and is taking measures to combat them.

China’s Ministry of Education created policies in 1998 to address the disparities and social problems for migrant children. This includes extending healthcare and opening public schools to the children. The rates of implementation have ranged widely from city to city, however, and the policies have not been implemented nationwide. In 2007, the ministry made promises to correct all of the issues within a year. Two years later, experts say numerous problems remain.

Many, however, believe there is a simple if difficult solution. 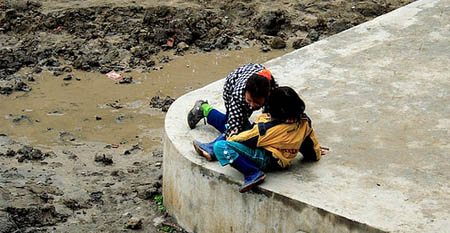 Yet completely abolishing the registration system would also cause more problems. China’s cities are already growing rapidly and some fear that unregulated migration would quickly overtax existing services.

Some officials also worry that allowing equal access to services means that migrant workers and their families will have no reason to return to their villages when urban jobs disappear, as they have by the millions in the current downturn.

With no quick fix in sight, many believe migrant children will continue to suffer.

Human Rights in China advocates a possible solution of making compulsory education available to all school-aged children wherever they reside, regardless of their hukou status. Discrimination against migrant children should also be stopped, they say, by eliminating the discriminatory fees charged for migrant children to attend public urban schools.

Wu said such measures are necessary but changes should also start at home and that more resources should also be dedicated to improving the neighborhoods where migrants congregate, which could, in turn, improve their overall quality of life.

“When you have higher self-esteem, you have better psychosocial status and you can focus more on studies and better academic performance,” she said. “I think there’s a link between mental health and their educational outcomes.”

With the recent downturn in the economy, an estimated 20 million migrant workers have already lost their jobs and millions more may be in jeopardy of doing so. The effect this will have on the millions of migrant children is bound to be harsh.

Most migrant children will continue to be highly vulnerable. Whether they have been left behind or brought into the cities, the opportunities for these children will remain more limited than those children who just happened to be borne to registered urbanites.

Erica Lim is a Master’s candidate in the University of Southern California’s School of Social Work.