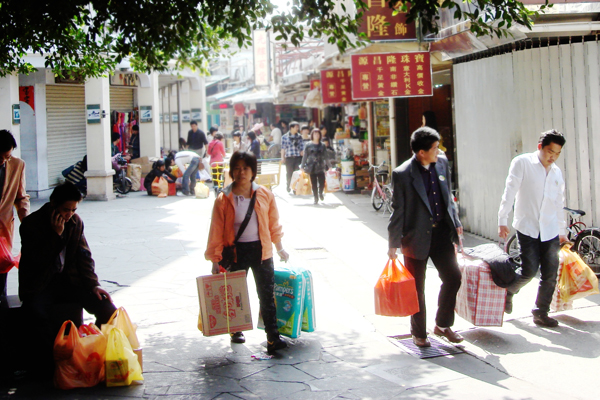 Due to recent price increases in mainland China, more residents of border cities are choosing to purchase daily necessities in Hong Kong.

Every Saturday morning, Sheung Shui, a town on Hong Kong’s border with mainland China, is bustling as if a festival was underway. Families with shopping bags and trolleys pack the streets. Among those pushing through the crowds is Ms. Yang, a petite young woman carrying with a giant red suitcase. (Yang, like the other shoppers interviewed, declined to give her full name.) She looks like a tourist. However, she is actually a resident of Shenzhen just across the border, who comes to Sheung Shui to buy her daily necessities.

“I’ve got myself some shampoo and toothpaste today, as well as some infant formula for my sister’s kid. Whatever others say, I myself still believe that Hong Kong goods are of better quality. Besides, the price level in mainland has been increasing recently, and many of the necessities are even more expensive than that in Hong Kong,” she says, “I come here once every two to three months, and each time I’m here, I buy everything at a large amount – since this is the most efficient way to save money.”

Yang is hardly unique. In fact, with inflation skyrocketing in China, more and more people are crossing the border seeking bargains in Hong Kong. In February, the Consumer Price Index (CPI) of China went up by 4.9 percent compared with the same month last year, according to National Bureau of Statistics of China.

In his annual speech to the Chinese NPC in March, Premier Wen Jiabao acknowledged the problem, saying, “Recently, prices have risen fairly quickly and inflation expectations have increased, this problem concerns the people’s well-being, bears on overall interests and affects social stability. We must, therefore, make it our top priority in macroeconomic control to keep overall price levels stable.”

Among the most popular products in Sheung Shui are milk powder, tissue, shampoo, toothpaste, and soy sauce, many sold in so-called ‘pharmacies’, which are really more supermarkets than drug stores.

In addition to various kinds of western and traditional Chinese medicines, these stores are packed with consumer goods. Shopkeepers say they are supplying these goods because of the great demand among buyers from the mainland.

“There have always been many customers from Shenzhen, as they think the quality of products here is guaranteed,” says one shopkeeper, “Nowadays, due to the appreciation of RMB, price level in Hong Kong becomes lower than that of Shenzhen. That explains the recent increase in the amount of Shenzhen buyers.”

Infant formula is undoubtedly the most popular of all the products. The melamine milk powder scandal which rocked the mainland last year has driven many parents to buy foreign-made infant formula. With the amount of imported infant formula limited in the mainland, however, and prices relatively high, many Chinese flood into Hong Kong looking for formula. So great is the demand that many stores post signs reading that “all customers are limited to purchase no more than three import baby formula”. 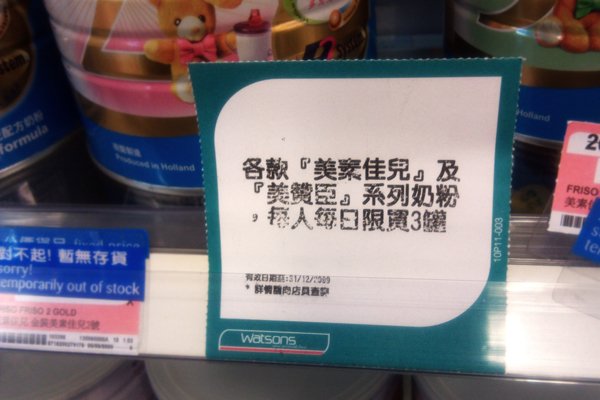 A Hong Kong store sign “Customers are limited to purchase no more than 3 imported baby formulas of Mead-Johnson and Friso.”

Buyers are flocking to Hong Kong not only from nearby Shenzhen. Some come from as far as Guangzhou 90 miles away. Mr. Zhong, a Guangzhou businessman, says he always shops in Sheung Shui to buy some household goods each time he visit the territory.

“Things are more and more expansive now, and I can even feel my money is losing its value,” Zhong says.

The demands for products in Hong Kong have produced something of a boom in Zhong Ying Street, a cross-border trading market. 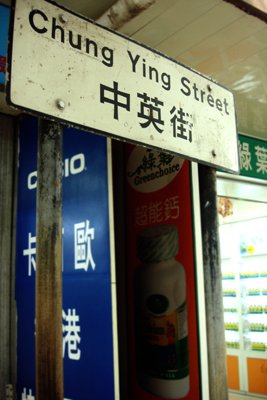 The Hong Kong side of Zhong Ying Street

As indicated by its name, Zhong Ying Street (Chinese-British Street) actually straddles the border of Hong Kong, a former British colony, and mainland China. One side of the street belongs to the mainland’s Shenzhen, while stores on the other side sell goods from Hong Kong. Since it only costs 10 Yuan per time for permanent Shenzhen residents to enter the street, it has become an alternative for purchasing Hong Kong products. According to Shenzhen Economic Daily, over 2,000 people shop in Zhong Ying Street each day.

“You must take your EEP (Exit-Entry Permit for Travelling to and from Hong Kong and Macau) in order to do shopping in Hong Kong, and it costs you 40 HKD for simply travelling between the custom to Sheung Shui. Therefore, I would rather come to Zhong Ying Street for daily necessities. It’s much more convenient,” says Mr. Wang, a permanent resident of Shenzhen.

Ms. Su was shocked by the price on her fist visit to Zhong Ying Street.

“It costs only 49 Yuan to get a shampoo, while the price is as high as 69 Yuan in Walmart in Shenzhen!” she says.

As a non-permanent Shenzhen resident, Su has to pay 50 Yuan for single entrance to the street, but the total value of goods she is able to purchase is 3000 Yuan, “I will definitely come here for daily necessities in the future!” she says. 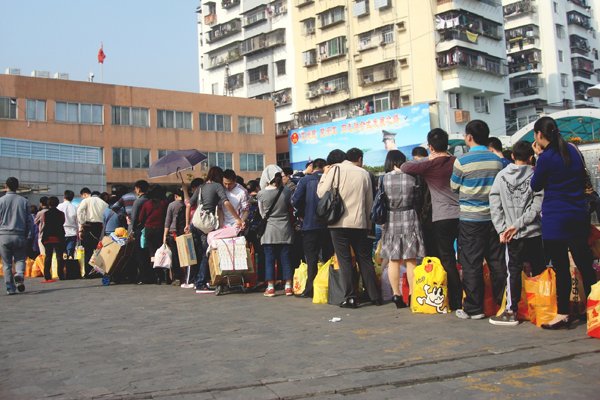 More than 2,000 people a day come to Zhong Ying Street, according to a Shenzhen newspaper.  Most visit to buy cheaper Hong Kong household goods.

Not only has the price difference led mainlanders to Zhong Ying Street to buy their own daily necessities, it has also sparked a booming resale business in China.

Zhang Yanjun and her husband are among those Chinese making their living this way. Everyday, Zhang purchases goods from Hong Kong stores on Zhong Ying Street, and asks non-permanent-resident visitors to take them through Chinese customs, where her husband meets them and collects the products on the other side. Though tiring, it is quite profitable.

“In most cases, I can earn several hundred Yuan by simply doing this,” says Zhang. 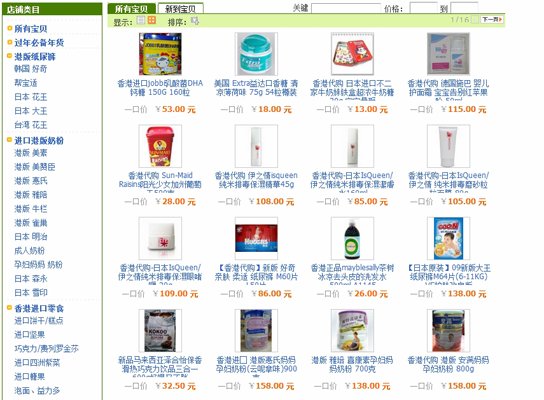 You can find almost everything selling in Mr. and Mrs. Zhang’s online shop. Such as diapers, baby formula, snacks, coffee and make-up.

“People from cities other than Shenzhen also favor Hong Kong goods, and these are my target consumers. Since the goods in my store are genuine Hong Kong products, my shop has already gained some credit among buyers.”

Even though this practice is widespread, analysts believe it is unlikely to have a long-term economic impact.

“This is something natural and it is not going to have a serious effect on either Shenzhen or Hong Kong,” says Barick Chung, an economics professor at the Chinese University of Hong Kong.

“The trade between Shenzhen and Hong Kong is only a small part of the market in both regions, even more small when it comes to the market of the whole China,” Chung notes. “Besides, the government is taking measures like raising interest rate and appreciating RMB so we will wait and see how the inflation works out.” 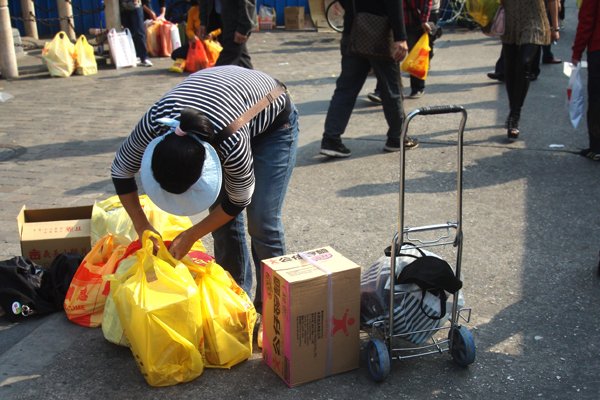 One of the many mainlanders buy goods in Hong Kong for resale in China.

In the meantime, the stores in Sheung Shui and Zhong Ying Street remain packed with price-conscious mainland shoppers.

Eunhye Sin, Su Zhan, and Vicky Zhao are students in the Journalism Program at the Chinese University of Hong Kong.