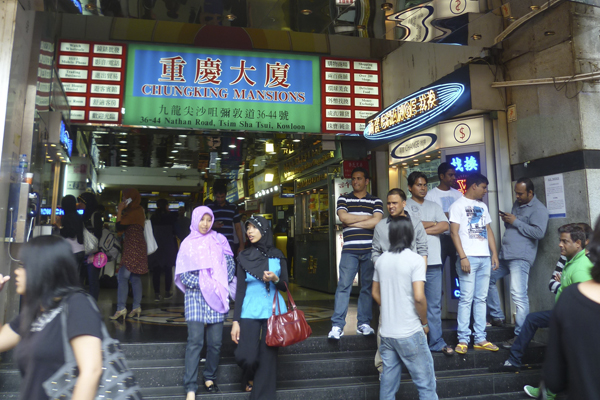 The Chungking Mansions has improved its image to serve as a chaotic cultural center of Hong Kong. And it’s not going anywhere anytime soon.

Once inside, African and Pakistani traders offer their ‘imported’ cell phones at discount prices. The sharp odor of cooking fat hangs in the air as money changers offer rates that can differ by more than 50 cents. In winding corridors that leads to a liquor store selling shots of whiskey at HK$5, a few dodgy characters may emerge from the shadows offering drugs. A woman dressed in a mini-skirt may offer a whisper of “how much?” as she strolls down the hall.

Despite its sleazy reputation, the Lonely Planet guides features Chungking Mansions as 17th out of the 1010 things to do in Hong Kong, and lists it as second out of the 157 architectural and cultural sites in Asia. 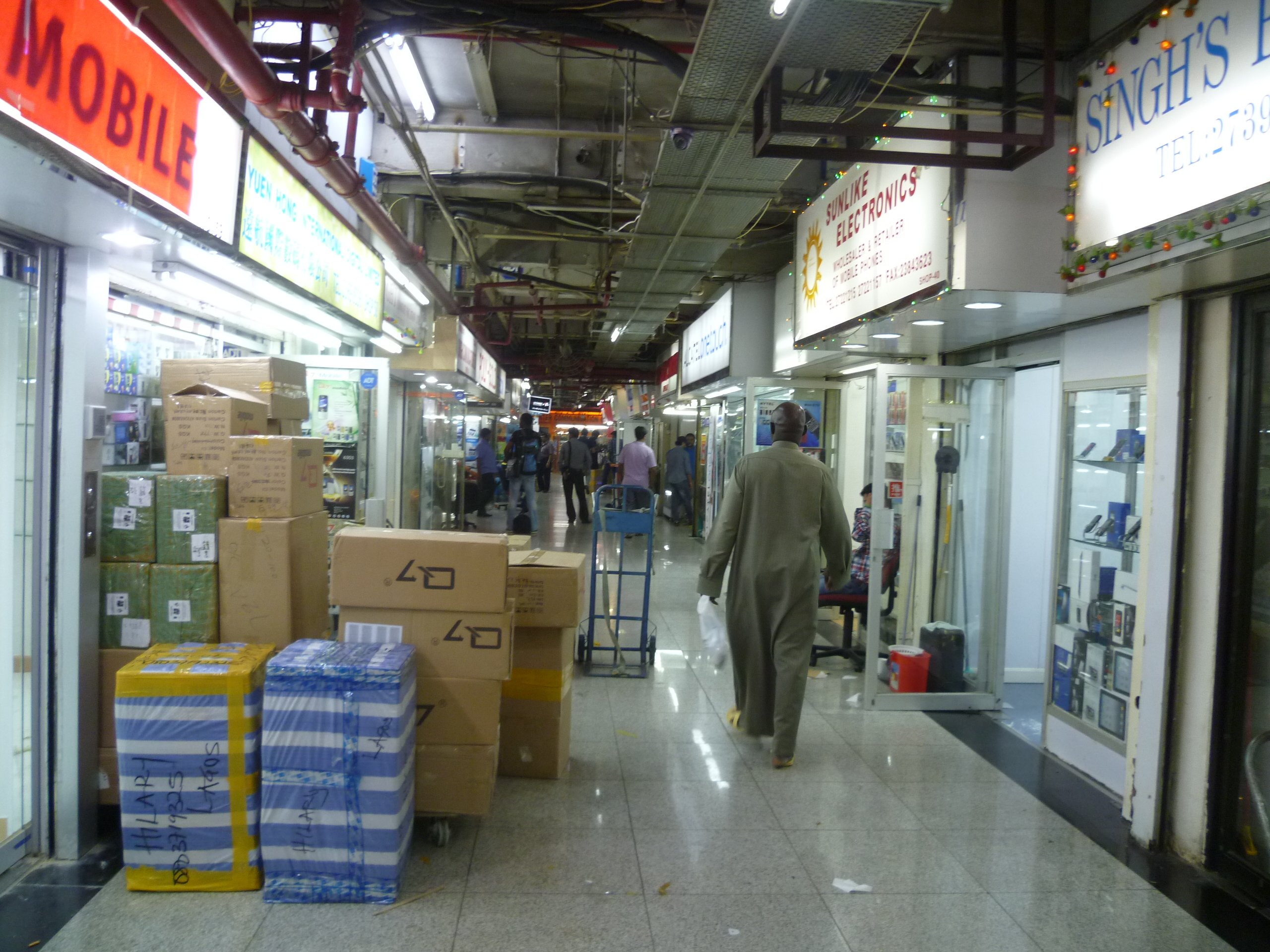 Mobile phones stores can be seen everywhere at the parade.

“There are places like this all over the world, like in Los Angeles, where traders of Mexico come in and buy clothing and things and carry them back to Mexico city and other places,” explains Gordon Mathews, an anthropology professor at the Chinese University of Hong Kong who has made the study of Chungking Mansions his central area of research. “But Chungking Mansions is unique because it is all in one building. Hong Kong real estate is so expensive that all of this takes place in one very small place.”

He says there are four major groups of people in the building –traders, owners and managers, asylum seekers and tourists.

Among traders, the dominant nationality is African, most of whom come and leave every year. Chinese own an estimated 70 percent of shops, guest houses, and restaurants, but most have withdrawn from management and only appear to pick up rental checks. Instead, the place is largely run by South Asians and Africans. Chungking Mansions is also a haven for asylum seekers and back-packers. Approximately several hundred asylum seekers find shelter at Chungking Mansions. Inspired by, Lonely Planet’s recommendation for cheap guestrooms priced between HK$100 to HK$250 (US$13 to US $32), tourists arrive regularly. 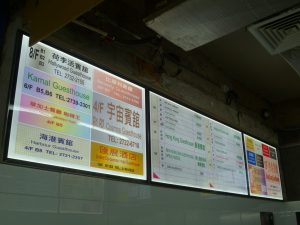 Many tourists are heading here for cheap guesthouses.

The four groups of people from different nationalities create what Professor Mathews has described as “Low-end globalization” at the Chungking Mansions. A Japanese tourist once described entering the building as “walking into a cultural chaos.”

Interesting rhythms emerge. When a bus arrives, the South Asians rush forward, trying to lure tourists to their guesthouses. With an estimated 50 percent of the properties on the first and ground floor owned by devout Muslims, shops on those two floors are regularly shut throughout the day for prayers. A different rhythm is evident at night, when Chungking Mansions showcase the ambiguous attitude of the Hong Kong Chinese towards the non-Chinese in the building. Despite their anxiety, the Africans, South Asians and some Hong Kong Chinese timidly venture in for Indian cuisines.

In fact, Hong Kong Chinese who are willing to mingle with the dominant nationalities at Chungking Mansions remain the minority. Most Hong Kong people do not have a good impression of the place. In 1988, a Danish tourist was killed in a fire at Chungking Mansion, and in 1993, the building suffered a ten-day black-out. Fights break out frequently among drunk Africans and South Asians. To many ordinary Hong Kong residents, it is a den of vice.

However, Professor Mathews says much has changed, and Chungking Mansions has become a safe place where he visits every weekend.

“It was more dangerous in the 80s or 90s,” Professor Matthew says, recalling the Pakistani gangs that used to roam the buildings. “But today it’s not dangerous, largely because there is no need for that. Nobody has time to fight because they are busy making money.”

Professor Mathews remembers a Pakistani telling him that he didn’t need to demand protection money because they realize they can make more money selling mobile phones.

“The only illegality you’ve got is some copy phones sold, a number of workers here on tourist permits, some unregistered guesthouses. But I think for typical traders, the last thing in the world is to get police involved in what they do,” says Professor Mathews.

Steve, an African owner and a cultural tour guide at Chungking Mansions, says there is no reason to fear. “You see immigration officers, police officers, and the Hong Kong people queuing for Indian food here. Why would they do that if Chungking Mansions is a dangerous place? We have CCTV everywhere.”

Despite the myth of Chungking Mansions as dangerous, gender difference is the treatment that puts off many tourists and Hong Kong people.

“For females, they might think you are a sex worker, and come up and ask ‘how much?’” said Professor Mathews. “That’s kind of off-putting particularly for Western women.”

He says 90 percent of the mansion’s residents are male, and many of the women there are indeed professional sex workers.

With booming real estate prices and the hunger for hot property in Hong Kong, Chungking Mansions, with its prime location at the heart of the territory’s tourist district, is facing an uncertain future.

“The location of Chungking Mansions is strategic, you can go everywhere with the convenient transport nearby,” says Steve.

Professor Mathews adds, “Companies over the years have been trying to buy it but they haven’t. And I think it is largely because so much money can be made in this building that people resist selling. I don’t think it will be sold anytime soon.”

Owners and asylum workers point out the significance of Chungking Mansions to Hong Kong. African traders there hold more cash in their hands at one time than some have held in their lifetime, and they feel secure doing so under the roof of CK mansions. 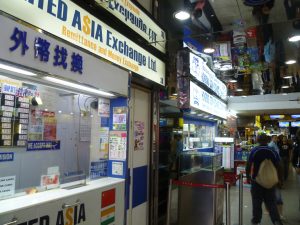 African traders rely on these money exchange shops to do business in cash.

“If Chungking Mansions is gone,” says an asylum seeker. “Hong Kong will collapse.”

Raymond Chan, Jacqueline Choi, and Edith Liu are students in the Journalism Program at the Chinese University of Hong Kong.