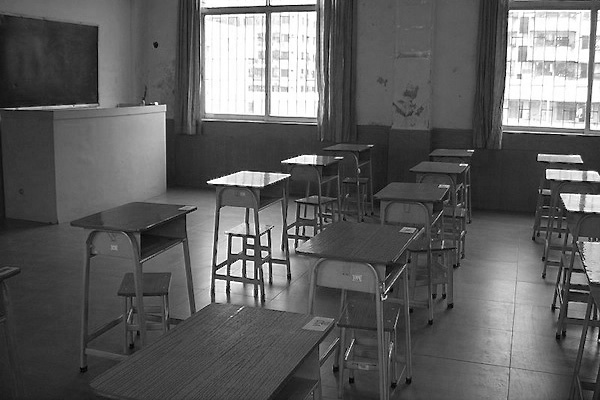 Tanya Wu still remembers the day she took the Gao Kao five years later. Wu woke up at 6:30am to ensure that she would arrive on time for her 9am test. As she looked outside the window, she noticed that the bustling streets of Shanghai were a little different today – regulations limited the number of private cars on the streets to ensure that all students arrive on time to take the test. Such measures seemed reasonable to Wu, considering she devoted a year of school taking daily mock exams in class.

“I think overcoming my nervousness was the hardest thing,” recalls Wu. “The Gao Kao was all I had to get into a university.”

In 2010, 3.13 million college hopefuls were outright rejected from attending a university in China. Only 6.57 million spots are open each year, and acceptance is largely based on the Gao Kao exam. The three-day examination tests compulsory sections on Chinese, math and a foreign language. The rest of the test includes topics in science and humanities based on the student’s academic focus. While small details vary among different provinces, such as the number of questions on the test, the Ministry of Education sets the basic logistics such as dates and the overall outline.

The Gao Kao system was adopted in 1952 by the newly assembled People’s Republic of China. The test did not become prominent until it was reinstated in 1977 following the Cultural Revolution. China had previously used both the Gao Kao and a western-style of admission with less focus on a single test. The Chinese people embraced the Gao Kao system however, as they saw the standardized test as moving them away from the chaos of the previous years. The test replaced individual applications and has a minimal fee, making it universally affordable. Many applicants believed a single test for admission made education more accessible, and not only to those with wealth or favorable political backgrounds.

“The exam system is the one level playing field most [students] will ever see in their lives, and that’s why they really value it,” said Vanessa Fong, author of Only Hope: Coming of Age Under China’s One Child-Policy on PBS. “It is a place where the children of poor farmers and the children of high officials can compete on a level playing field without anyone even knowing their name.”

60% of the country’s population reside in urban areas and typically earn three times more than the rural population according to the United Nations. The Gao Kao, besides requiring a small fee, eliminates the fear of paying for college applications for the poor, which is why those living in poverty are more likely to support the Gao Kao system.

Many of the same problems, such as inequity and unnecessary stress for students, continue to persist. Doubt is strong as to whether the test remains an unsoiled golden ticket to the more equitable life it promises. This has led scholars and students to question the Gao Kao as the sole determinant for college admission.

“Different types and levels of higher education institutions have different requirements on their students, but they could not pick out the right students they want just according to their performance of the exam. In other words, it is hardly possible for the national College Entrance Exam (CEE) to do a flexible and personal assessment,” said Ruoling Zheng, an education expert from Xiamen University, in her essay “Chinese College Entrance Examination: Problem and Reform.”

With application rates at record highs, students are experiencing that the Gao Kao is no longer the only way to gain admission to higher education. It is becoming not only more accessible, but also more popular for Chinese parents to send their children to study abroad. According to the Chinese Ministry of Education, the number of students studying abroad since 2000 account for more than 70% of the total number of Chinese students who have studied abroad in the last two decades. The western method of college admission differs greatly from China and the Gao Kao, leading students to challenge the preexisting system of applying.

Another issue is that the applicant is only scored against other applicants in his or her province, as opposed to competing against students from all over the country. If a university selected the top 10 test takers from each province, the results would not reflect if one province had significantly higher test scores than another province. Also, some universities are given the option to pick a greater number of applicants from certain places such as Beijing, giving those living in large cities an advantage.

“I had studied really hard and after I got my Gao Kao score back, I had tested well enough to qualify me to apply to the first-level universities, which are the top universities,” said USC student Amy Yu Zheng, “however, the universities I applied for would only take 10 students from my home province Chengdu, and because I scored 10 points lower than those students, I could only attend a second-level university.”

Because the Gao Kao is the primary determinant of one’s future college in China, extreme hype and pressure are centered around the test, even to the point where many see the exam as consuming their lives.

“I have a niece who attended high school in China and when she was in school, she did not get home until eight p.m. Even after that, she would stay up until one in the morning to do homework, and then get up again at six to get ready for school,” states Justine Su, Professor of Educational Leadership and Policy Studies at California State University Northridge. “Schools are even known to call students back during the summer so that they can give them a preview of what is coming up in the school year so that they can be better prepared for the exam.”

Some students have been known to hook themselves to oxygen containers in hospitals while studying in hopes of boosting concentration according to the New York Times. Certain provinces order Internet cafes to close down until exam dates have passed. Many girls will even resort to taking contraceptives so they do not get their period during the exam.

The Kao Gao has even begun affecting the breadth of education, as more and more high schools have changed curriculums to help students excel on the test. Many high schools’ reputations are affected by how many of their students are accepted into the most prominent universities. “I remember taking mock exams in class all the time,” Zheng explained, “students can feel almost depressed if they do not perform well on a test. There’s a saying that ‘If you don’t take the Gao Kao, you are not an adult.’”

Even with these shortcomings no alternative has been proposed that can address China’s education problems stemming from its massive population. Although the effectiveness of the Gao Kao system is disputed in terms of attracting well-rounded individuals, Western styles of admissions could elicit bribery and unfair advantages for privileged applicants.

“[It is] difficult to examine one’s morality or other special abilities,” says Professor Zheng. “Those successful experiences of assessing student’s morality or other abilities through recommendation letters or other documents in America or Europe, seldom work well in China, because of dishonesty, corruption or relationship network, which are under the bad influence of our traditional culture.”

Though flaws remain with the Gao Kao, reforms in the education system are being made – but at a slower success rate than desired.

“More universities are experimenting with their own evaluation system,” notes Chen Zhunmin, director of the Consulate General’s education division at the Chinese Consulate in Los Angeles. “For example, about 100 top universities in China have a 5% quota. If they enroll 1,000 each year, 5% means 50 students can be selected through unconventional means. The Gao Kao would be one of the criteria, and then they could ask them to write a person essay, take additional tests, which would be more subjective and not so standardized.”

Changes in societal thinking have reduced the importance of receiving a college diploma because of growing alternative routes to success. Stories involving young business entrepreneurs who managed to become wealthy without a degree serves as a contrast to the importance put on the Gao Kao.

“Many Chinese families own successful private businesses,” says Su, “therefore, the children of those families can enter the family business and earn money without a good college degree.”

Despite the criticisms, the Gao Kao has withstood the test of time and addresses issues stemming from China’s large population and uneven income distribution. The Gao Kao arguably creates the fairest playing field for Chinese students.

“I anticipate the Chinese government will keep trying to close the gap of inequity in the test system. That’s very encouraging because just 20 years ago when I first left China, the issue of equity was not even openly discussed. I think they will definitely continue reforming the exam system to fit the people’s needs,” Su predicts.

Like Su, Chen also remains positive about the future.

“How long would it take to narrow the gap between coastal areas and inland areas? I think at least 10 or 20 years,” Chen states. “How long did it take the U.S.? Half a century? China is doing the same.”

Connie Chen is a junior at the University of Southern California, studying International Relations/Global Business.