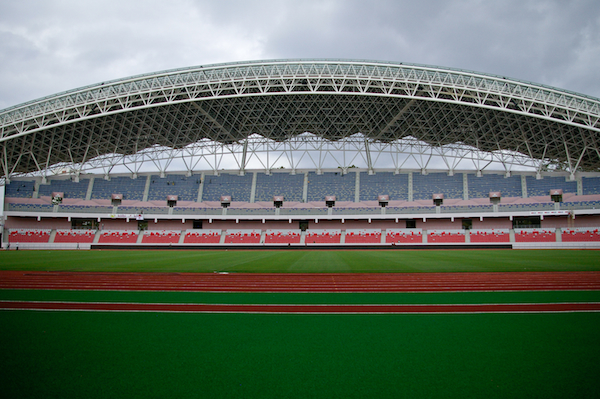 China’s practice of donating and building stadiums in Latin America and Africa functions as part of the country’s foreign aid policy.

“[Tin Jo’s closure] outraged the people of Costa Rica,” explains Manuel Orozco, director of Remittances and Development at the Inter-American Dialogue and a former Costa Rican resident. “It became such a big issue, it almost became political. The Chinese community is quite influential [in Costa Rica].”

According to Orozco, Chinese residents in Costa Rica have become an important political and cultural force in the country. There are now more than 45,000 Chinese living in Costa Rica, the second largest Chinese population in Central America. Only in 2007 did the nation cut diplomatic ties with Taiwan and officially recognize the People’s Republic of China. Following the diplomatic switch China negotiated a free trade agreement with the small country, purchased US$300 million in Costa Rican bonds and set up a Confucius Institute. But the most obvious result of the new relationship? A shiny, new national stadium.

This March, Costa Rica National Stadium opened in the capital city of San Jose at an estimated cost of US$100 million. Displays of cultural pride from both nations marked the opening ceremonies. The Tico Times reports that the 35,000-seat stadium hosts two giant television screens, three levels of seating, office buildings, a small sports museum, a hotel, banquet hall and an extravagant staircase serving as the southern entryway.

“Costa Ricans love the stadium. It is first class and an important place for soccer,” Orozco says. “Almost every weekend there are concerts and events, [the stadium] has really strengthened the relationship.”

China’s stadium diplomacy has been evolving since the country began giving aid to African countries in 1956. Chinese aid focuses on themes of “equality, mutual benefit and no-strings attached” according to a 2011 report on foreign aid published by China’s Information Office of the State Council. This straightforward and economically focused approach to foreign aid has made the Chinese model attractive to many policymakers and average citizens around the world.

Although only a small component of China’s estimated US$25 billion in foreign aid in 2007 went to the building of stadiums, the structures serve as permanent reminders of China’s aid efforts in their respective locations. The diversity of China’s aid projects contrasts with more traditionally Western forms of aid such as tied loans that specify the proper usage of funds or require certain democratic reforms. Disaster relief, while certainly humanitarian in its effort, leaves a more anonymous impression with the target population than a permanant stadium.

Many of the most notable aid projects have followed diplomatic or major economic deals with the PRC. The Chinese government has responded by donating a stadium or offering construction and subsidized loans to support specific nations. The recipients are far from random, and fit the bill of strategically chosen countries throughout Latin America and Africa. China-associated stadiums have popped up in Ghana, Nigeria, Angola, St. Lucia and Grenada, with subsidized infrastructure projects in even more locations.

These resource-rich nations are a benefit to the manufacturing-heavy Chinese economy and provide potential for future political cooperation. While stadiums are only a small component of China’s greater foreign aid policy, the massive, modern structures are a tangible reminder of Chinese assistance for even the most marginal members of society.

Soft power, or “the ability to get what you want through attraction rather than through coercion,” was first christened by Joseph Nye in his 1990 book Bound to Lead: The Changing Nature of American Power. Nye argued that attraction “could be cultivated through relations with allies, economic assistance, and cultural exchanges,” resulting in a positive public opinion abroad.

Along with glittering modern stadiums, China has diverse infrastructure projects throughout the developing world. From the Tan-Zam railway connecting the landlocked Zambia with ports on the Indian Ocean, to hospitals in Cuba, Chinese aid functions without traditional constraints on its donations or definitions of its breadth.

“China wants to develop a renewed policy which is different from older colonial policy from the West,” says Zheng Yongnian, Director of the East Asian Institute at the National University of Singapore. “The West has criticized China as a new style of colonialism in Africa, because China now wants natural resources in order to support its stable economic development.”

“Infrastructure has helped China achieve a lot of economic growth,” Zheng says. “In this sense, China wants to export this experience to other countries.”

Not all teams are rooting for China as accusations of foul play arise in the international arena. The Chinese aid model has drawn much criticism for its blind approach to issues of humanitarian conflict and corruption. There are growing concerns of job displacement for local workers as Chinese construction firms import a portion of their labor force directly from the mainland to staff their projects. Labor conditions where resident workers are hired meet weak safety standards. Even seemingly marginal markets, like chicken sales in open-air markets in Zambia, are the targets of individual Chinese entrepreneurs competing with local enterprise. In June 2010, Luanda General Hospital, a US$8 million project built with Chinese foreign aid by the Chinese Overseas Engineering Group, developed significant cracks in its structure, forcing patients and staff to evacuate.

While these anecdotes do stem from specific examples of conflict involving Chinese projects, Deborah Brautigam, a professor of international development at American University and author of The Dragon’s Gift: The Real Story of China in Africa, says the media has greatly exaggerated these stories.

“There are just a few big exceptions like Angola, Libya and Algeria,” Brautigam says. “In Angola, because of the war, there are huge numbers of illiterate people that are not going to get jobs on construction projects because you can’t hire people who can’t read or write. That’s why in a place like Zambia or Tanzania, they’re [hiring] local people, but in a place like Angola it’s hard to do that.”

Brautigam states that on the high end, 10-20% of workers are brought from China for highly technical jobs such as engineering and managerial positions. Otherwise, it is overwhelmingly local employment.

China’s economic engagement with countries towing a history of humanitarian conflict has also raised eyebrows in the international community, most notably its dealings with the Sudanese government. China is the largest buyer of Sudan’s oil, enabling the country to purchase Chinese arms that have popped up throughout the conflict in Darfur, inadvertently contributing to 200,000 deaths and 2.5 million displaced persons according to Human Rights First.

China did bend to international pressure by sending a diplomatic envoy in April 2007 to urge a peaceful resolution to the Darfur conflict, but the war continued on for another two years. While the effectiveness of trade sanctions is debatable, China never ceased buying oil from Sudan, signing new agreements to strengthen oil and gas trade just this year.

“The Chinese will do what is pragmatic,” Brautigam says. “If there are conflicts that look like they’re going to really affect Chinese interests, like in Libya, then they will try to side more with the international community.”

In the U.S., foreign aid represents less than 1% of the federal budget and is being threatened further by additional cuts. As noted by NPR, the Obama foreign aid program Feed the Future has already experienced damaging cuts. On the flipside, Chinese foreign aid has grown dramatically in recent years from less than US$1 billion in 2002 to more than twenty times that figure as estimated by NYU. The exact numbers behind Chinese aid are difficult to pin down given the diversity of projects and fuzzy definition of what China considers aid, however the figure is increasing.

The immediate future offers no foreseeable slowdown for China’s economic and aid engagement in the developing world. With deep ties fostered through projects like “stadium diplomacy,” China is garnering popularity at the highest levels of government, and with the average person enjoying his or her favorite soccer match.

“I don’t think it has to be a zero-sum game. I think there is room for everybody to engage,” Brautigam says. “If China rises, we have to fall- I think it might be that way in the global economy but I don’t think it has to be that way in engagement in different parts of the world. If you look at public opinion, it doesn’t work like that. It can go up for both and I think that’s what we see for both.”

In the inaugural game played at Costa Rica National stadium, the Chinese tied the hometown team 2-2, a fitting score as both nations have emerged winners in the diplomatic match.