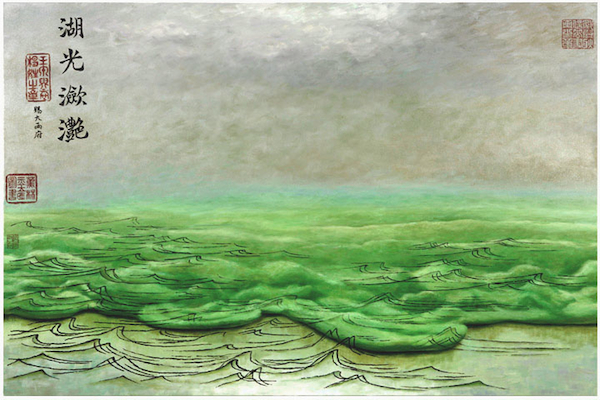 China’s economic development may be limited by the country’s dwindling supply of clean water, a problem exacerbated by overdevelopment, pollution, and a growing population.

The water in Lianggou is poisoned. In the hills of the small Henan village, a sickly yellow run-off seeps into the roots of crops and contaminates wells. Unusually heavy rains have carried the dangerous fluid deep underground, decimating farming yields and livelihoods. Some 200 villagers are without clean drinking water.

Yet, even though it was the chromium processing plant that clearly failed in its duties, it has fallen on the local people to clean up the 250,000 tons of waste now endangering their village. Though officials have stated all waste will be removed by 2012, current plans have been put on hold due to high energy costs.

As the web of urbanization expands across the country, China’s water supply is under increasing stress. Careless industrial dumping practices have contaminated supplies while a growing population drinks up every last drop. The availabilty of clean water in China is now rising to the top of the national agenda. With the potential for economic slowdown an obvious concern, the country’s leadership is struggling to balance the twin demands of development and environmental sustainability.

“Water is something we take for granted in big cities,” says Audrey Chen, a Hunan native. “My family used to describe the river of my hometown as so clean you could drink from it. It had lots of fish. Now, the water is dark and there is so much trash, and the biggest lake in our province is shrinking!”

By 2030, China’s urban population will top one billion people, with eight urban centers becoming “mega-cities” of over 10 million people. While the country possesses less than 7% of the world’s arable land, its agricultural industry exacts a huge toll on the nation’s groundwater supply as more surface sources are diverted to industrial and commercial developments. With the pace of development still at full-speed, the environment may prove the limiting factor to China’s growth.

Thirty kilometers from Beijing, nearly all water flowing in the Juma River was diverted to supply a petrochemical plant outside the capital city, effectively forcing three million farmers and residents in downstream Hebei to turn to groundwater as their primary water source. Such projects contribute to desertification and threaten natural biodiversity.

“China has been using water at an unsustainable pace by depleting [groundwater reserves] that took hundreds of years to develop, and this has significant environmental effects,” explains Siddhartha Oza, a Sustainable Energy Fellow at the Natural Resources Defense Council.

While urban centers consume more and more resources, the country’s agricultural industry still accounts for nearly 70% of the country’s freshwater usage. If agricultural production decreases due to lack of water or rising water costs, it could lead to skyrocketing prices in staples such as grains and lower incomes in already impoverished rural areas.

Mounting environmental degradation only exacerbates the thinning availability of freshwater resources. According to China’s Ministry of Environmental Protection, nearly 60% of the water in China’s seven major rivers was found to be of poor quality. Runoff from fertilizers, pesticides and animal wastewater were found to have significantly increased plant biomass in bodies of water, a development that threatens marine life and fishing production by depleting water oxygen levels.

Ahead of the 2008 Beijing Olympics, groups of volunteers and military personnel scrambled to remove thousands of tons of green algae in the Yellow Sea, the site of the Olympics regatta races. Xinhua recently reported a similar event in July when a “green tide” more than 5,000 square miles bloomed off the coast of Jiangsu. In 2007, the New York Times documented the green blooming of Lake Tai, the primary freshwater source for Shanghai.

“The majority of the cities have not achieved the turning point yet,” Zhang says. “Economic development will result in more pollution emissions in China, especially with foreign firms seeking to locate in areas with weak environmental regulations.”

In 2003, 40% of China’s river stretches were classified as severely polluted.


But with environmental calamities almost routine, the Chinese public is becoming increasingly vocal as the consequences of lax regulation and overdevelopment affect their daily lives. In August, tens of thousands of protesters took to the streets in Dalian calling for the removal of a nearby chemical factory that produced paraxylene, a toxic substance used in the manufacturing of polyester and plastics. When the factory’s protective walls were damaged by typhoon Muifa, protesters swarmed city hall while microblogging services like Weibo lit up with criticism of the government’s lackadaisical concern for public safety.

“I would say as a citizen, that the government can certainly do better,” Chen says. “But I am sure the government is aware of this; it is just not their priority at this stage. So my question is: when will this be the priority? I don’t think we can wait.”

Though human society can be blamed for many of China’s water problems, the country’s natural geography plays a big role. While southern China battles annual monsoons and floods with much of the area receiving more than 60 inches of precipitation each year, the North must cope with an enduring shortage of water, with especially arid lands receiving less than 10 inches of rainfall.

With this excess of water resources in the southern provinces, Chinese leaders are moving forward with a massive plan to quench the water-parched North. The South-North Water Transfer Project will connect four of China’s major rivers – the Yangtze, Yellow, Huaihe, and Haihe – to transfer water to northern cities like Beijing and Tianjin. First considered by Mao Zedong in 1952, the massive infrastructure scheme will not be completed until 2050 and will cost roughly US$62 billion – twice the price of the Three Gorges Dam. The project cost also outweighs China’s total spending on water-related infrastructure since 1990, estimated at US$54 billion by the World Bank.

While Chinese media applauds government efforts to make way for the project, some 345,000 rural residents have already been forced to relocate, often to substandard housing developments in distant areas. The scale of the project, which far exceeds that of the Three Gorges project, will disrupt ecosystems along the waterways along with several significant cultural and historical sites

The project also has international impact. One of the project’s proposals calls for water to be diverted from the Brahmaputra River, a major water source for northern India. The construction of hydroelectric dams on the Chinese side has already drawn the ire of Indian officials.

Still, the need for more water in the North is difficult to ignore. As the BBC reports, nearly 35% of China’s population lives in the northern area along three of the major rivers, yet the area holds only 7% of the country’s water resources.

While the South-North Project offers a grand solution to the country’s water issues, some see hope in smaller proposals.

Tan Cheon Kheong, a research associate at the National University of Singapore’s Institute of Water Policy, points to Shenzhen as a city with exemplary water management techniques..

Near Tianjin, the government is investing heavily in seawater desalination projects. While such projects do offer a long-term solution to China’s water shortage, the cost to produce clean water is still double what it sells for.

Fang proposes a simple economic solution to save water — raise prices. She notes that water is charged at only 62% of its real cost in urban areas and at 30% in rural areas. Raising prices in rural areas, however, is complicated.

Tan points to nearby Singapore as a model for sustainable water usage. The country’s reclaimed water system, NEWater, collects and treats used water while mixing in pure water to pick up lost minerals. Most of the system’s water is supplied back to industrial and commercial customers for direct, immediate use. Before Singapore launched NEWater in 2003, intensive public education campaigns emphasized the high quality of the treated water.

“It was crucial to obtain the public’s buy-in to drinking reclaimed water,” Tan says. “This is an important lesson for countries that wish to produce reclaimed water for human consumption.”

Forces of economic growth and urbanization, if left unchecked, will undoubtedly create more severe water shortages in the near future. As cities, factories, and agricultural industries compete for water resources, ordinary Chinese are left to deal with the resulting environmental impact. But as is the case with much of China’s modern development, the opportunity to transform the situation is within reach.

“Out of any country in the world right now, China may have the most potential for investing in sustainable water infrastructure,” Oza says. “Due to its high rates of urbanization, cities are essentially built from scratch and therefore there is a substantial opportunity to invest in the most essential and permanent infrastructure – water.”

Kimberly Dimicco is a sophomore at the University of Southern California majoring in International Relations and Global Business.