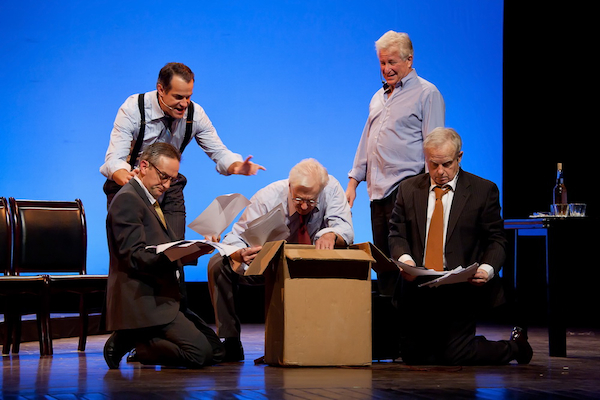 An American play based on the controversial publication of the Pentagon Papers in 1971 takes a 10-day tour through China.

On a November night, a group of forty Chinese students boarded a bus to a theater in mid-city Los Angeles. A tech rehearsal of the play Top Secret: The Battle for the Pentagon Papers commenced for the intimate group, with laughs shared through flubbed lines and pre-show jitters. The evening’s performance and a post-play discussion, led by playwright and University of Southern California professor Geoffrey Cowan, served as a testing ground ahead of a 10-day tour in mainland China, preparing the show’s producers for some of the obstacles that may greet the tour.

“At some parts the lights were out when the actors were talking,” one student voiced. Difficulties were to be expected during this run-through.

“I’m concerned the audiences will spend so much time reading subtitles instead of seeing their actions,” another student said. The fast-paced, English-language play would feature projected subtitles for Mandarin speakers.

“We may have heard of the term ‘First Amendment,’ but we may not know how it affects the press in the U.S.,” one student announced. “For me, that is the most important part to [note] for the Chinese audience.”

Now the discussion was onto something.

The 15-person production, with minimal props and a bare stage, dramatizes the 1971 publication of the Pentagon Papers by the Washington Post and New York Times, a set of secret documents prepared by the U.S. Department of Defense that revealed some of the darker political and military affairs of the Vietnam War. Though logistic concerns populated the evening’s discussion, frank conversations regarding censorship, freedom of the press and the sanctity of national security, shined through.

“[Top Secret is a] triumphant statement about the importance of free speech and free press, we did not want to make it seem like the press should always print things,” Cowan said. “These are universal questions people struggle with in China as well.”

Six days later on November 22 the play kicked-off its tour to a sold-out audience in Shanghai.

The play proved particularly topical for audiences, with more than 8,000 seats filled and packed performances in Shanghai, Beijing and Guangzhou. While the play caters to mostly older audiences in the U.S., the China performances attracted a majority of young professionals in the field of law and journalism.

For the China tour, Cowan decided to add to the script, including a conversation between Henry Kissinger and President Nixon discussing US-China relations.

“In thinking about the play for China, I realized there were a couple of lines in the play always about China, but I hadn’t really examined it,” Cowan said. “The dates of the play coincide exactly with the secrecy of the Nixon-Kissinger correspondence with China.”

In the China version of the play, a giddy Nixon and an awkwardly stiff Kissinger celebrate their invitation for a diplomatic visit to China. The caricature of these historic figures brings added laughs to the production, but highlights the relevance of the Pentagon Papers in US-China diplomacy.

Cowan notes the printing of the papers could have shown that “America couldn’t be trusted to keep secrets” and potentially threaten warming relations between both sides ahead of Nixon’s visit to China in 1972.

Along with issues of diplomacy, the content of the play addresses sensitive topics in China, with crackdowns on journalists and anti-government activists increasing over the last year. Surprisingly, when the play’s director, Susan A. Lowenberg of L.A. Theatre Works, first decided on a China run of the play two years ago, she encountered more difficulty with fundraising than government red-tape.

“It was difficult to fundraise for this because a lot of people doing business in China didn’t want anything to do with it because they saw it as potentially controversial,” Lowenberg said. “If it was The Nutcracker or Cinderella, I’m sure we could have gotten tons of support and money, but we’re not.”

Lowenberg decided to team up with Chinese performing arts veteran Alison Friedman of Ping Pong Productions. With 10 years of experience in China and a wealth of contacts, Friedman secured necessary cultural permits and the 10-day tour materialized.

But the play’s run in China wasn’t without issues as the production soon encountered roadblocks from government officials. Though the play’s permits and controversial content was approved, the real difficulty came in replicating the Los Angeles post-play discussion.

In Beijing, a text message from local officials during the play’s second act cancelled the discussion on grounds of “unforeseen outcomes.” In Guangzhou, the Foreign Office of Sun Yat Sen University cancelled the post-performance talk over similar qualms.

“[The Foreign Office] found out there would be a post-play discussion and they got very upset saying we didn’t ask for permission,” Lowenberg said. “But Geoff sat on the steps after the show with [law students from Shenzhen] and basically did a Q&A with the students.

Beyond government interference, organizers worried the play wouldn’t match the opulent tradition of China’s performing arts. Actors were even briefed on the potential of audiences leaving during the play.

“Audiences were totally rapt,” Friedman said. “A lot of performances in China are a lot of flash and trash and a lot of lights and smoke and big sets, and [Top Secret] was really bare, people and great stories and great content on a very bare stage.”

But in the end, Top Secret did provide a glimpse of something different for Chinese audiences.

“[Top Secret] is a great example of cultural diplomacy,” Lowenberg said, “to really learn about how American democracy works, warts and all.”