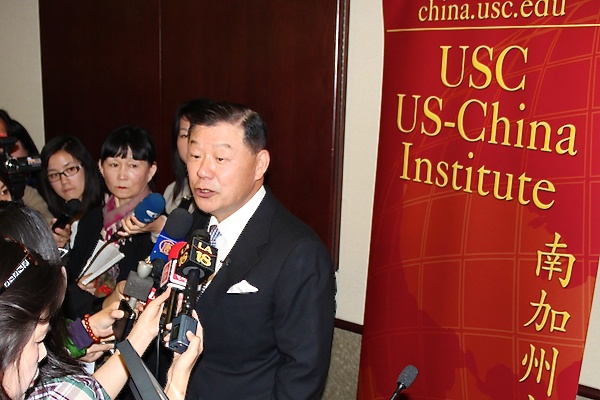 US-China Today sits down with Ambassador Jason Yuan, chief representative of the Taipei Economic and Cultural Representative Office in Washington, DC, to discuss the future of US-Taiwan relations.

From the re-election of President Ma Ying-jeou to the explosion of New York Knicks basketball sensation Jeremy Lin, Taiwan has been making headlines. The Republic of China (Taiwan) has been one of the US’s closest allies in East Asia since Nationalist forces established government control of the island following the Chinese civil war.  While tensions persist across the Strait, Taiwan’s relations with the People’s Republic of China have seen a warming in recent years. Since the departure of DPP President Chen Shui-bian, an often vocal critic of engagement with the PRC, President Ma has focused on the economic linkages between both sides, with over 70% of Taiwan’s outbound investment heading to the mainland. Taiwanese products continue to reach farther into global markets and imaginations. The country’s beef noodle soup has been making its rounds much to the joy of international palettes, and many consumers now carry Taiwan-developed HTC smart phones in their pockets. Still, the PRC’s One-China policy and its growing influence in the global arena continue to limit Taiwan from full participation in most international organizations. With more than 1500 missiles targeted at the island from across the Strait, the potential for military conflict very much exists.

What do you think is the biggest challenge for Taiwan in the US today?
Country to country there is a challenge, but certainly we enjoy a close relationship with the United States for so many years as an ally, with or without diplomatic ties. We always treasure this friendship with the United States and we will continue to strengthen the relationship. Without the friendship and support of the US, it would be very difficult for us to conduct international relations, particularly the cross-strait relationship. We are trying hard to create an environment for a win-win situation between the US, mainland China and Taiwan.
Talking about this challenge, if we don’t enjoy a cordial relationship, particularly economic with mainland China, it won’t be good for US-Taiwan relations too. That is why we want to take advantage of this kind of relationship with the encouragement of the United States to improve the cross-strait relationship and be able to have this kind of common relationship between the US and Taiwan.

How does President Ma’s reelection affect the Taiwan-China relationship?

Looking back between 2000-2008 and even before that, we saw eye-to-eye for many years until President Ma took over office in year 2008. He completely shifted policy from eye-to-eye and instead created some kind of a dialogue between Taiwan and Mainland China. For the last few years, we have conducted some rounds of negotiations and we concluded to sign the 16 agreements and that’s all positive even though it’s economically [focused]. After four years, even though Ma Ying-jeou got reelected, we’re talking about another four years, so both sides feel even if your policy is sound, [over] the next four years we will create a better, friendlier relationship between Taipei and Beijing.

What has been the most important development in Taiwan-US relations over the last four years?

I think country-to-country, people-to-people, family-to-family, mutual trust is the key and we showed this kind of mutual trust for a while between 2000 and 2008. The number one issue for Ma Ying-jeou for the last four years is how can we win back the mutual trust between Taiwan and the US, so he made it very clear to the United States that his policies are no surprise to [our] friend the United States because he knows the United states has to deal with the world.
More importantly is how to find a common interest between the US and Taiwan. If [something] is good to both the US and Taiwan, then we are going to pursue it. If only [in the] interest of Taiwan, we have to think it over, or if only interest to the United States, then that’s not the best direction to go. So we try to find a common interest between the US and Taiwan, which for the last four years has become pretty smooth including the arms sale issue, high-level [state] visits, including VWP [Visa Waiver Program] candidacy. Looking for the next four years, there are still lots of things to work together and I do have a high hope that under the same leadership by Ma Ying-jeou, we can foresee a closer relationship between the US and Taiwan.

What do you think is the most common misconception Americans have about the Taiwanese?

In what regions and industries does Taiwan hope to expand trade with?

With China expanding its interest within Africa, Latin America and other developing countries, how is Taiwan seeking to broaden its engagement in these areas as well?

It is tough, we only maintain [diplomatic relations with] 23 countries, and of course in Africa we do enjoy several countries and in Latin America too. But when you talk about only 23 countries vis-à-vis [China] with more than 170 countries worldwide, it is not easy. My president made it very clear that even though a small island like Taiwan ROC only maintains diplomatic ties with 23 countries, we want to faithfully see how we can help each other. Economically and scientifically, we are [successful], so if there is anyway we can give a hand to help our friendly countries to influence other countries, this is what we like to do. In the international arena we try to generate more friends than enemies and we are not trying to use those friendships to attack anybody else. We just want to strengthen our relationship.

Are you seeing this strengthening more through culture or trade, or both of those areas?

Trade and culture. We just established three Taiwan cultural centers here in the United States. In the meantime in Europe, and we will try to expand to Latin America and Africa down the road.

Why are arm sales so significant to Taiwan, to China and to the US?

Because we have to build up our confidence. The ROC Taiwan is a small island and vis-à-vis huge China, there is always a threat and they still have 1,400 missiles targeting Taiwan, their eventual goal is of course to grab Taiwan. Fortunately we have a friend in the United States to support us and this kind of arms sale is not for us to invade, but we want to give a clear message to the other side that we do have a deterrent force. In the meantime, this is a strong, symbolic message for the other side – the US will protect us for democracy.

It is totally different from my [youth] because when we were young, no one was interested in politics. Because the history of China was that of an emperor and king, it was at a different level of people. So as long as we could work hard for our living, that was it. But nowadays, the younger generation is totally different, they campaign for their seat, they want to have a bright future built up by themselves. You can tell during our election there is no country like this, particularly a democratic country. Last election we had 74% of people vote. [We could] see how interested and how enthusiastic [the young people] are in politics. That is very healthy and I think that is good particularly because we have so many students abroad and go back to serve the government and run for different seats and different levels.

With the announcement of the increased US engagement in the Pacific, do you expect changes within the region?

We are very glad and we welcome the US’s policy as a pivot within Asia Pacific. We always have confidence and always think the US basically is also a Pacific country. You have to have a balanced view, [it is] not like old days with only Europe. Now you can see the Asia Pacific has become more important and I’m glad that the US policy tries to emphasize Asia Pacific again. A friend like Taiwan always welcomes your sound policy.
Rachel Will is a senior at the University of Southern California, majoring in public relations and marketing. She is deputy editor of US-China Today.