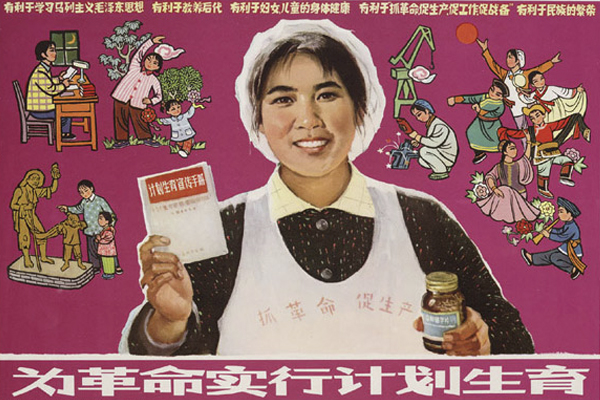 Contraceptive Use In China

“Carry out birth planning for the revolution.”

The standard issue propaganda poster, along with its countless similar replications, was a patriotic call for birth control in the name of productivity and health. China was already short on food and resources, and with the country’s population exploding, the future looked positively slim. The government’s earliest efforts to control the burgeoning populace came in the form of these slogans and national dictums, which later expanded to include contraceptive use.

“20 years ago if you went to the rural villages, you could see the slogans on the wall that read, ‘if you have one child, IUD please, if you have two children, sterilization please,’” describes Kaining Zhang, a research physician at the Yunnan Health and Development Research Association. “There is still a very strong influence [from that] policy.”

Today, attitudes towards sexuality and reproductive health have dramatically shifted in China. The once taboo topics have been the subjects of national campaigns to increase sexual health awareness, and a survey by Renmin University shows that more than half of all respondents think premarital sex is acceptable.

China has one of the highest rates of contraceptive use in the world with 84.6% prevalence among women who are currently married or in union. In comparison, the United States has a 78.6% prevalence, and China’s next largest neighbor, Japan, reports 54.3% prevalence. The high figures owe much to China’s vast network of family planning centers and other government initiatives in local communities that followed the implementation of the One-Child policy in 1979.

Sterilization has a 28.7% usage rate and is typically recommended to women following the birth of a second child. Intrauterine devices (IUDs) have a 40.6% usage rate, and though not permanent, are often promoted by state health services over temporary methods.

“There is a heavy emphasis on IUDs and sterilization, this may be a barrier [to contraceptive use] and people perhaps not wanting to use either of these two methods and finding themselves pregnant,” says Amy Tsui, Director of The Bill & Melinda Gates Institute of Population & Reproductive Health.

The preference toward long-term methods of birth control is one that has contributed to gaps in sexual health awareness in younger generations of Chinese. The National Population and Family Planning Commission oversees China’s population development and has made improvements in the access to birth control and sexual health education such as increased school initiatives and national campaigns about sexuality. However, the majority of these services are intended for married couples, leaving young, single individuals without free state coverage.

“For young people, they are not covered by the family planning program because they are not married, so they fall through the cracks in terms of sex education and contraceptive access,” says Joan Kaufman, Distinguished Scientist at the Schneider Institutes for Health Policy at Brandeis University. “They can certainly purchase birth control at drug stores, but it is harder for them access services from China’s free family planning program.”

Temporary means of contraception such as condoms or hormonal contraception are used in low frequency in China. Among married couples, only 1.2% use pills and 8.5% use condoms. For adolescents who are likely to choose non-permanent contraceptive methods, the lack of usage could indicate a lack of knowledge of these methods or simple inaccessibility. According to Euromonitor, however, sales of emergency contraception grew by 8% in 2011 to reach almost RMB1.3 billion, a method that has seen a steady growth within the last decade.

Gaps in education and its effect

The inaccessibility of state services parallels a rapid rise in premarital sex rates among China’s young people. A 2003 report by the China Family Planning Association showed that in most provinces, 60-70% of respondents engaged in premarital sex.

While abortion and its connection to China’s family planning laws have long been a highly contentious issue, the high abortion rate among China’s youth is thought to be a direct result of inadequate services and education. In 2009, Chinese health officials reported that 13 million abortions are performed in China annually. Of the total, 62% were among women between 20 and 29 years old, while most were single.

“Many young people don’t use contraception at all and that is reflected in high abortion rates for youth,” Dr. Kaufman says.

While there have been increases in sex education, these improvements have been slow and targeted toward abstinence education. Chinese adolescents are hungry for information on sexual health and many turn to anonymous social media websites such as RenRen and Weibo for information on preventing unwanted pregnancy. Mary Stopes International, a UK based non-governmental organization providing sexual and reproductive healthcare services, even created a Chinese online resource called You and Me in order to create open dialogue on sexual health.

“Two decades ago it was so strange for parents and schools that there should be some marriage sex education,” Zhang says. “Now we see more and more publications from the [Western] countries saying that we have to give children more information and choice before marriage.”

Within the adolescent group, migrant youth in particular are excluded from the current system. Under the current residency registration system, or “hukou” system, an individual may only access state services in their home province or district, leaving most migrants with few options. For many young Chinese seeking work in urban areas, this creates a problem for free contraceptive access and sexual health education.

In a study published in the Journal of Adolescent Health, 63.6% of urban non-migrants reported unprotectedintercourse compared to 83.1% of rural-to-urban migrants in Shanghai. Though lack of access to free contraceptives is high for both groups, urban migrants face significantly higher barriers.

One facet of China’s family planning measures does seem to be relaxing.

“The vigilance and implementation of the One-Child policy, while it is centrally decided, is less stringent in the rural areas instead of the cities,” Dr. Tsui says. “The implementation is not [as] coercive as the Western media makes it out to be.”

While urban families with additional children will easily draw unwanted attention, rural areas have seen a easing of enforcement in recent years. Nationwide, individuals who have no siblings, and marry another single child, may have two children under the current policy. Members of China’s 55 ethnic minority groups are also exempt from the One-Child policy.

The policy shift is partially fueled by increased abortions for couples unwilling to pay second child fines or participating in selective sex abortions, hoping to conceive a male child. Further, reports of forced abortion for women with multiple children add gravity to the situation.

“When you read their laws, definitely they do talk about issues of quality of care and access to resources,” says Sai Sulo, of the Asian-Pacific Research and Resource Centre for Women. “But in terms of what we’ve observed, we are not exactly sure of how that whole policy is translated.”

China has made strides in recent years to creating a more open dialogue and adhering to the prevailing rhetoric of the international health community regarding contraceptive use. The nation still can improve in terms of providing universal state coverage and increasing sexual health education initiatives.