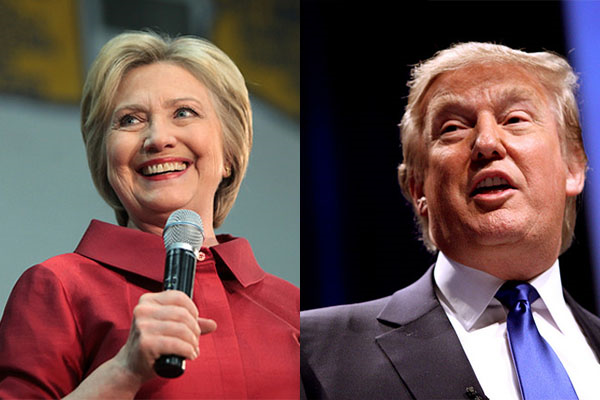 The China Card in the 2016 Presidential Election

Hao “Joe” Yin watched previous debates between U.S. presidential candidates Donald Trump and Hillary Clinton with fervor. With the help of a translation team mainly composed of Chinese college and high school students, Yin aims to bring the latest news and drama surrounding the election to the thousands of followers on his Weibo account, whom he describes as “highly educated” with international experience and “media professionals.”

Originally started as a hobby to translate videos like Comedy Central’s The Daily Show with Jon Stewart, Yin’s work now goes straight to the source material – speeches, debates, or as he puts it, “the raw stuff.” So what is driving the increasing viewership to his posts? Yin believes it’s the subject matter – mainly, China.

“The Huffington Post posted the video showing Trump saying ‘China’ hundreds of times… It’s out of context,” says Yin. “People are curious. Trump actually said China more than a hundred times, so, ‘What’s the [context] of that?’”

Of the many policy issues of a presidential election, the topic of relations with China has been a campaign issue for decades. This election has proved significant in China-related issues due to the candidates’ colorful rhetoric and actions, and the measured interest of Chinese in hearing their messages. Further, because of their increasing numbers, Asian American voters could play a greater role in deciding the next president, making this a meaningful election for China watchers.

China and the U.S. President 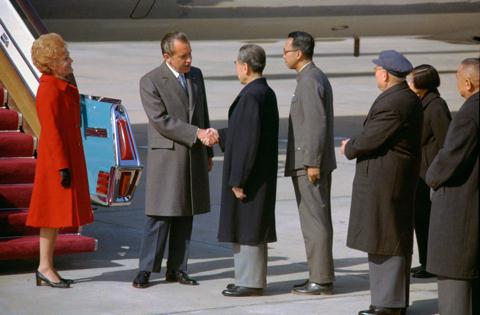 The 2016 race is not the first election where the United States’ relationship with China has been a target of campaign rhetoric. Since President Nixon made his historic first visit to China in 1972, candidates have repeatedly argued that they have the best understanding and plan to deal with China. China’s economic rise, especially in the 21st century, has increased China’s presence in campaigns. Many Americans feel threatened by the rise of China, thus making it a target for blame and bashing on the campaign trail.

Looking back to just 2012, GOP presidential nominee Mitt Romney promised to take a harsh stance against China if he won the presidency. “On day one, I will label China a currency manipulator,” said Romney, “which will allow me as president to be able to put in place, if necessary, tariffs where I believe that they are taking unfair advantage of our manufacturers.” This stance was similarly echoed by Trump this election cycle.

Even as he met with Chinese President Xi Jinping in March, U.S. President Barack Obama felt obliged to highlight problems such as human rights, cybersecurity and maritime issues. He also stressed the importance of a continued relationship with China in regards to the global economy, nuclear security and climate change.

When Trump’s speeches and website address China, the focus is on trade. The site reads, “The most important component of our China policy is leadership and strength at the negotiating table.” Throughout his campaign, Trump has taken many of the same positions as previous Republican nominee Mitt Romney did in 2012. In his acceptance speech at the Republican National Convention in July, Trump laid out his plan to deal with “cheating” Chinese traders:

“We are going to enforce [sic] all trade violations, including through the use of taxes and tariffs, against any country that cheats. This includes stopping China’s outrageous theft of intellectual property, along with their illegal product dumping, and their devastating currency manipulation. Our horrible trade agreements with China and many others will be totally renegotiated. That includes renegotiating NAFTA to get a much better deal for America – and we’ll walk away if we don’t get the deal that we want.”

So what is driving Trump, Romney and so many other presidential hopefuls to campaign on maintaining economic superiority over China?

In a 2015 survey by the Pew Research Center, Americans’ top concerns about China were the amount of American debt held by China as well as American manufacturing jobs heading overseas. That same survey also found that Republicans are more concerned about issues related to China than their Democratic counterparts. By making China the primary target, Trump has found license to go after China as viscerally as possible. In a May speech, Trump said, “We cannot continue to allow China to rape our country.”

This tone is harsher than most previous criticisms of Chinese policies. But criticism is the norm. Dr. Jack Pitney of Claremont McKenna College explains, “One does not gain any political points by praising China. It’s easy for Americans to blame our economic problems on foreign competition… It’s a quick, easy and superficially plausible explanation. And Trump is exploiting that perception.”

Trump is not the only candidate in this election who has campaigned on pledges to strengthen the American economy in spite of Chinese challenges. During her acceptance speech at the Democratic National Convention in August, Clinton offered similar promises:

Clinton’s history of critiquing China for its human rights policies has kept the Chinese government and media watching. In 1995 Clinton spoke at a United Nations conference in China, asserting, “Human rights are women’s rights, and women’s rights are human rights.” Ten years later, the speech still resonates. In a 2015 tweet, she spoke out against President Xi Jinping’s record on women’s rights—specifically when China locked up women activists at the same time Xi spoke about women’s rights at the UN—calling it “shameless.” A crowning achievement of her time as secretary of state was granting the activist lawyer Chen Guangcheng refuge in the U.S. Embassy in Beijing. Chen later criticized Clinton and the Obama administration’s handling of the case. She has also been criticized by Chinese officials for advocating for American military enforcement of freedom of navigation in the South China Sea.

In her 2014 book, Hard Choices, Clinton outlined the complexity of U.S. and Chinese interests. “This isn’t a relationship that fits neatly into categories like friend or rival, and it may never. We are sailing in uncharted waters.”

As the campaign ramps up, the harshness of Clinton’s tone likely will not reach the levels of Trump, at least to one expert. “As a former secretary of state, she understands the reality of diplomacy,” says Pitney, “and I think her comments will be measured and careful.”

Much of the rhetoric provided by both candidates has been normal in relation to American presidential campaigns; however, there have been some differences due to what Yin calls a “very special candidate” – Trump.

Many in the Chinese-American community have spoken out against Trump’s negative comments, especially his use of “rape” when describing the U.S.-China relationship. Democratic Congresswoman Judy Chu, Chairperson for the Asian Pacific American Congressional Caucus, condemned Trump, saying, “These are irresponsible statements. And they do not help in our relationship with these countries.” Chu believes the candidates’ strategies to deal with China and other Asian countries will play an important role in this election.

“The Asian American community is 70% foreign born . Hence, they really do look at foreign affairs and the relationship between the U.S. and countries in Asia,” says Congresswoman Chu. “The Asian American community is very sensitive to the type of person who would be in that seat. They want somebody who would be thoughtful and who would ensure that we have a positive relationship with those countries.”

There is some disagreement about whether or not Trump’s rhetoric will have any outcome on this election. “I’m not sure that Asian-American voters will be a pivotal voting group since they tend to be concentrated in states that are heavily Democratic,” says Pitney, “specifically, Hawaii, Washington and California.”

The intensity of Trump’s criticism towards China in addition to changing demographics in the U.S. may offer some insight as to how the game is changing for political stances related to China.

“The AAPI [Asian-American, Pacific Islander] vote has doubled over the last decade… [This will double again] from 2020 to 2040 ,” says Congresswoman Chu. “We are now the swing vote in swing states like Virginia and Nevada…. We are going from being ‘the marginalized’ to the margin of victory.”

So how do the Chinese people perceive this election?

“I think for some people following the presidential election,” says Kecheng Fang, a doctoral candidate specializing in political communication at the University of Pennsylvania, “it’s not so different from following the new episode of Game of Thrones or House of Cards.”

Donald Trump’s candidacy has captivated many in China. Trump’s popularity has been growing in China, as reported by Fortune, CBS and USA TODAY. Weibo blogger Yin offered some insight as to why this is happening:

“If you watch the comments section [of our posts], Trump fans always leave a comment,” says Yin, “If you make a poll for my audience, Trump will win.” Among the comments section, you’ll find many remarks related to slogans like “Build the Wall,” and many other Trump-isms. “Trump always gave his opponents some nicknames… for example, ‘Lying Ted’, ‘Crooked Hillary,’ or something. It’s very simple and very easy to remember those phrases, so my audience just repeatedly comments it.”

Despite the harsh tone towards China, the Chinese remain unfazed – counting on Trump’s business acumen to cause him to back away from his campaign rhetoric. “If Trump really becomes the president, he will trade with China because China has the biggest market,” says Fang. “A businessman cannot ignore this big market, so Trump supporters persuade themselves that, ‘Oh, this is only narrative in campaigns… He will be good to China. He will be better to China than Clinton.’”

Though China’s citizens are voicing their opinions, there has been little commentary from the ruling Chinese Communist Party [CCP]. “According to the Chinese government,” says Fang, “Our country should not intervene with the domestic politics of other countries.”

Still, in July, an unnamed senior Chinese diplomat told Reuters that “Clinton will be a difficult partner” for China, though the official admitted to not knowing much about Trump.

However, the state-controlled Global Times may offer insight into what China’s leaders think of the U.S. election, in which they have compared the rise of Trump to the elections of Hitler and Mussolini and call it a “heavy lesson for Western Democracy.”

“America has been regarded as a model, as an example of democracy,” says Fang. “When referring to democracy or constitutionalism or freedom, people always refer to America first… If this election becomes a mess or causes many problems, it might become a bad example.”

With so many variables involved, this election offers many new sources of tension to the dynamic relationship between the U.S. and China. In an election where both Trump and Clinton have challenged China in a variety of ways, President Xi’s remarks in March to President Obama offered a glimpse of how Chinese officials hope to deal with the next U.S. administration:

“Our two countries have some disputes and disagreements in some areas…On the basis of respecting each other’s core interests and major concerns, we should seek active solutions through dialogue and consultation. Even when this is not possible, for the time being, we should manage them constructively and avoid misunderstanding and misperception or escalation, and prevent big disruptions to the overall interests of China-U.S. cooperation.”

It won’t be a surprise if the tradition of China bashing continues as both candidates campaign to win the votes of the American people, but the Chinese are confident that the winner will have no choice but to find accommodation with China.