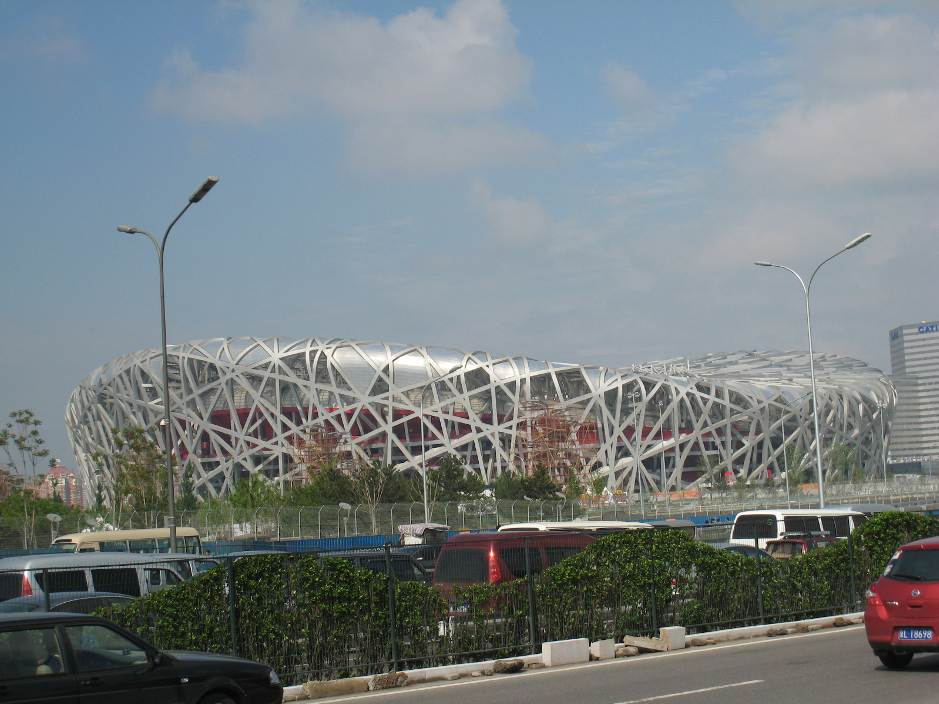 China's Goals for its Next Green Olympics
By Betty ThaiJune 29, 2020 No Comments

When Beijing was chosen to be the site of the 2008 Olympics in July 2001, there were concerns about Beijing’s environmental issues, especially its ‘airpocalypse.’ These concerns were especially heightened considering the growing general Olympism focus on sustainability. And with the upcoming 2022 Games, one can only hope Beijing continues its environmental policies to uphold the third Olympic pillar of the Environment.

In the seven years of preparation leading up to the 2008 world event, Beijing implemented various measures to curb its pollution, from air quality assurance to even water treatment. These measures’ legacies are seen today in everyday life and can be expected to be expanded upon in preparation for the 2022 Winter Olympics. In addition, the demands of the Summer and Winter Olympics vary, and Beijing’s 2022 plans have created some causes of concern, namely the issue of artificial snow.

But, in comparing the environmental efforts between in preparation of 2008 and 2022, it is also worth exploring some political and economic considerations that can either hinder or further encourage some of China’s green promises. These include the recent economic slowdown, problems of implementation within the current structure and how Beijing understands the role of the Olympics in its green journey. 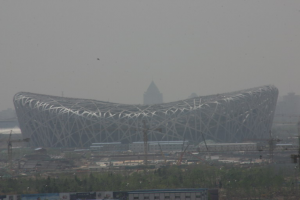 Beijing is infamous for its heavy air pollution, which often results in a vision-obscuring smog hanging over the city

In 2008, Beijing saw huge movements to cut its industrial and vehicle emissions to improve its air quality for the arriving international audience. They invested $3.3 billion USD to open up six new subway lines and also moved entire factories to Hebei. According to Jennifer Turner, director of the Woodrow Wilson Center’s China Environment Forum, the Environmental Defense Fund came up with the idea to suggest alternating license plates to further cut back emissions.

The results showed the city’s efforts were rewarded: Beijing saw some of its clearest skies. For the next 13 days, Beijing even saw air quality better than that of Los Angeles, London and New York.

After 2008, the strict regulations were removed and the air quality declined, hitting the most toxic levels in 2012 and 2013. Nonetheless, as law professor Tseming Yang of Santa Clara University noted, there is a general trend to shift China’s economy away from a heavy-industry one to a service-based one. This means disfavoring old industries and encouraging new ones that rely on advanced technology and are less polluting.

2022 will most likely see similar extreme air quality measures. As  Turner said,“the city and people were generally okay with that. In any city, when you’re going to have this huge international audience, sacrifices have to be made.” 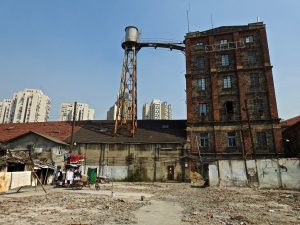 The 2008 Olympics served as a strong catalyst for wastewater treatment systems and water transport projects. Turner explained in the past, only 22 percent of Chinese cities had adequate wastewater treatment; that percentage has since increased to nearly 100 percent.

Additionally, Olympic demands pushed aside political debates surrounding the South-North Water Transport Project, accelerating its development. However, as Turner noted, this project is only a short-term solution, as climate change continues and Southern China will increasingly need water from the Yangtze River slowly drying up.

In 2022, water concerns will shift to the artificial snow Beijing needs to create for winter sports, as fake snow contains more minerals and nutrients that will be worse for the environment. Furthermore, the lack of water in the North can exacerbate the environmental damage: 49 million gallons of water are required to make the snow, and the water will most likely have to come from the Guanting Reservoir—China’s second-largest reservoir and an essential water source for Beijing.

“It’s a sacrifice that Beijing was probably willing to make,” Turner said. “They’ve had time to plan, and they’ll make it work. Someone will just be a little thirstier.” 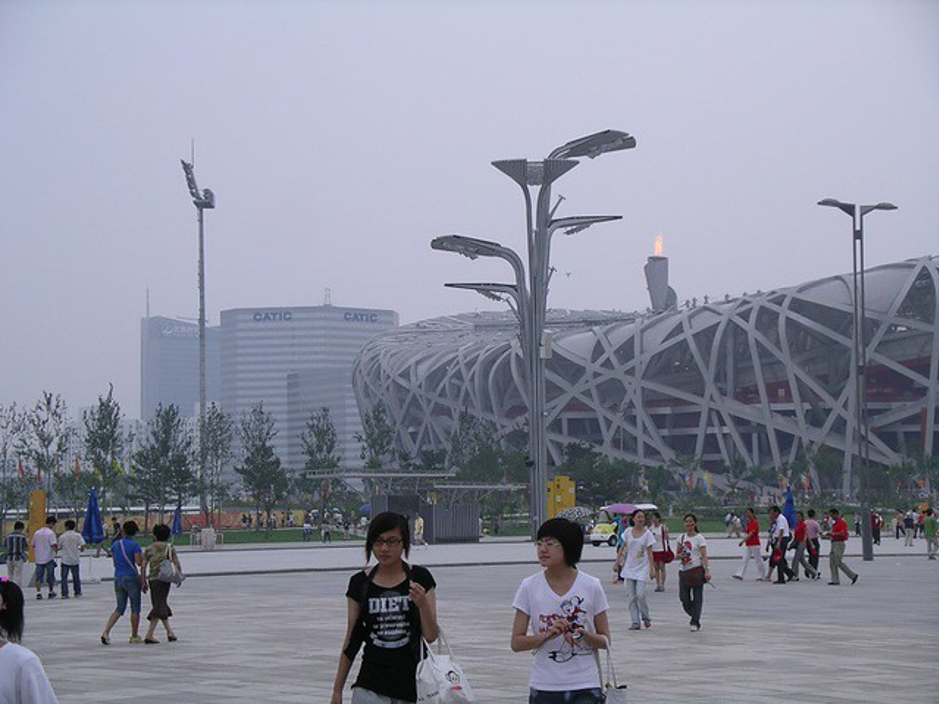 The main driving force for a Green Olympics is the international audience during those two weeks. With millions of foreign eyes on Beijing, the party leaders are determined to have the event go smoothly and prevent anything that could embarrass the country and the government. Such sentiments would be true of any host.

Unique to China is the lack of political freedom, which could and have led to protests. According to UCLA Law School professor Alex Wang, “It’s a natural time for people who have grievances, to raise those grievances, because people will see those things, that those problems can be made more visible at that time.”

In response to the significant stresses Beijing faced with hosting the 2008 Olympics, the international community contributed to preparing and making the event green. For example,Olympics worldwide partner GE donated two advanced water treatment systems to Beijing to celebrate the 2008 Games. Coca-Cola even created a competition called “Save a Barrel of Water” to further promote water policies.

However, according to Turner, international participation in Chinese environmental movements has decreased significantly because of new regulations for foreign entities acting within its borders.

“They register with the Public Security Bureau,” she explained. “They’re much more closely monitored. So it’s a different world, and it makes it a lot harder for international foundations to support grassroots groups or even Chinese universities.”

Professor Yang also discusses some of the limited subject matters environmental NGOs are allowed to focus on. These include education and nature conservation, mainly because they are non-controversial. Issues that intersect or collide directly with economic development are avoided. As a result, the government-sponsored NGO All-China Environment Federation (ACEF) is allowed to carry out public interest litigation.

But with the 2022 Olympics coming up, it can be expected that Beijing will open its doors again to international participation. Already, the city launched a campaign “Building a Dream Together” to recruit nearly 40,000 volunteers from all over the world to help with media operations, language services, and technology.

Much of the environmental governance changes that started in the early 90s and continued over these past two decades come from internal pressures. Yang believes increased tensions led the government to recognize the importance of rectifying pollution issues, which then resulted in increasingly integrated environmental policies: “Growing prosperity leads people to be more concerned about environmental pollution issues in life.”

As Wang puts it, Beijing faced reputational pressures as Chinese citizens began asking questions about the status quo: “Why do I have to live in such a polluted place? Is that the only way you can do it? Or does this mean that my government isn’t doing as good of a job as they could have?” These questions can impact the CCP’s legitimacy, motivating the Party to meet environmental demands.

Citizen pressures led to the recent involvement of the Supreme People’s Procuratorate in environmental enforcement. Yang explained around 2014, the government started a pilot program where a public interest litigation provision was included in the environmental protection law revisions, allowing NGOs to bring lawsuits against local governments failing to enforce the pollution laws.

Internal pressures have even inspired economic changes. The government has made industrial shifts beyond climate change or Olympic considerations. However, there may be potential setbacks due to the recent economic slackening, exacerbated by the recent COVID-19 circumstances. “When the economy slows down in any country, the environment sometimes is the first to go,” Turner said. “There’s a bigger pressure to burn coal again.” Especially with China’s substantial reliance on exports to meet the high demands of Western consumers and Xi’s ambitious economic policies, pollution regulations have already began to loosen.

Nonetheless, Yang remains hopeful about the temporary setback: “It’s not going to be permanent, whatever relaxation of environmental controls,” he said. “The trend towards and the demand for cleaner air and water and all these concerns are not a temporary thing. I mean, these are permanent expectations that have been built into the Chinese citizenry.”

China treated the 2008 Olympics as the country’s debutante celebration, emerging as a major global player with great economic and political power. And as China has continued to establish itself since, the 2022 Games will have different goals.

“It’s not about proving yourself at this point, and more about just showing off,” Yang said. “What can China offer at this point?”

Professor Wang agrees: the 2022 Games is a chance for Beijing to show the world what its priorities are and what it wants the world to see as its priorities. In terms of environmentalism, the Olympics can serve as a catalyst for important changes. As Turner states, “the 2008 Olympics accelerated some important infrastructure improvements, from clean energy to wastewater treatment.” 2022 is another opportunity for Beijing to use the Olympic momentum to push additional environmental policies through.

However, Wang is cautious about Beijing effectively taking advantage of this chance. Even though Beijing has made green energy pledges, the problem becomes whether these promises are meaningful or merely symbolic. Moreover, he is concerned measures will be too focused on short-term improvements just for the two-week event. Rather, he believes that the Olympics should be only a step in a much longer process.

Professor Yang raises further concerns about the implementation and enforcement of environmental policies beyond the Olympic context. Local protectionism (restrictive economic blockades Chinese provincial and local leaders use to prevent local raw materials and goods from leaving the region) and the government system pose strong challenges to implementation in the institutional structure. According to Yang, changing the political structure will bring positive change to not only political reforms but also environmental governance. Traditional administrative enforcement is another challenge. But the aforementioned increasing involvement of the Supreme People’s Procuratorate was started to address the enforcement problem.

Despite these challenges, the promise for a green 2022 Olympics appears very likely. China already has their templates from the 2008 Olympics, and the fact that they did very well then means there is no reason to expect that 2022 will not meet expectations.

Wang concurs, further noting the combination of internal and external pressures will incentivize China to meet environmental standards for the Olympics and continue integrating such policies post-Olympics.

“Pollution should be a hopeful story,” Wang said. “It’s been slower than a lot of people would have liked, but their movements have been substantial.”

Yang seems the most optimistic about the overall future of China even if the situation currently seems to worsen. “Whatever progress you make on environmental policy actually will ultimately also be reflected on the rule of law and human rights,” he expressed. “These are all mutually supportive, you know, supporting human rights supports ultimately environment protection and vice versa.”