China’s Lehman Moment: Why the Evergrande Crisis Is a Wake-Up Call for the West

By Jack CibuzarNovember 30, 2021 No Comments

Picture it: Empty high-rise apartments stand out against the brown desert plains of inner Mongolia like grey skeletons. Suddenly, a thunderous blast breaks the silence of the uninhabited city’s desolate streets as the buildings are demolished into a cloud of dust and debris. This is a regular occurrence for the inhabitants of China’s “ghost cities,” which are built to house millions of people but frequently home to less than 100,000 residents.

The most recent China Household Finance Survey shows that 21 percent of China’s homes were vacant as of 2017. That equates to 65 million empty homes– enough to house the population of France. Reliant on real estate development for economic growth, Chinese real estate firms have been incentivized to build more and more homes despite the fact that the country does not have enough people to fill them. This unsustainable model of growth has produced the largest financial bubble seen since the U.S. housing crisis– and it seems ready to pop.

Warning signs of the world’s next potential recession are scattered throughout the Chinese economy. Overdevelopment and reckless spending by China’s real estate sector have brought some of the world’s largest real estate firms to the brink of collapse, creating market volatility and the loss of consumer confidence. Sound familiar? This same combination of irresponsible corporate behavior and under-regulation caused the Great Recession just over a decade ago.

Because of the Chinese economy’s dependence on growing real estate value, overdevelopment has become a major issue and property prices have skyrocketed. Affording a home has become so difficult for China’s middle-class that President Xi Jinping has imposed spending caps on the country’s real estate firms to prevent further price hikes and subsequent social discontent. But by imposing spending cap measures, the government has simply turned its housing crisis into a debt crisis. The spending cap policy has prevented real estate firms like Evergrande from being able to finance their debt, which has led to the firm’s rapid accumulation of an insurmountable $300+ billion of debt.

Now, the Chinese government appears to be facing a similar conundrum faced by the U.S. government in 2008. If China were to let Evergrande default, the economic consequences would be far-reaching; ​​up to 1.6 million of Evergrande’s homebuyers and hundreds of small businesses, creditors and banks would lose their money. If they choose to bail Evergrande out, they would establish a dangerous precedent that some firms are too big to fail. 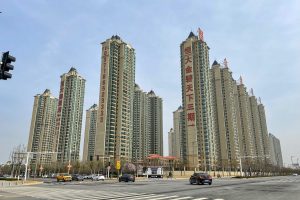 Buildings built by Evergrande in China. Media from Windmemories, March 2021.

But a disastrous global recession is not inevitable. Although China’s real estate sector shows the same warning signs that came before the U.S. housing collapse, there is one key difference between the 2008 Crisis and the crisis China is facing today. The U.S. government’s goal in 2008 was to protect the rights of its citizens, while the Chinese government’s goal is to maintain party power over citizens in the one-party state. Unlike the U.S., where laws set boundaries that prevent the government from violating the rights of business owners, the Chinese government is bound by no such laws. China’s one-party system provides President Xi with tools to handle the Evergrande crisis that a U.S. president would never have at their disposal. Xi’s free reign to manage the crisis without being bound to the rule of law opens up all kinds of avenues to prevent China’s real estate crisis from becoming a global one.

Despite this, the U.S. and its allies must pay close attention to how President Xi decides to handle the crisis. His decision will illuminate an ideological struggle that has the potential to redefine the global balance of power. The Evergrande crisis is just one example of the uphill battle that democracies face in their competition with the growing authoritarianism emanating from China.

A Chinese expert in Beijing’s economic policy, wishing to remain anonymous out of fear of his family’s safety in China, believes that allowing Evergrande to default or bailing the firm out are both “out of the question” for President Xi. The expert asserts that allowing the firm to default is not an option due to the severe global financial impact that would inevitably occur. Xi is also unwilling to provide a bailout for Evergrande because of the negative consequences for domestic consumers and the harmful precedent that would be created by the decision. Instead, the expert says President Xi is most likely considering two options that would avoid the drawbacks of a default or a bailout but would be illegal by U.S. standards. One option would be to ring-fence Evergrande’s debt to offshore investors, shifting the debt burden to international bondholders. Another option would be to essentially nationalize the firm by forcing its owners to pay the debt out of their own pockets until they are compelled to divest the firm’s remaining assets to the government. This method of handling the crisis is obviously illegal in the United States, where owners of incorporated firms are protected from personal liability by LLC laws. 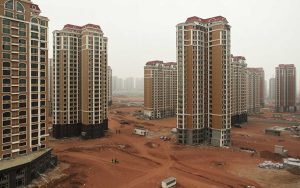 Kangbashi, on the outskirts of Ordos in central Mongolia. Media credit Gizmodo AU.

President Xi is highly motivated to choose the latter option for several economic and political reasons, according to the anonymous expert. By forcing Evergrande’s owners to bear the brunt of the debt, Xi will avoid the negative economic and political repercussions that would come from placing the majority of the burden on Chinese consumers through a bailout. This option would also avoid the international uproar sure to come from ring-fencing the debt to foreign investors. By choosing to bleed Evergrande’s owners dry, President Xi would also be eliminating a long-standing domestic political rival.

Xi has long viewed the elite owners of China’s giant real estate giants including Evergrande as a political threat, as many of these owners have close ties with his chief rival– the late President Deng Xiaoping. The expert asserts that President Xi does not see eye-to-eye with President Deng’s policy of “reform and open up” (改革开放), which he views as an attempt to Westernize the state. President Xi has directly contradicted Deng’s reforms by promoting ziligengsheng (自力更生) or “self-reliance” which is centered on reducing the economy’s dependence on foreign investment. The owners of China’s major real estate firms along with much of China’s elite executive class are not fans of Xi’s attempt to walk back Deng’s capitalist policies. Xi has come to view these business elites as a hindrance to his agenda, says the expert. By forcing Evergrande’s owners to pay off their firm’s debt by selling all of their personal assets, Xi would demonstrate that he is unwilling to bow to the interests of the elite executive class.

While China may still be able to avoid an economic disaster due to Evergrande, steps must be taken by the U.S. to protect itself from possible future Chinese financial failures and political conflicts. For most of the 21st century, U.S. foreign policy toward China was designed to encourage the country’s economic growth through foreign investment in hopes of integrating it into the neoliberal world order. China’s aggressive military tactics, intellectual property theft, and renewed commitment to authoritarianism under President Xi have made it clear that the country is not content with a place in a global order dominated by the West. Clete Willems, the former Deputy Assistant to the President for International Economics during the Trump administration, believes that attitudes are shifting in Washington to reflect the growing need to reduce American firms’ dependence on China.

Minimizing American firms’ investment in China is one of the few issues “currently receiving bipartisan support”, says Willems. Although Washington has finally recognized the need to incentivize firms to back out of China, corporate America is lagging behind. China remains a lucrative environment for American tech firms to manufacture and sell their products due to the country’s high demand and relaxed labor standards. This is one more example of the emerging conflict between “rule by law” and “rule of law” and the inherent advantages offered by the Chinese model. By neglecting to enforce labor laws, China has become an irresistible destination for American tech firms. Democratic countries simply cannot compete.

No matter how President Xi decides to handle the Evergrande crisis, one thing will be made certain: China’s unitary one-party government gives it a unique advantage when it comes to mitigating financial crises and promoting economic growth. Dimon Liu, a U.S. democratic activist, received an insight from a pro-democracy Chinese official during a visit to Beijing in 1995 that eloquently explains current trends: “If the contest is based on (economic) interests, tyranny wins. If the contest is based on values, democracy wins.” The U.S. must frame the competition between “rule of law” and “rule by law” as a fight for the protection of basic human rights. By incentivizing American firms to prioritize democratic values through the implementation of stricter parameters regarding China, they will no longer be compelled to advance Beijing’s authoritarian goals. 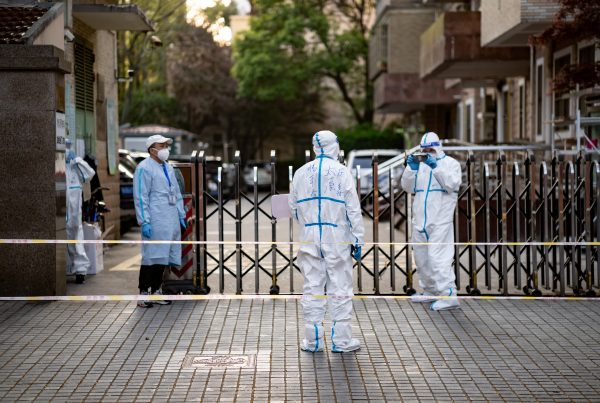