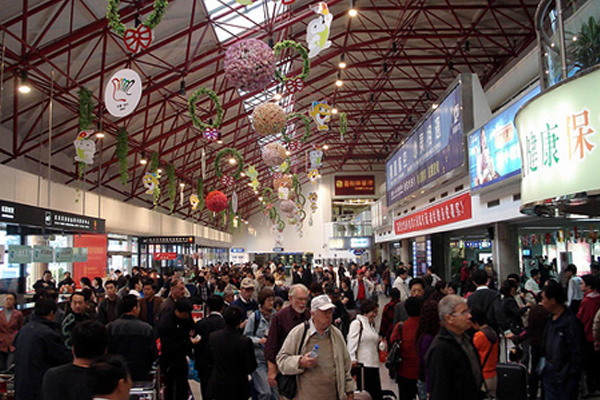 China’s growing middle class wants to see the world and governments are agreeing to make it easier — to the delight of the travel industry.

The majority of Chinese travelers are no longer wearing business suits and carrying briefcases.  Today, leisure travelers account for 85% of all outbound trips, all looking for foreign attractions and shopping.

Tony Chen is one such tourist. He picked Thailand for his holiday vacation because he was interested in foreign attractions.

“When we were little, people always said to go to Thailand for fun and Thailand is close in proximity to China,” Chen said. “Also, we had learned about some things in elementary school, such as the Mangu [Bangkok] elephants, which makes it a unique place to explore.”

And in a break with the recent past, the Chinese government is welcoming this trend.

“The government takes the view that inbound tourism is most important and outbound tourism is a reciprocal act to bind countries to send more tourists to China,” said Roy Graff, managing director of ChinaContact Travel Solutions.

Chinese outbound departures more than doubled in the last five years, from 16.6 million people in 2002 to 40.9 million people in 2007. This increase is primarily due to China’s sustained economic growth since 1978. The number of affluent Chinese has increased dramatically and many are able and anxious to enjoy to travel. In addition, new international agreements and loosening visa restrictions are making it easier than ever for Chinese citizens to travel abroad.

The 2007 Neilsen China Outbound Travel Monitor Report shows that Chinese travelers spend an average of $2,913 per trip per person. Europe is the top dream destination for Chinese travelers, followed by Australia and New Zealand. Although the United States ranks third among the most popular destinations for foreign arrivals overall and sixth in Chinese outbound travel, the number of Chinese leisure travelers to the United States has been tiny. 397,000 Chinese tourists entered the U.S. in 2007, accounting for 0.7% of all inbound tourists according to the U.S. Department of Commerce, making China 16th on the list of international tourism markets to the U.S. In contrast, almost 10.9 million Western Europeans visited the U.S. last year, and four of these countries are among the top ten suppliers of foreign visitors to the U.S.. Nevertheless, Chinese outbound tourism, including travel to the U.S., is expected to grow 20-30% annually for the rest of the decade.

“Another reason [for the increase in Chinese outbound travel] has been the government’s incentive to outbound travel and the increasing liberalization in this area in place since 1983,” said Sandra Carvao, deputy chief in the Market Trends and Competitiveness Section of the United Nations World Tourism Organization (UNWTO).

Currently, China has granted ADS status to 134 countries, up from only 28 five years ago. The United States is one of the most recently approved countries, taking the 95th spot on the ADS list in 2004.

The latest agreement between the two countries called the Memorandum of Understanding (MOU), was made in late 2007 and took effect in June. The agreement is similar to the ADS agreement, but now allows for group travel. Chinese travel agencies can now market tour packages to destinations in the United States. Moreover, United States companies can now market directly to Chinese citizens.

“This has been a very significant step forward in the development of Chinese tourism to the USA, in particular in the leisure group travel segment,” Carvao said. “This will allow a significant jump in the 320,000 [annual] arrivals that the USA receives from China, compared to 2 million in Europe.”  The U.S. Department of Commerce forecasts that this jump could reach almost 58,000 visitors by 2011. And if the growing annual arrivals from far smaller Hong Kong (over 142,000 in 2007) and Taiwan (over 311,000 in 2007), are any indication of what is to come, future forecasts could be even higher.

The major U.S. cities and tourist destinations are poised to benefit from this new agreement. “We are planning to have a strong presence at this year’s China International Travel Mart (CITM) in Shanghai to promote visitation to the Disneyland Resort and Walt Disney World,” said John James Nicoletti, the director of external communications for Walt Disney Parks and Resorts. “We also have dedicated a sales director to focus on business out of China.”

The city of Los Angeles is also looking to benefit. Though a tourism office for the city has been in Beijing since 2006, business is now increasing. “Our office has been receiving an increasing number of calls, e-mails requesting LA brochures and marketing collaterals from travel agencies and travelers,” said Jamie Lee, the regional director for the China office of LA INC., a company that among other things encourages tourism to the city. “Many travel agencies are in preparation for pent-up demand post-Olympics era for the US market.”

Regardless of the destination or whether travelers travel in groups or individually, their reasons for travel vary.

“They include in Asia, shopping, and in Europe, mostly culture,” Carvao said. “On the other side, business travel has also increased exponentially, in a significant part induced by the strong economic performance of China and its increased presence and exchanges in the world economy.”

Leah Liu, a Shanghai resident, says that she loves to travel for the sense of adventure and scene.

“The main reason for traveling overseas is holiday vacations and being able to experience different cultures and opening my horizons,” Liu said. “I’ve been to some Southeast Asian countries, like Thailand, Indonesia, Malaysia, Singapore, Nepal; European countries like UK, Germany, Holland, France, Belgium, and [the east coast of] the USA.”

According to the 2007 China Outbound Travel Monitor, 37% travel for business needs, 19% travel to visit relatives, and 87% travel for leisure. Respondents were allowed to choose multiple answers.

Foreign travel is increasing despite government regulations and the small number of Chinese travel agencies that arrange foreign excursions. According to “The Top 200 China Outbound Tour Operators Directory: Handbook to the China Outbound Travel Market,” the Chinese government allowed only 4.3% of all travel agencies, about 800 out of the 18,000, to organize outbound tours.

Nevertheless, travel agencies and guidebook publishers are eager to tap into the potential that increased foreign travel holds, though some of their methods of luring customers are questionable at best.

The SARS outbreak of 2003 prompted some travel agencies to use “Zero-fee” package tours. These packages gave travelers discount rates on transportation, accommodation, and attraction tickets.

Once the customer took the bait, travel agencies essentially erased the discounts by charging higher rates at restaurants, scenic spots, and souvenir stands, often leaving travelers feeling cheated. According to the July 2007 issue of China Hospitality News, the China National Tourism Administration cracked down on as much of these activities as possible, punishing 21 travel agencies by suspending their business licenses.

However, many agencies and travel companies are succeeding without resorting to illegal means. Group tours are a popular way for many Chinese to travel.

“In general, the main outbound travel products are sightseeing tours conducted in groups,” Carvao said. “In recent years, in Beijing, Shanghai and Guangdong where travelers are relatively matured, travel agencies start to develop new products according to the demand of the tourists such as FIT travel [Free Independent Tourist: tends to refer to people over the age of 35 with an above middle class income who like to travel in small groups], cruise tours, shopping tours and drive-a-car tours.”

“I found it’s quite easy now to travel overseas, especially if you join a group. The travel agency now offers more flexible options for holidays,” said Liu. “They will help book accommodations and transportation, but leave the holidaymaker to decide where [they want to go].”

According to the 2004 “Dujiang and Daibin Annual Report” of China Outbound Tourism Development, around 38% of tourists travel with a member of the family, 20% with friends, and 20% with the whole family.

“Group travel is seen to be increasingly old-fashioned, and loosened visa restrictions and the booming economy are giving younger Chinese the opportunity, funds and inspiration to travel overseas,” Fraser said. “They are curious and adventurous and want to see the world on their own terms – and want to know how.”

Marketing guidebooks for Lonely Planet means not only producing the original English version guidebooks but also producing Chinese guidebooks that are as true to its original version as possible.

Besides strategically making its guidebooks helpful to its readers, the company must also market its books to Chinese consumers.

“From time to time, we run campaigns in bookstores in China around the travel theme—using inspirational photographs and travel stories to inspire Chinese readers to travel,” Fraser said, further stating that it is important to spread the message to Lonely Planet customers that overseas traveling does not need to be a difficult, scary, or an expensive experience.

Chen agrees that there is little to fear about traveling afar, especially when the language barrier does not become a problem.

“In China, everyone has to learn English and if you want to go [traveling abroad] for fun, knowing English is enough.”

As Chinese travelers begin to view their trips as leisure rather than something to fear or endure, the travel market is doing its part in helping travelers adapt to new environments.

“We often focus on providing practical ‘how to’ tools and provide free booklets for attendees at these events to help encourage and enable aspiring travelers to take that first step,” Fraser said.

And today, it seems that more and more Chinese people are taking that first step. As China’s taste in leisure and enjoyment extends beyond China’s borders, the once stringent Chinese government has also started to open its arms to outside world. Let the excursions begin!

Yao Xu is a graduate of the the University of California, Irvine with a degree in English.