Chinese planners hoped for an economic boost from the Olympic Games. But with the worldwide downturn, things are moving in the opposite direction.

A ticket to the 2008 Olympic Games’ opening ceremony ran about US$730 when they went on sale last year, and they’re still selling.

Shortly after the Olympics ended, Market News reported that a used ticket to the opening ceremony could bring its owner thousands of yuan. Eager Chinese collectors started scrambling to the Bird’s Nest Stadium and online auctions. Some tickets were selling for as much as 300 yuan, (US$44). Not bad for a one-week-old antique.

The Games themselves ended up costing about US$43 billion—more than what organizers hoped to recoup in souvenir sales. Rather, the Chinese government hoped the Games would lead to even greater economic opportunities and benefits.

Clearly, one sector the government expected to expand was tourism.

On August 19, the Beijing Foreign Enterprises Services (FESCO) forecast Beijing and Shanghai would need an additional 500,000 hotel staff members by 2010 to accommodate a massive influx of leisure and business travelers.

“These rising demands are attributable to the ongoing Olympic Games, which have stimulated local interest in sports as well as making China an even more popular travel destination for the next two to three years,” said FESCO Recruitment Director Li Yiguang to the China Daily.

But both Olympic and post-Olympic numbers were far lower than expected. Visa restrictions allowed fewer tourists to attend the Games, leaving hotels booked well below capacity on August 8. August saw a 15% decrease in tourism compared to August 2007, and the decreases have continued into September and October (numbers are not yet available for November). And hotels are reacting: Shanghai hotel rates have dropped by over 50% as occupancy rates plummet.

The government hoped that the tourist attractions built for the Games would draw more visitors. The US$423 million Bird’s Nest was constructed primarily for the Olympic Games. Now that the Olympics are over, the stadium will be hosting “large-scale” sports and entertainment performances, and will serve as “an architectural landmark and Olympic legacy,” according to the Games’ official website. The “Water Cube” National Swimming Center will remain open as a swimming center with plans to eventually add a waterpark. Both the Bird’s Nest and the Water Cube have reduced their seating as of the end of the Games.

But the National Stadium and the other athletic venues constructed for the Olympics are still on the country’s payroll; how profitable they are, compared to the costs to maintain them, is something Olympic pessimists will be examining closely.

These numbers may be the result of an ancient post-Olympic curse—one that has haunted most former Olympics’ host countries by slowing their Gross Domestic Product (GDP) growth in the two years following the Games. According to a study by Morgan Stanley, every Olympic host country since 1956 with the exception of Atlanta in 1996 has been plagued by a national economic slowdown that drops below the global GDP average.

Indeed, China’s GDP growth fell to 9% in the third quarter of 2008, the lowest rate for the country in more than five years, and is projected to drop further in the fourth quarter. The Chinese government countered this slowdown by passing a US$586 billion economic stimulus plan in November, which is the most extensive of its kind in recent Chinese history. But experts say the curse isn’t the only source of the problem.

“Most economies in the world today are slowing,” said Edwin M. Truman, senior fellow at the Peterson Institute for International Economics and former assistant secretary of the U.S. Treasury for International Affairs. “Some people forget that China is very much involved in the world, so if the world economy slows down the Chinese economy has to slow down.”

China’s total industrial profit growth during the first five months of 2008 dropped by more than 50% from the same period last year. However, excluding the oil and utility sectors—which have continued to weaken with the global economy—industry profit growth within China actually increased, from 25% to 27% year-on-year.

Just months ago, the Chinese government was focused on controlling inflation. According to Charles Wolf, chair in international economics and senior economic advisor for the RAND Corporation, China’s inflation problem was the result of two factors.

“One is an easy monetary policy; that is, extended bank credit and expanded government outlays.” Those outlays include the extraordinary amount of investments in infrastructure and industrialization that China has made over the past few years, including for the Beijing Olympics.

Some of these rising demands were clearly due to the Olympics. China’s roughly US$43 billion investment in the Games is indeed unrivaled by any other Olympic host country. Moreover, the glamour of the Games has lured international attention more towards China’s financing of the Olympics and the intense national spirit around it than the country’s other economic efforts. 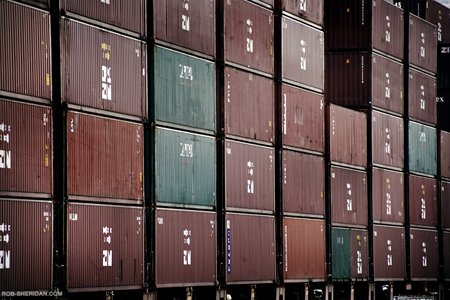 Containers such as these are coming in fewer numbers today. Photo by Rob Sheridan.

But with the economic downturn, exports have declined drastically as overseas markets (and particularly that of the U.S.) have dried up. The government’s priorities have now changed—as prices fall, the government has released a US$586 billion stimulus plan and the central bank has even announced interest rate cuts to encourage growth.

“My guess is that the slowing that we’ve already seen in the second quarter in China is going to continue … and spill into 2009 as well,” said Peter G. Hall, chief economist for Export Development Canada. “And that might be blamed on the Olympics, but I would say that it is something far greater than the post-Olympic effect.”

The economic stimulus package is one way the country is trying to modulate and appropriate the country’s poor economic climate. Arguably, though, China’s future depends on something else: the Chinese people.

“The real question is how Chinese consumers are going to feel after the Olympic euphoria and the gold medals go away,” said Andrew Bernard, director for the Center of International Business at Dartmouth College.

With the Western world striving to survive the current financial crisis, and consumers in America and Europe spending far less than usual, many government officials are looking to China to pick up the slack. However, China’s consumers are known for their ample ability to save, not spend. China’s national savings rate for 2007 was more than 50% of the national GDP, according to the National Bureau of Statistics of China. The personal savings rate last year was a record 30%, (staggeringly high compared to the U.S. rate, which has fluctuated around 3% for over a decade). But the central government is trying to change the habit of saving to spending.

“The Chinese government is trying to reform China to be more consumer-oriented rather than export-oriented,” Shaun Rein managing director and founder of the China Market Research Group, wrote in an e-mail.

In order to do so, the Chinese government has gone to great lengths to develop models for delivering reliable health care services and education to families, especially in rural areas. According to Calla Wiemer, a consultant for the Asian Development Bank, this helps prevent households from having to save money to pay for those services, which will in turn help drive consumption.

“But the big trick here is that it’s not easy to deliver services like this in a poor, largely rural country,” Wiemer said. “So the government has been, on kind of an ad hoc experimental base, developing ways to deliver these services through government reforms and the rural cooperative [medical insurance system]. But there’s not that much money going through the system, and that’s where the opportunity is to accomplish a lot of things—both the move to more consumption and improvements in standards of living at the bottom end.”

For people outside of China, like the EDC’s Hall, China’s export-to-consumer economic shift means a grim future in business.

“It’s going to be a difficult time for Canada and other nations trying to sell into China,” Hall said.

At the same time, RAND’s Wolf remains cautiously optimistic. “China will still be and should still be a big exporter,” he said. “It’s a question of shifting at the margins from 40-45% savings plus to maybe 35% savings.” A high savings rate makes possible a high investment rate, and as China’s industrial capacity grew, export prices lowered.

Consequently, this shift directly contrasts the U.S. approach to its financial crisis.

“The China macroeconomic restructuring is ironically pretty much the 180 degree opposite of what the U.S. macro-economy needs to restructure and adjust,” Wolf said. “[China] needs to boost consumption and expand the domestic market, both for the benefit of the 1.3 billion people in China-especially in the central and western provinces-and to provide more of an opportunity for imports to expand while placing a little bit less emphasis on exports.”

Meanwhile, U.S. leaders hope to do “just the opposite: raising our savings by 4 or 5% of U.S. GDP, and living more or less within our means rather than exceeding them as we have for the past 10 years.”

Both the U.S. and China certainly want to change their spending habits over the next decade, and each country has their own multi billion-dollar scheme to help them do so. However, it’s clear that this crisis will not be short-lived, and that the Olympic euphoria is long gone.