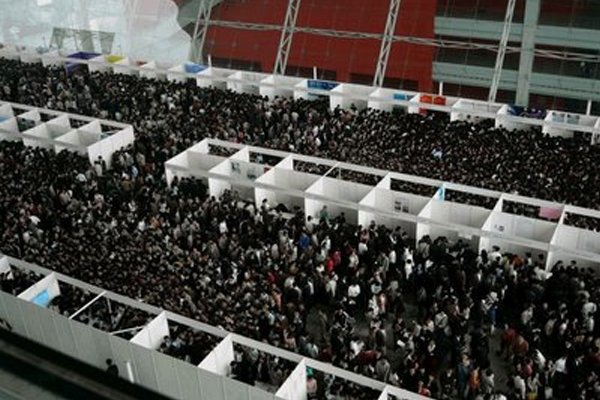 For centuries in China, advanced education guaranteed most secure jobs and good incomes. With the slowing economy, growing numbers of college grads are finding it hard to get jobs.

In China, more than 7 million college graduates will search for employment over the course of this year. Add that to an anticipated 20 million migrant workers who will be out of work this year as a result of closing export-fixated factories, and a population the size of Malaysia is without an income and growing restless.

Of course, China isn’t the only country troubled by unemployment woes since the entire global community was hit by the financial crisis last year. But for a country whose newly acquired status as an economic Goliath rests on a sustained GDP growth in the government’s eyes (far short of the double-digit expansion of China’s pre-economic crisis days) as well as the PRC’s legitimacy in the eyes of its citizens, any David-like protest among the unemployed is bad news.

China’s government is taking action. Last December, top officials met to address the issue of unemployment among college graduates. According to a statement issued through the government website, the State Council announced its decision to make employment for graduates a top priority. At the end of January, the State Council announced a plan to provide additional job training for new graduates as well as financial incentives to both graduates and companies.

While the plight of unemployed migrant workers is also cause for concern, the government sees the recent graduates differently. The graduates have higher expectations, there’s been greater investment in them, and the country wants to depend on them to be managers and entrepreneurs helping to move beyond lower levels of production. When a significant portion of a country’s population—more than 12% to be exact—consists of unemployed college graduates who often feel entitled to better job support, there’s good reason for the Chinese government officials to start wringing their hands.

“The expectations of migrant workers and college graduates are different,” said Zhao Litao, a research fellow at the East Asian Institute at the National University of Singapore. “Migrant workers from the very beginning found jobs on their own or through chain migration, without much involvement of the government; in contrast, college graduates were guaranteed a job by the state from the 1950s to the 1980s. They [feel] they have the right to demand a job.”

For years, the Chinese Communist Party has staked their legitimacy in a growing economy. Therefore, a slowing economy along with rising unemployment rates has the potential to damage this legitimacy. What’s more, an educated population—in contrast with a laboring class that may not have the resources to successfully channel its discontent to bring about significant governmental action—may have enough of the communications and organizational savvy necessary to upset the carefully guarded political order in China.

“I think the main issue is that this is a group the government has to be careful of—articulate, aspirational, and pretty demanding,” said Kerry Brown, a senior fellow of the Asia Programme at Chattham House.

And if this generation is not demanding, they are certainly selective, with a clear idea of what they want out of their jobs—particularly with regards to salary, job security, and prestige.

“At the famous universities, the students all have very high goals,” said Jing Lin, professor of international education policy at the University of Maryland. “They want to be white-collar professionals making a salary that’s higher than average. They want to work in major cities and government organizations.”

Wang Mo participated in a total of three large-scale job fairs before landing the right job: a marketing position with Japan’s Matsushita Corporation. Three job fairs may not sound like much, but in China a single large-scale employment fair will attract more than 25,000 students, all of whom are anxious enough to collectively shatter glass doors and damage other property in the process of making sure that their résumés get handed in to a prospective employer.

“I am a marketing major, and with my major I should easily be able to find a job, but the major issue for me was [finding the right] salary,” Wang said. “Therefore, I was very cautious about choosing the company that I went into,” he said, admitting how selective he had been about choosing his job.

The over-arching problem, however, has to do with the increasing enrollment of college students. In 1995 only 4% of the population went on to pursue a college education after high school; now the number has risen to approximately 10%.

“The job market over the last 15 years has been liberalized, so the government really doesn’t arrange work the way it used to,” Brown said “That’s fine when the economy is good and jobs for graduates are being created. But it’s not so good, as now, when the economy is going through a difficult period.”

The reason for the influx goes back to the government’s decision to increase college matriculation in 1999.

“The mentality of pursuing a college degree has always been there,” Zhao said. “So, the higher education expansion did not begin with a change in social mentality. In the aftermath of the 1997 Asian financial crisis, China’s economy was affected. Also, China was restructuring SOEs [state-owned enterprises], resulting in a massive layoff of SOE workers. Against this backdrop, China decided to expand university enrollment to stimulate domestic demand and to postpone labor market entry for high school graduates.”

Who would have known that a second and even greater economic crisis would come in time to obstruct China’s employment plan?

“I think it is catch-22,” Brown said. “[China] need[ed] to build up human capital, and in some senses has been the victim of its own success—too many, too fast.”

But at the same time, Brown said, “People can’t be denied the right to an education and it is good China has been able to deliver this to so many.”

Yet the methods used by the government so far have not done much to scale back the ever-increasing unemployment rate among college graduates.

“The non-state sector has been mopping up many graduates, especially in the more hi-tech and creative sectors,” Brown said. “But now that many of these companies are being hit by the same issues of credit, liquidity, etc. as the rest of the world, they are needing to scale back.”

The government is also trying to encourage grads to take jobs in smaller cities and rural areas.

In the December cabinet meeting discussing unemployment, the State Council announced that students’ rural salaries would be supplemented by government dollars, which can then help students pay off their college loans.

In the countryside, students can work as teachers or assistants to rural officials. According to Bloomberg.com, the government has already recruited 20,000 people to participate in the program and has plans to expand recruitment by 100,000 by the year 2012, “but this covers only a tiny number of college and university graduates,” said Gerald Postiglione, a professor of education at the University of Hong Kong.

“It is probably an idea worth trying,” Brown said, “but I can’t see it as a long term solution. These graduates have been working hard in order to get away from the less developed areas of the Chinese economy, not be sent there.”

The government argues that college graduates’ migration to the countryside will help bring the rural areas more up-to-date, connecting villages to the technology and education that have traditionally only been available in cities. However, most grads are unwilling to make the move, despite the high unemployment rate in the major cities.

Some students are beginning to recognize this, however. “Going to the countryside sounds like a good alternative,” said Bian Xiaojie, a 20-year old Beijing resident who is in filmmaking management at the Communication University of China. “In fact, many college students are originally from the countryside, and returning to their hometowns to serve the community with the knowledge they have learned seems like a good deed.”

Perhaps more promising than sending graduates to the countryside, would be the development of more vocational schools to cater to the need for skilled workers on the job market. The CSLA China Purchasing Managers’ Index stated that China has plans to further enlarge secondary vocational education by recruiting around 8.4 million students in 2009.

However, it is the vocational schools that are teaching the skills most grads need in this market, as opposed to the top-tier curricula. “Many famous universities now in China try to give students a more liberal arts education,” Lin said.

But with unemployment numbers rising, priorities are changing. “Government policy in higher education is focusing more on vocational and technical higher education to ensure it will be more in tune with the rapidly shifting needs of the job market,” Postiglione said.

Many second-tier universities focus on skills and practical experience to better equip their students for the job market. Yanbian University in northeastern China has a large Korean program initially intended to serve the Korean immigrant population of the area, but is now utilized by Chinese students to gain the language skills necessary to find jobs with South Korean companies. Other universities also encourage their language programs, and also maintain relationships with local companies to give students opportunities to gain experience.

But for those who have already graduated, these programs no longer apply. Indeed, the immediate future remains bleak for many recent grads. The days of higher education guaranteeing high-level, urban jobs are over.

Said Lin, “overall, there’s no guarantee of success anymore in the job market.”

Jesica Chang is an undergraduate student at Colby College.