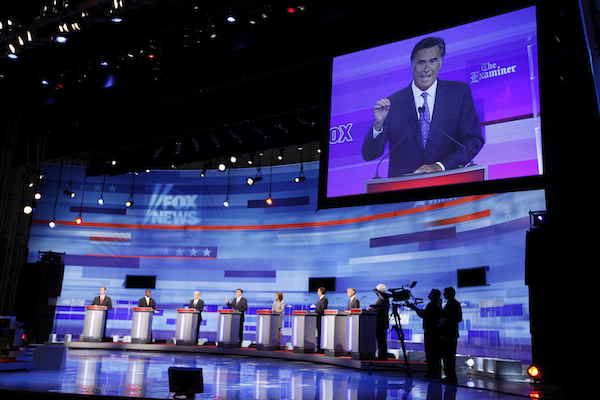 The China Card: China in the 2012 U.S. Presidential Race

While “China bashing” is not a new tactic in U.S. presidential races, a sluggish economy and public anxiety over China’s growing international influence has candidates eager to point fingers.

In a packed high school gymnasium in New Hampshire, former Governor Mitt Romney, flanked by Senator John McCain, answered audience questions in a town hall forum. McCain formally announced his support for Romney earlier that day, and the two men stood together at the center of the crowd. After fielding tough questions from an Occupy Wall Street supporter and a health-care reform advocate, Romney handed the microphone to a middle-aged woman in the crowd.

“I’m Chinese and I’m American, and I love this country. I heard all these degrading things about China this and China that, and it just doesn’t make me feel good.”

Romney handled the comment with finesse that day, but his campaign’s continued negative tone towards China has left some election watchers perturbed. While “China bashing” is not a new tactic in American presidential races, the continued weakness of the U.S. economy coupled with a year of tumultuous international events has candidates itching to point a finger at China to rally voter support.

China on the Campaign Trail

In 1972, President Richard Nixon visited China, jumpstarting a historical turnaround in U.S.-China relations after two decades of Cold War animosity. With the official exchange of diplomatic relations later that decade, the role of China in U.S. economic and foreign policy decision-making quickly moved to the center. With it came a continued pattern of tough campaign talk in the run up to presidential elections.

“China has been an issue in campaigns dating back to the 70s,” says James Mann, author of About Face: A History of America’s Curious Relationship With China. “High level officials in China have seen and lived through a lot of American campaigning and they know, perhaps as well as American scholars of China, what people say during the campaign does not necessarily indicate what they’re going to do once they’re in office.”

The 2012 race has seen no shortage of provocative language about China. Speaker Newt Gingrich declared a need to “raise the pain level for the Chinese cheating” while Governor Rick Perry predicted that China “is destined for the ash heap of history because they are not a country of virtues.”

Presidential hopefuls are drawing on discontent from blue-collar workers who have seen their jobs displaced overseas and growing anxiety about the world’s second largest economy. According to a 2011 poll by the Pew Research Center, 46% of the U.S. believes China already has or will overtake the U.S. as the world’s leading super power.

“The way the candidates talk about China is a means in which they can address voter’s economic anxiety,” says Dan Schnur, a political strategist for McCain’s 2000 presidential campaign.  “Even though most voters don’t have a strong sense about what would be a helpful or unhelpful policy approach toward China, they have an innate sense that China is benefiting at the expense of the U.S.’s economic interests, so they want to see a candidate sounding forceful.”

All Bark and No Bite

Current G.O.P. frontrunner Romney has provided some fiery words, accusing the country of “stealing our intellectual property” and stating that he will “clamp down on China.” If elected, such talk could have diplomatic repercussions down the line. While the G.O.P. candidates are eager to make aggressive claims about their stances on Chinese foreign policy, the remaining frontrunners possess little foreign policy experience.

Former G.O.P. candidate Jon Huntsman served as U.S. ambassador to China and Singapore, yet withdrew from the race following a third place finish in the New Hampshire primary. Huntsman drew criticism for serving as ambassador under President Barack Obama and found himself the target of negative campaigningbecause of his expertise in China.

“Huntsman sometimes spoke Mandarin in his speeches meant to illustrate his expertise in foreign policy but it just struck a lot of people as showing off,” says John Pitney, Professor of American Politics at Claremont McKenna College. “It would be as if a candidate with an engineering background stopped in the middle and solved a differential equation.”

In a November CNBC debate, political commentator Maria Bartiromo asked Romney point blank, “How would you crack down on China?”

Romney responded, “Well, number one, I would do something this president should have done a long time ago, which is to label China a currency manipulator.”

Cheers met Romney’s statement from the crowd, but the labelling of China as a currency manipulator has the ability to damage both U.S. and Chinese interests. Critics of China’s monetary policies contend that the value of the country’s currency is kept artificially low to keep export prices low, thus making expensive American goods less attractive on the global market. According to Romney, the designation allows the president “to apply tariffs to any of their goods where the president believes that their unfair trade practices have cost American jobs or killed American industries. Some speculate that if the U.S. designated the country a currency manipulator, China would retaliate with similar penalties on U.S. imports.

The Obama administration avoided labelling China as recently as Dec. 2011 when the Treasury Department released its semi-annual report. However, some experts disagree on the gravity of the term and its economic implications with China.

“The problem is that it doesn’t mean anything,” says Douglas Paal, vice president for studies at the Carnegie Endowment for International Peace. “If you designate China a manipulator the only action required under law is that you have to talk to China, which is not exactly overwhelmingly impressive.”


Obama has had a relatively successful term with regards to foreign policy. According to CBS, 77% of Americans approve of his decision to withdraw troops from Iraq, and his administration is credited with the killing of Osama Bin Laden. In January of this year, Obama made a sweeping reduction in the size of the U.S. army but stressed the placement of armed forces in Asia.

“I can only see a very much mixed rhetoric,” Zhang says. “[Obama’s] strategic and economic dialogue is kind of institutionalized, the Chinese have a very deep seated suspicion in what this return to the Asia pacific or engagement with Asia means.”

During his term, Obama has made tangible efforts to engage strategic economic and political allies in Asia including official state visits to Indonesia, India and Japan. Obama also has supported the creation of a “transpacific partnership” linking economic interests of the Pacific Rim in a free trade zone. In Nov. 2011, Obama announced plans to deploy 2,500 marines in Australia within the next year. The forces will train at Australian facilities in Darwin, a base located at the north tip of the continent, with close proximity to Indonesia and Southeast Asia.

Referring to the increased U.S. engagement in Asia, Mann says, “No matter how the [Obama] administration describes it, China is one of the main factors.”


Despite tight censorship controls and filtered media messages, the Chinese public is eagerly watching how the U.S. presidential race will play out and what the outcome might mean for the U.S.-China relationship.

“Listening and watching how [the U.S.] leadership talks about China fascinates the Chinese audience and appeals to their nationalistic inner-self,” says Dr. Sow Keat Tok, a research fellow for the Global Studies Institute, Hong Kong. “The U.S. president is more often than not seen by the Chinese as an extremely powerful figure capable of determining U.S. policy as well as those of its allies and the West in general towards China.”

However, the tightly controlled perspective provided by Chinese media may dilute the relevance of the election.

“Frankly a lot of people in China in the lower end of the economic spectrum who have not a lot of sources of information will see the American election through the eyes presented by the Chinese news media,” Mann says.


Chinese media sources have not shied from commenting on the upcoming election ranging from China Daily’s headline, “China-bashing in GOP election ‘no cause for concern’” to a Xinhua editorial, “China bashing is bad campaign politics.”

“While it is too premature to predict future developments in US-China relationships, we can anticipate more tensions between the two countries on issues of overlapping interests,” Dr. Tok says.

With the Communist Party leadership transitioning later this year, the second half of 2012 promises to be a significant moment for the U.S.-China relationship. Until the political landscape is determined, one Chinese Sina Weibo user offers her commentary on the U.S. election.

“It seems like criticizing China is the easiest way to win votes in the U.S. election.”


For more resources on China in U.S. political campaigns please find the USC US-China Institute’s 2008 documentary Election ’08 and the Challenge of China and Talking Points, Nov. 2010.