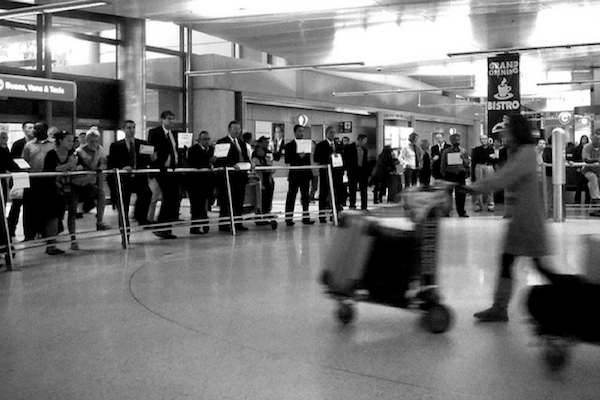 Amid the commotion of shuffling lines and muffled voices, Tina Tian sits in disbelief outside the U.S. Embassy in Beijing. Her head hung low, Tian’s phone rings. She answers her father’s call with a sigh of resignation.

Five years later, Tian still remembers the disappointment of being denied an entry visa to visit the United States.

“I want to visit America because it is a superpower,” Tian says, now a recent college graduate from Sichuan University. Despite being denied a visa twice, Tian remains determined. “I am a big Lakers fan, I watch Gossip Girls and love to drink Starbucks. My daily life is very influenced by the United States and that is why I want to visit.”

Though Tian has yet to make the trip, Chinese travelers are landing at U.S. airports in record numbers. In 2011, over one million travelers from the Mainland arrived in the U.S., with hundreds of thousands more pouring in from Taiwan and Hong Kong. With expanding incomes and an eagerness to venture abroad, American politicians and businesses are lining up to greet Chinese tourists at the gates.

Speaking at Disney World in February, President Obama announced his vision to expand international tourism as a means to economic recovery.

“Every year, tens of millions of tourists from all over the world come and visit America,” Obama said. “And the more folks who visit America, the more Americans we get back to work.” With the Department of Commerce estimating that Chinese and Brazilian travelers spend an average of $6,000 per visit, ensuring the U.S. is a top travel destination is more national priority than marketing material.

For Tian, that means the third time may be a charm. Obama’s plan included several steps for increasing access to the U.S., including simplifying and accelerating non-immigrant visa processes, making the Global Entry Program permanent and nominating Taiwan to the Visa Waiver Program. The bottom line for the President’s push?

“We need to help businesses all across the country grow and create jobs; compete and win.”

The U.S. Department of Commerce estimates that arrivals from China will increase by approximately 274% between 2012 and 2016. Last year, arrivals from China were estimated at 1,098,000 and 294,000 from Taiwan. If Taiwan is accepted into the visa waiver program, numbers are expected to rise even more as citizens would be eligible to travel to U.S. territories for 90 days without a visa.

With that number expected to top 3 million visitors from China by 2016, American businesses are preparing for their arrival in a big way.

“The number one reason Chinese tourists come to the U.S. is for shopping,” says Pierre Gervois, President and CEO of China Elite Focus, an agency specializing in wealthy Chinese outbound tourism.

“The second reason,” Gervois continues, “is that the U.S. is well known for their movie stars and Hollywood scenes and they want to do a lot of sight seeing.”

Carol Martinez, spokesperson from the Los Angeles Convention and Visitor Authority, concurs as she says that significant focus is put on accommodating outbound Chinese tourists through measures like setting up Chinese boarding services at major attraction sites. Martinez highlights that the California Travel and Tourism Commission opened tourism promotion offices in Shanghai and Beijing.

Another compelling reason: travel to the U.S. can act as a social status marker for Chinese and Taiwanese.

“If you can afford to visit and purchase many goods from the U.S., it makes a statement that you are living a good life,” says Nancy Cheng, a Taiwan native.

In 2003, the U.S. opened the Group Visa Program for Chinese travelers, making it far easier for large tour groups, athletic teams, and entertainment groups to enter the country. The most important trend, however, is that visitors from China are beginning to travel independently. Cheng notes this phenomenon as, “a perfect example of xuan fu, which means to show off your wealth.”

“The second wave of China’s outbound tourism has started, with more self-organized travelers slowing down and spreading further afield,” says Dr. Georg Wolfgang, Director of the China Outbound Tourism Research Institute. “Increasingly travel-savvy and globally connected, below 45 years and green, the new Chinese tourist is arriving in exotic locations and staying for more than just a snapshot.”

These “new” Chinese tourists are setting a new standard for Chinese outbound tourism and are eager to explore forms of non-traditional tourism.

Ecotourism, increasingly popular with Western tourists, is also catching on with Chinese. The emphasis of nature immersion and outdoor adventures in locations such as Hawaii and Alaska is becoming more appealing as some Chinese look to escape from the hardships of modern urban living.

Mike McCartney, president of the Hawaii Tourism Authority (HTA), forecasts that the number of Chinese visitors to Hawaii will increase annually by 20% from 2012 to 2014, with those who visit consisting largely of young affluent individuals. For this reason, outdoors activities such as golfing, boating, yachting and surfing are being promoted and emphasized in their marketing efforts.

“Mass tourists will stay on the beaten track, but new Chinese tourists can be attracted to lesser known places if they are provided with a good reason to go there which translates again into prestige,” Wolfgang says. “Connecting destinations with the history of overseas Chinese living in that area might also be a good starting point.”

The exponential rise in Chinese tourists has also positively affected the EB-5 and the proposed EB-6 Visa programs. Intended to attract foreign investors, the EB-5 visa program provides foreign nationals a way to gain a green card for a minimum of $500,000 investment for a targeted employment area within the U.S. The program has created 31,000 jobs and has attracted over $1.5 billion in investments through mainly private companies since its inception. With a surge of Chinese tourists in the U.S., hopes are that the number of applicants for the EB-5 and EB-6 programs will also increase. 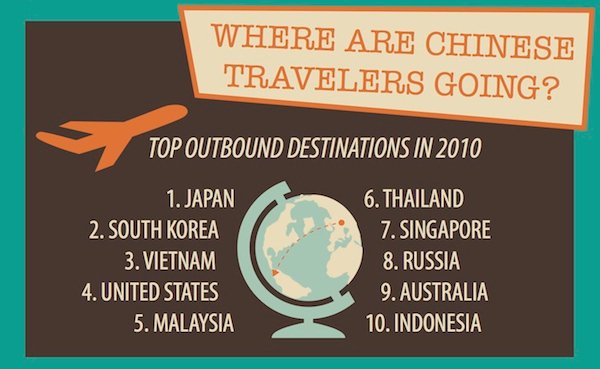 While statistics rise for conventional tourist arrivals, there has been a parallel spike in other “grey” forms of travel.  “Birth tourism,” as it has been labeled, sees wealthy pregnant women travel to birth their babies in foreign countries. Potentially living in the country for months before delivery, babies birthed in the U.S. provide two benefits as seen by these Chinese parents: instant U.S. citizenship and a way around China’s pesky one-child policy.

China has already overtaken Italy, Japan, France and the United Kingdom in terms of international tourist spending. In 2010, the average travel spending per Chinese visitor to the U.S. was at $6,243 followed by India at $6,131 and Brazil at $4,940, while European countries peaked at $3,132. The flood of Chinese outbound tourists offers an obvious potential cash flow. With President Obama acknowledging the need to facilitate travel, the U.S. can anticipate more Chinese tourists in more places across the country.

“The primary motivation to travel to the U.S., besides business and visiting friends and relatives, is to gain prestige and to learn,” Wolfgang notes. “To attract Chinese visitors, these two aspects have to be emphasized, ‘Be the most famous, oldest, greatest in your field and provide a mix of entertainment and education.’”

It should only be a matter of time before Tian is sipping Starbucks at her first Lakers game.

Chia-ling Melody Yuan is a graduate student in Strategic Public Relations at the USC Annenberg School for Communication & Journalism.